Foreign body aspiration is a rare but life-threatening event. Most accidental aspiration events occur in children. In adults, it can represent up to 25% of cases. Bronchoscopy remains the gold standard for diagnosing and treating foreign body aspiration from the lower respiratory tract. A 63-year-old female smoker with a history of chronic alcoholism and exposure to pyrotechnic smoke presented a productive cough, with whitish expectoration, dyspnea and pleuritic chest pain on the right side. On chest X-ray, she presented opacity in 2/3 of the right hemithorax. Computed axial tomography revealed consolidation with an air bronchogram on the right hemithorax, cylindrical bronchiectasis, ground glass pattern and centrilobular nodules. Bronchoscopic examination revealed a foreign body covered with granulation tissue in the right segmental bronchus (B6). The granulation tissue was integrated into the foreign body. In a second attempt, the foreign body could be removed, which was of bone consistency, seemingly a bird bone, confirmed by pathological anatomy results. After further questioning, the patient reported that two years before, she had choked when eating chicken. She had a cough and an episode of hemoptysis, but she chose not to ask for medical advice.

Foreign body aspiration is a rare but life-threatening event, accounting for 0.16 to 0.33% of bronchoscopic procedures in adults [1]. Most accidental aspiration events occur in children; in adults, it can represent up to 25% of cases [2],[3]. It usually presents with a choking event followed by a persistent cough, but it is not uncommon for it to mimic more chronic diseases such as COPD, asthma, and obstructive pneumonia when the initial event goes unnoticed [1],[2],[4],[5],[6],[7]. When the diagnosis is not established immediately, the retained foreign body can cause recurrent pneumonia, bronchiectasis, recurrent hemoptysis, among other complications [8]. Bronchoscopy is the gold standard for diagnosing and treating foreign body aspiration from the lower airways [9]. We present an atypical case of foreign body aspiration with a history of recurrent pneumonia.

We present the case of a 63-year-old woman who smokes seven packs/year, with a history of chronic alcoholism and exposure to pyrotechnic smoke for forty years. She consulted for a productive cough, with whitish expectoration, dyspnea on medium efforts, and pleuritic chest pain on the right side of 3 days of evolution. The physical examination revealed hypotension (blood pressure: 70/50mmHg, mean arterial pressure: 56.7), 38°C fever, oxygen saturation at 93% with a fraction of inspired oxygen at 0.21. She awakens with tachypnea. No cyanosis. On auscultation, vesicular murmurs and decreased vocal thrill were evidenced at the base of the right lung. She was admitted to the Hospital Regional Docente de Trujillo emergency and later hospitalized in the Pneumology Section.

With the diagnostic hypothesis of recurrent bacterial pneumonia, studies were carried out to determine the etiology. In the chest X-ray requested upon admission, a radiopacity was observed in the 2/3 of the right hemithorax (Figure 1).

Laboratory tests: Leukocytosis 22 090 without shift to the left, Hb: 8.5 gr / L; platelet count: 749,000 x mm3; arterial gas analysis: PCO2: 32.4; PO2: 60.6; PaO2 / FiO2: 288.5; A-aDO2: 49.5. The computerized axial tomography, six days after admission, revealed consolidation with air bronchogram at the base of the right hemithorax, cylindrical bronchiectasis with patchy aeration (entrapment), a heterogeneous subpleural ground-glass pattern associated with centrilobular nodules (Figures 2 and 3). She received antibiotic therapy with ceftriaxone 2 grams for seven days associated with inhalation therapy plus salbutamol. In the first bronchoscopy, 13 days after admission, an endobronchial lesion was seen in B6 of approximately 4 cm in diameter that obstructed the lumen. A biopsy (4 samples) was carried out in an erythematous area.

A second bronchoscopy was performed seven days after the first (Figure 4A, 4B, 4C) because of persisting alterations in the right hemithorax in the clinical-radiological control. A foreign body covered with granulation tissue was observed in the right segmental bronchus (S6). The granulation tissue was poorly integrated with the foreign body, allowing it to move from the first bronchoscopy's initial position.

The foreign body turned out to be of bone consistency compatible with the naked eye with a bird bone, which was confirmed by pathological anatomy results 13 days after the second bronchoscopy (Figure 5A, 5B).

When we questioned the patient and her relatives again, they mentioned that she had a chronic cough after choking two years ago when eating chicken, which she did not consider. They also reported that three months before her current hospitalization, she presented an episode of hemoptysis (that lasted two days). She was hospitalized and later discharged with improvement in symptoms with a final diagnosis of pneumonia and bronchiectasis (Figure 5C).

Foreign body aspiration is rare in healthy adults and occurs most commonly in children and the elderly. In adults, the incidence peaks in the sixth decade of life. Adults with foreign body aspiration often have an underlying risk factor, such as neuromuscular disease, altered mental status, facial trauma, endotracheal intubation, dental procedures, underlying lung disease, or either use of sedatives or alcohol. Additionally, adults with a decreased swallowing reflex due to underlying medical conditions are also at increased risk for aspiration. Commonly aspirated foreign bodies include metal objects (pins, screws, and nails), organic objects, including food particles, plastic objects, and teeth. The diagnosis is often challenging to establish, as some patients may not have a clear history of aspiration or may present late. Furthermore, patients can be misdiagnosed with chronic pneumonia, bronchitis, asthma, or malignancy [10].

Foreign bodies usually end up lodged in the lower bronchi or the intermediate bronchus of the bronchial tree and can sometimes be contained for a long time. In the United States, a case was reported of a 42-year-old man who had an aluminum beverage container part chronically retained in the left main bronchus for 12 years [10]. Occasionally, chest radiography shows a radiopaque body or consolidation, atelectasis, or airway effusion. A hyperdense image is often seen on chest computed tomography. Flexible bronchoscopy has become the procedure of choice for the diagnosis of foreign body aspirations in adults. In a case series of 38 314 patients who underwent flexible bronchoscopy, 94 were diagnosed with foreign bodies in the lower respiratory tract, 43 (46%) of them did not have a categorical history of aspiration or visible foreign body in their chest radiography or computed tomography (CT) [11]. Complications of foreign body aspiration include asphyxia, hemoptysis, infection, and post-obstruction bronchiectasis atelectasis. In secondary respiratory tract infections, the inhaled foreign body can act as a carrier of infectious material.

A study of 103 adult patients who underwent bronchoscopy removal of foreign bodies from the airways at a Seoul Tertiary Hospital between January 1999 and March 2017 found that 45 patients did not report to the hospital immediately due to symptoms post-aspiration respiratory tract infections. In 31 of the reported cases, airway foreign bodies were diagnosed during the work-up of recurrent pneumonia [12]. In a case published in Rome, flexible bronchoscopy showed the medial subsegmental bronchus completely obstructed by a foreign body and the lateral one occluded by a mucus-infected plug. The occlusive body turned out to be a peanut. After removing the foreign body, the patient's recovery was rapid, and atelectasis resolved [13]. In cases where the foreign body is lined with bulky and brittle granulation tissue, glucocorticoids may be helpful [14]. In difficult cases, successful extraction often requires the use of a rigid bronchoscope, which allows coaxial passage of various instruments, such as toothed forceps and a suction catheter. This technique presents specific problems because the anesthesiologist and the surgeon share the same space, i.e., the airway, which can lead to various complications (bleeding inside the airway, difficulties with ventilation, among others), so it is not considered as a first option [15]. In the present case, it was possible to extract the bird bone by flexible video bronchoscopy without complications, so it was not necessary to resort to rigid bronchoscopy.

In this patient, despite the absence of information on a foreign body's aspiration, flexible bronchoscopy was requested on two occasions during her last hospitalization due to recurrent pneumonia in the right lower lobe. After two years, a foreign body could be identified and removed from the target area, finally relieving the patient of its symptoms and resolving the infectious pulmonary process.

The current case shows the importance of obtaining a good medical history and being alert to the presence of recurrent bronchopulmonary infection. The clinical history of aspiration seems to be the most common predisposing factor, which, if this information does not exist, can result in a significant delay in diagnosis.

Funding
There was no funding for this work.

Ethical aspects
The family member/guardian's informed consent was obtained both for the diagnostic procedure and for the authorization of the publication of the clinical case.

From the editors
This article was originally submitted in Spanish, the language in which it was peer-reviewed. This English version is a translation provided by the authors that was lightly copyedited by the journal. 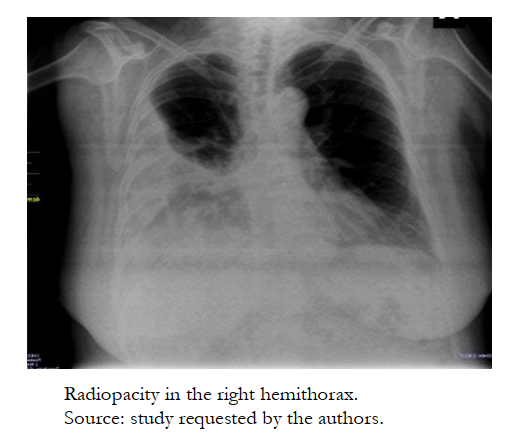 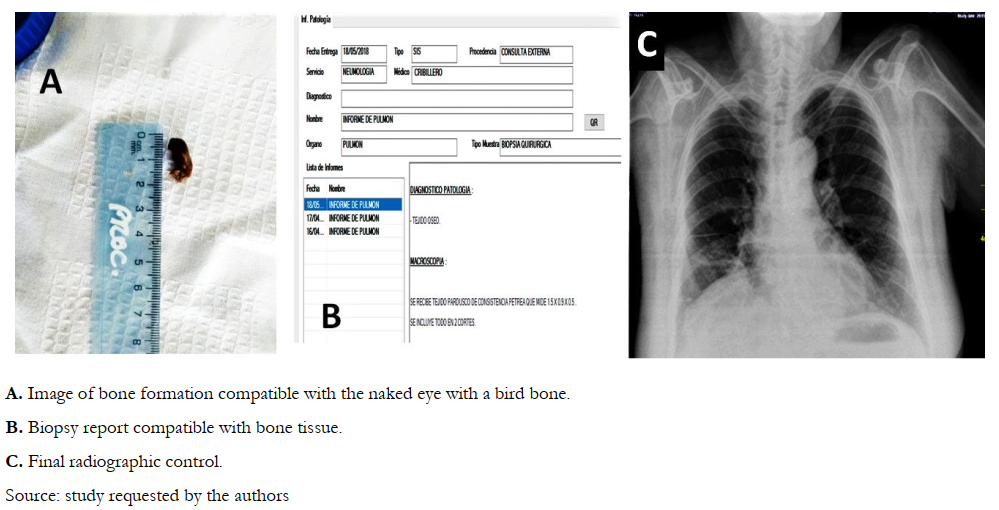