INTRODUCTION
Out-of-pocket healthcare expense represents a challenge for health systems for it constitutes a barrier to health care, impacting the equality of access to healthcare systems, something particularly important in the Chilean health system. In this context, the Government recently raised the possibility of incorporating a tax on imaging tests, creating debate over its potential consequences.

OBJECTIVE
To explore the impact on household out-of-pocket healthcare expense by the implementation of a value added tax to imaging tests in Chile.

METHODS
Cross-sectional study using data of household expenditures from the VII Household Budget Survey. Out-of-pocket healthcare expense and catastrophic household expenses are calculated comparing two scenarios, with and without the inclusion of the proposed tax. Analyses are presented by income deciles to explore the differential equality impact.

RESULTS
42.8% of diagnostic test expense on household corresponds to imaging studies. Under a scenario of tax implementation, a relative increase of 1.1% of out-of-pocket expenses and 2.2% of catastrophic household expenses is observed. The groups that suffer the greatest impact are those with lower income levels, concentrating in the first fifth deciles.

CONCLUSIONS
We conclude that, although the increase in the average out-of- pocket spending is moderate, this policy may involve a significant increase in the catastrophic expense of the population with the lowest incomes, thereby increasing health inequalities. Considering the challenges of health system financing in Chile, it appears that such fiscal policy would only worsen the possibility of moving towards lower levels of out-of-pocket of household expenses.

The out-of-pocket health expenditures  (OOPHE) are those payments made directly by households for health services, usually directly at the point of contact with the health system [1]. It represents one of the most important indicators of health systems to evaluate the ability to deliver financial protection to beneficiaries, central element of any system functions [2]. Likewise, health expenditures are considered catastrophic (catastrophic health expenditures - CHE) when  a certain time period, of out-of-pocket spending exceeds the ability to pay of the household in relation to a defined threshold, leading to a disruption of its life level, limiting access to basic needs such as food or clothing [3].

In this context, a major controversy emerged after the Chilean Internal Revenue Service (Servicio de Impuestos Internos) in a recent circular [8] raised an amendment to the criteria of what constitutes services subject to payment of value added tax (VAT) extending it to imaging tests (X-Rays, ultrasounds, CT-Scans, MRI, PET). This could potentially affect prices and the population ability to access health services in a context of high out-of-pocket health expenditures. In Chile, the public insurance (FONASA) and the public network of health providers are exempt from value added tax (VAT). Meanwhile, the private sector is subject to VAT in the context of services that are delivered within the health definition of clinical laboratories [9], which had been proposed for an extension to include the imaging studies.

This discussion is framed into a broader reflection. Chile has a tax structure with high representation of excise taxes, especially value added tax (VAT), which accounts for 51.3% of tax revenues (33.1% in the Organisation for Economic Co-operation and Development, OECD, countries) by 2010  [10]. The regressive nature of this type of tax structure, generating a relatively higher tax burden in lower income groups, has been a topic of discussion and concern  [11],[12], whereby increasing goods and services subject to value added tax with revenue purposes is questionable and may negatively impact the fairness and equity of the system.

Against this background, the scenario can be analyzed from at least three dimensions. First, the administrative-law dimension, which must pronounce on the legality of the amendment. Second, the tax perspective in relation to fiscal policy, their redistributive impact and the structure of the tax burden. Third, the health perspective on the desirability of such a tax, based on its potential impacts on the financing sources of the health system and the population's access to health services. This study is part of this third dimension, seeking to explore possible scenarios on the impact on out-of-pocket health expenditures of Chilean households with the implementation of a value added tax to imaging tests in Chile.

An initial estimate is presented as an approach to address potential impacts of out-of-pocket spending on health and catastrophic household spending in the context of Chile.

Data analysis
The analysis used as source of information the VII Household Budget Survey carried out by the National Statistics Institute (Instituto Nacional de Estadísticas) of Chile, whose main objective is to obtain detailed data on household expenditures for calculating the Consumer Price Index (CPI). Its latest version conducted from November 2011 to October 2012, considers a probabilistic, stratified (by geographic area and socioeconomic classification) sample design in two stages (blocks and houses), with a total sample of 13,056 households. It has representation of the regional capitals of the country [13], so it only allows inference for large urban areas.

The survey variables are organized according to the classification of individual consumption by purpose (COICOP) in three levels of detail: division, group and class. It is of particular interest for this study division 6 concerning health expenditure having sub-codes allowing disaggregation expenditure at levels of imaging and laboratory tests.

Based on the same definitions of expenditures for each scenario, catastrophic household spending is calculated based on the methodology of Xu – WHO [14],[15], calculating the capacity to pay of households from data VII Consumer Expenditure Survey, considering a threshold of 30%.  Thereby defining a household with catastrophic expenditure as one whose out-of-pocket health expenditures  exceeds 30% of  living expenses, consistent with previous studies in Chile [6].

To consider the potential equity differential effects, differences of impact in each decile of total household income available in the same household budget survey are analyzed. All results are presented using the expansion factors of the survey. Analyses were performed using STATA statistical software 13.1.

The first element to be highlighted in the analysis is that diagnostic tests represent about 13.2% of health expenditures of households (see Figure 1). Of these, 42.8% are imaging tests (see Figure 2), corresponding to 5.6% of total health expenditure. In the case of addition of value added tax payment, the total representation in health spending would increase to 6.4%, corresponding to an increase of 14.2%. 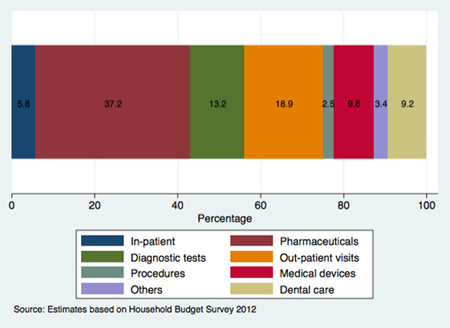 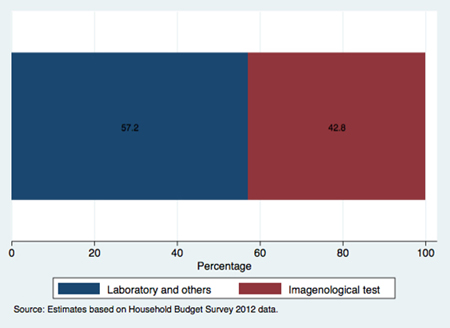 Figure 2. Distribution of out-of-pocket health expenditures by type of exams.

Table 1 shows the aggregate results, comparing the baseline and alternative scenario. It stresses that the introduction of value added tax on imaging tests could lead to an increase of 1.06% of the average monthly out-of-pocket health expenditures by household. In the case of household catastrophic health expenditure, this would imply an absolute increase of about 0.1% and a relative increase of 2.2%.

When analyzing the results disaggregated per deciles of total household income (Table 2), it can be seen that the groups that would receive the greater impact are those with lower income levels, focusing on the first five deciles. Particularly between the first and the third decile, relative increases of out-of-pocket and catastrophic health expenditures rise above the population average and much higher than those in higher income deciles.

The expected evolution over time in the structure of financing health systems is that, along with increased spending, growth from pooled sources is greater than the increase in out-of-pocket expenditures [16]. This transition to a higher percentage of spending from pooled sources is in the expected direction to help fulfill the goal of achieving universal health coverage [2].

The above places special challenges to Chile, as pocket spending is still one of the main sources of funding. While there is variation between the reported figures, it is estimated that this corresponds to 33-40% of total health expenditure [4],[17]. This ranks Chile as one of the three countries with the highest proportion of out of pocket expense within OECD countries, where the average for 2013 was 19.5%.

In this context, the analysis proposed in this study becomes relevant, since so far no estimates are known that take into account the potential impact that the extension of the application of value added tax to the imaging tests, as a policy, could have on out-of-pocket expenditures. Considering these results, it is possible to conclude that, although the increase in the average pocket spending is moderate, this policy may involve a significant increase in the catastrophic expense of the population with lower income.

Some limitations of the proposed analysis should be noted. First, there is uncertainty about the behavior expected from health providers; for instance, they could decide to moderate the transfer of the value added tax increase, diminishing the impact on the final price of services for the consumers. Moreover, for the sake of simplicity we considered a completely inelastic demand in the estimation. This does not allow accounting for the effect that increases in price would have in the unmet demand, especially in groups with less ability to pay, with the potential effects that this might have to decrease timely access to necessary diagnostic tests. An additional element that could appear with price increase is the substitution of tests, between either the same diagnostic tests (on providers of lower costs), imperfect substitutes (change imaging tests to others of lower diagnostic performance) and/or replacement private providers for public providers at the expense of larger waiting lists. Despite these limitations, results provided allow to have a first approach to the subject matter, and are due to be supplemented with future models incorporating greater complexity in the parameters considered in the analysis.

It seems particularly relevant to analyze properly the goals and health impacts of any policy designed to increase the level of copayment and pocket expenses and that this type of evidence is taken into account to inform decision-making in in such a highly sensitive and important area as the access to healthcare services.

Funding
The authors declare that no external funding sources exist.