Sclerosing angiomatoid nodular transformation is a benign vascular pathology of the spleen, developed from the red pulp, of unknown etiology; it is postulated that it may be related to IgG4 disease and Epstein-Barr virus infection. Most cases are asymptomatic, constituting incidental findings in imaging studies. We present a 41-year-old male patient with a history of thyroidectomy for papillary carcinoma who consulted for fever, received symptomatic treatment and performed a computed tomography of the abdomen for nonspecific abdominal symptoms, the same evidence in the lower pole of the spleen a solid-looking image with faint Peripheral enhancement with contrast, measures 62x 52x51 mm. A splenectomy measuring 14x 11x4 cm and weighing 284 grams was performed, identifying a solid, well-defined nodular formation, with a central fibrous-looking area, with whitish tracts that delimited

Sclerosing angiomatoid nodular transformation, first described by Martel et al. in 2004 [1], is rare. The existing evidence is based predominantly on less than 150 case reports [2], many of which focus on radiological images [3]. These lesions are usually solitary, but about six multifocal cases have been reported [4].

This lesion is a benign vascular pathology of the spleen, developed from the red pulp. The etiopathogenesis is unknown, although it is suggested that it may be related to immunoglobulin four (IgG4) disease [1]. Diagnostic criteria for IgG4 diseaserelated sclerosing angiomatoid nodular transformation consists of the presence of a mass, nodular lesion or organ dysfunction, serum IgG4 concentration greater than 135 micrograms per deciliter (reference value between one and 135 micrograms per deciliter), more than 10 IgG4-positive cells per highmagnification field, and an IgG4/IgG ratio greater than 0.4 [5]. Another likely cause is Epstein-Barr virus infection, and some isolated cases are associated with Mafucci syndrome [6]. Most cases are asymptomatic and present as incidental findings in radiological studies [7].

A 41-year-old male patient (engineer by profession) consulted in 2018 for a non-specific febrile syndrome. He received symptomatic treatment for intermittent non-specific abdominal symptoms. As he continued with symptomatology, physicians in charge decided to perform an abdominal computed tomography. He had a history of hypothyroidism treated with levothyroxine 175 micrograms per day due to thyroidectomy for a classic variant papillary carcinoma in the right lobe and papillary microcarcinoma in the left lobe. He had surgical treatment in 2015 and later received radioactive iodine.

Abdominal computed tomography findings showed an abnormal image of the spleen. Given this finding, a consultation with oncology and a contrasted abdominal and pelvic computed tomography were indicated (Figure 1). The new image showed a solid lesion at the lower pole of the spleen measuring 62 by 52 by 51 millimeters with a hypodense center that slightly enhanced peripherally with contrast.

The risk of malignancy encouraged a splenectomy with a laparoscopic approach. Before surgery, the patient received vaccination against influenza, pneumococcus, meningococcus, and Haemophilus influenzae.

In the macroscopic study, the organ measured 14 by 11 by 4 centimeters and weighed 284 grams. A solid nodular formation was observed at the subcapsular level in the lower pole. This mass was well-circumscribed, with a central whitish area of fibrous aspect and whitish tracts defining violaceous areas measuring 4.5 by 4 centimeters (Figure 2).

Microscopic findings showed round coalescent nodules of angiomatoid appearance, in which a slit-like vascular proliferation was lined by endothelial cells without atypia. The vessels were interspersed with spindle cells and inflammatory cells, including lymphocytes and macrophages. The stroma surrounding the nodules was myxoid, and some sectors were fibrous, with a myofibroblastic proliferation accompanied by lymphocytes, plasmacytes, and siderophages. Regarding immunohistochemistry, the vessels were positive for CD34 and CD31, and some areas were positive for CD8 and negative for CD34 (Figure 3). The number of IgG4-positive cells was one per high magnification field, and the IgG4/IgG ratio was less than 0.4. The polymerase chain reaction (PCR) test for EpsteinBarr virus was negative.

Sclerosing angiomatoid nodular transformation is a rare benign pathology with a slight female predominance that usually appears between 22 and 74 years of age (mean age: 50 years). They are asymptomatic lesions that usually appear as incidental findings on imaging studies.

These lesions are solitary masses that can measure from 0.9 to 17 centimeters. Radiologic features are non-specific, and histopathologic study is the gold standard for diagnosis. Macroscopically, they are well delimited non-encapsulated nodular lesions that present a central fibrous scar-like area, from which tracts radiate delimiting pseudo-nodules. The histological study is characterized by angiomatoid coalescing nodules composed of capillaries, venules, and sinusoids, divided by fibroconnective tracts. The internodular stroma consists of dense fibrous tissue with areas of myxoid appearance, scattered myofibroblasts, plasma cells, lymphocytes, and hemosiderophages.

The proliferation rate with Ki67 is low (approximately less than 4%). The etiopathogenesis of proliferation seen in sclerosing angiomatoid nodular transformations may be related to the sclerosing lesions of IgG4 disease since fibroconnective stroma have increased IgG4-positive plasma cells. In our case, the number of IgG4 positive cells was one (measured by high magnification field), and the ratio of IgG4 positive cells to immunoglobulin positive cells was less than 0.4. Therefore, we considered that the lesion is not related to IgG4 disease. The negative marking for the Epstein-Barr virus by PCR would also exclude the association with this virus.

Lymphoid tumors are the most common spleen malignancies, while non-lymphoid tumors are scarcely reported [2],[7] and generally of vascular origin. Although pre-surgical studies may suggest many diseases, once macroscopy and histology are reviewed, the lesions are usually diagnosed as hamartoma, conventional hemangioma, hemangioendothelioma, littoral cell angioma, and carcinoma metastases [7].

Within the nodules, endothelial lining cells are negative for D240, which confirms a vascular instead of a lymphatic origin. Cao et al. reviewed publications in English and found that 30 of 127 cases (23.6%) coexisted with other diseases, including idiopathic myelofibrosis, bile duct and pancreatic cancer, acute pyelonephritis, and malignant tumors [4]. The authors compared these findings with Martel’s original report and concluded that patients with sclerosing angiomatoid nodular transformation have a relatively high prevalence of synchronicity with diseases in other organs. Therefore, clinicians and radiologists should not automatically assume a splenic lesion coexisting with a malignant neoplasm as tumor metastasis and should evaluate differentials such as sclerosing angiomatoid nodular transformation or other – more frequent – pathologies [1],[4].

Splenectomy is curative, with no reported malignant transformation or recurrence cases to date. Some authors propose laparoscopic hemisplenectomy as the treatment of choice instead of open splenectomy. They suggest that the laparoscopic approach shortens hospitalization days, reduces medical expenses, has fewer wound complications, and offers better cosmetic results.

Although sclerosing angiomatoid nodular transformation has relatively specific imaging findings, the differential diagnosis with other benign or malignant splenic tumors is challenging.

This disease is only recently described in the literature (2004). Therefore, it is necessary to collect a more extensive series of cases and reevaluate differential diagnoses of previous cases to understand sclerosing angiomatoid nodular transformation better. As discussed by Agrawal et al. through their own two case reports and review of the literature (one of them associated with extensive extramedullary hematopoiesis), tumors with the characteristic morphology of sclerosing angiomatoid nodular transformation have been reported (at least) since 1978. Many were previously diagnosed as exuberant splenic granulation tissue, hamartomas, multinodular hemangiomas, or even inflammatory pseudotumors. The disease has been reported intermittently, but new cases with even newer associations appear from time to time.

In Ecuador, Fernandez and Lara published in 2018 a case of sclerosing angiomatoid nodular transformation in a 76-year-old patient with a spleen mass. A laparotomy with splenectomy confirmed the diagnosis by microscopy and immunohistochemistry (CD31+, CD34+), presenting similarly to our case [12].

A case of a 72-year-old male patient diagnosed by an ultrasoundguided puncture was also published. The pathologic study showed fibroblast proliferation, lymphocytes and plasma cells infiltration, and areas with small slit-like blood vessels. Immunohistochemistry revealed the presence of CD31 (+) and CD34 (+) cells in small blood vessels [13].

There are no known risk factors, except for the association with IgG4 and Epstein-Barr virus. In the title of a paper, it has been proposed whether sclerosing angiomatoid nodular transformation is "A new entity or a new name?" [14]. Perhaps this latter possibility is the most appropriate point of view.

Sclerosing angiomatoid nodular transformation is a rare and benign pathology, usually diagnosed through incidental findings. Physicians should keep it in mind in the differential diagnosis of spleen tumors.

Competing interests
The authors completed the ICMJE conflict of interest statement and declared that they received no funding for this article; have no financial relationships with organizations that may have an interest in the published article in the past three years; and have no other relationships or activities that may influence the publication of the article. Forms can be requested by contacting the corresponding author.

Funding
The authors declare no funding.

Ethics
The protocols were followed at the center where the patient data were collected. Authorization was obtained from the Teaching and Research Department of the Homero Castanier Crespo Hospital. 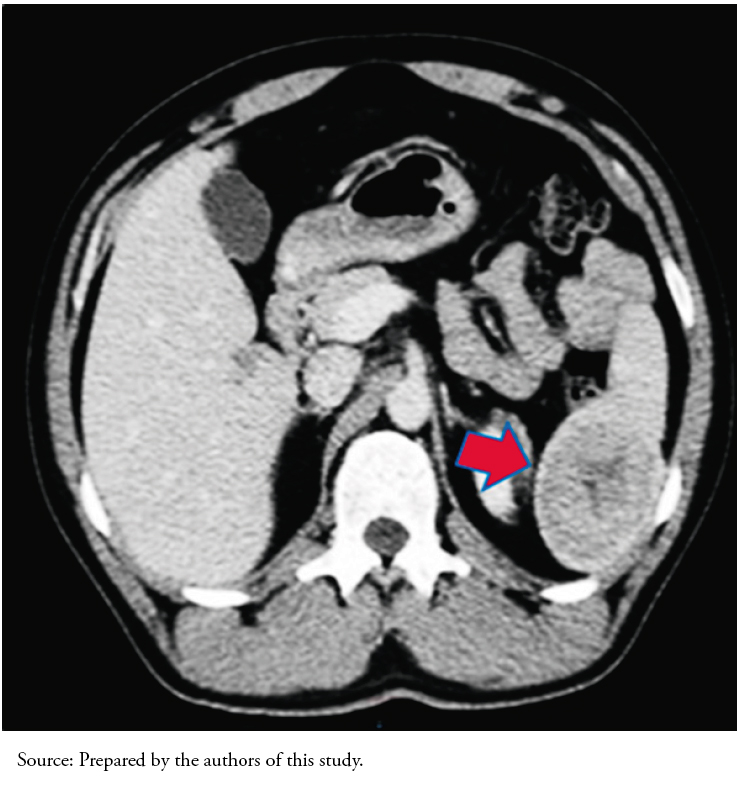 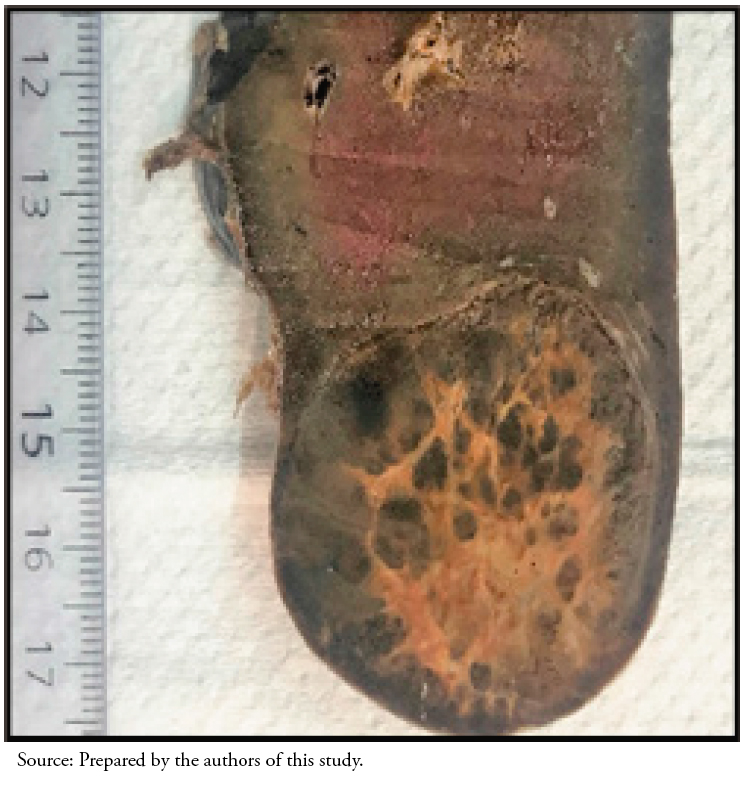 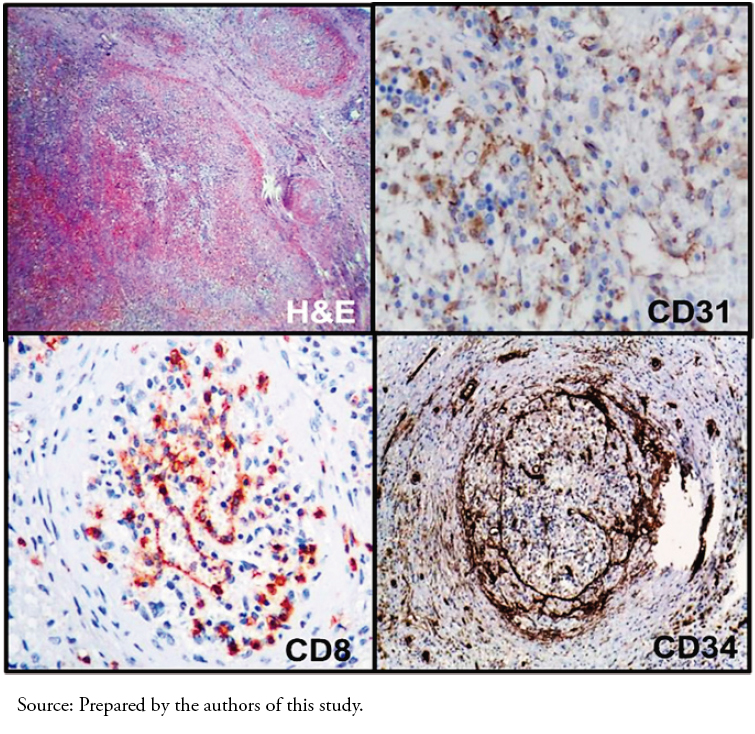