INTRODUCTION
Our institution implemented the use of pre-designed labeling of intravenous drugs and fluids, administration routes and infusion pumps of to prevent medication errors.

OBJECTIVE
To evaluate the effectiveness of predesigned labeling in reducing medication errors in the preparation and administration stages of prescribed medication in patients hospitalized with invasive lines, and to characterize medication errors.

RESULTS
In the pre-intervention group, 5,819 doses of drugs were administered invasively in 634 patients. Error rate of 1.4 x 1,000 administrations. The post-intervention group of 1088 doses comprised 8,585 patients with similar routes of administration. The error rate was 0.3 x 1,000 (p = 0.034). Patients receiving medication through an invasive route who did not use predesigned labeling had 4.6 times more risk of medication error than those who had used predesigned labels (95% CI: 1.25 to 25.4). The adult critically ill patient unit had the highest proportion of medication errors. The most frequent error was wrong dose administration. 41.2% produced harm to the patient.

CONCLUSIONS
The use of predesigned labeling in invasive lines reduces errors in medication in the last two phases: preparation and administration.

In health institutions, safe and quality care has become in recent years a growing concern and it is currently a global priority [1]. Interventions conducted by health professionals, to benefit patients, can cause damage or adverse events [2]; one of the principal adverse events is medication error, [3],[4] defined as “any preventable incident that can cause damage to patients or lead to an inappropriate use of medications when these are under control of health professionals” [5]. The World Health Organization, in the document World Alliance for Patient Safety 2008, states that in acute patient services, between 7% and 10% have presented some event related to incorrect medication administration. At the same time, it indicates that these are preventable within a range between 28% and 56% and that developing countries have higher rates of these events related to medication administration errors [6].

The etiology of medication errors can take place in any stage of the process: prescription, transcription, dispensing, preparation, and administration [6],[7],[8],[9]. The stages most vulnerable to error are prescription and administration, which are responsible for 50% or more errors during the whole process [5],[8],[10],[11], and [12]. In Chile, evidence is still not available that permits dimensioning the magnitude of the complete problem: however, it is known that these errors occur and contribute to the mortality of hospitalized patients [6].

In the institution where this study took place, the hospitalization units are staffed with one professional for every eight patients, and the intensive care unit is staffed with one or two professionals per patient according to severity. Said institution uses a barcode system for medication dispensing and administration, with the nurse or matron, according to the unit, who administers the medications to the patient.

After this implementation, the result of this change was assessed through the following question: In patients with invasive access routes and lines from hospitalized units, emergency, recovery ward, does predesigned labelling system for medication administration diminish the risk of medication errors compared to traditional labelling?

Objectives of the study:

A pre- and post-intervention study was carried out in a private clinic in Santiago de Chile, studying the dosages of drugs administered through invasive lines to hospitalized patients, patients in emergency, surgical ward and recovery. Patients were considered hospitalized if interned in any of the following units: pediatrics, critical pediatric patient unit (CPPU), medical-surgical, mental health, critical adult patient unit (CAPU), gynecology and maternity, and neonatology.

Dependent variable or primary result. Medication error was considered the primary result. It was defined as any error occurring during the medication administration process, only during the preparation and administration stages, whether the error bears an adverse consequence or not [16],[17]. Data collection of medication errors was performed in reference to the notification of adverse events and of the monitoring forms of the event by the quality unit.

1 = A (circumstances or incidents with capacity to cause error).

2 = B (the error occurred, but did not reach the patient).

3 = C (error reached the patient, but without damage).

4 = D (the error reached the patient, did not cause damage but needed monitoring).

All the prior information was obtained from the patient’s electronic file.

Predesigned labelling: comprised of five types of adhesive labels, with pre-established data filled out manually by the professional administering the medication. The five types are the following:

Figure 1. Labels of drug grouping according to color.

Prior to starting the application of the intervention, the researchers socialized the changes in all the study units. Thereafter, the nurses and matrons, who administer the medications, were trained on the implementation of the new measures for one month. The researchers designed a checklist to monitor compliance of the new intervention, which was evaluated through a pilot test. With this checklist, the researchers supervised, periodically and randomly, compliance with the predesigned labelling in the different units throughout the study period.

Ethical considerations
The Clinic’s General Board of Directors approved the study. This board issued a document that states no approval was requested from the Ethics Committee because the work entails an assessment of a strategy for continuous improvement in patient care. This document was delivered to the journal editors. Within the evidence-based practice model used in the clinic, the assessment of the implementation of evidence is the last stage.

The rate of incidence of errors in medication administration during the study period was 0.83 x 1000 doses administered. Of all the errors (12) occurring during el study, 66.6% took place in the adult intensive care unit and 16.6% in the pediatric and medical-surgical units, respectively (p = 0.018). It was noted that 33% occurred during holidays, 58.3% during the day shift, 41.6% in the mornings, and 41.6% at night; 41.6% occurred on Mondays. The average number of medications administered simultaneously, when the error occurs, was three with a range from 1 to 5; 33.3% of the errors corresponded to vasoactive drugs and the same proportion corresponded to sedatives. The most frequent type of error was the administration of incorrect dosage (66.6%), followed by administration of wrong medication and wrong hour for administration. One-hundred percent of the medications was administered via endo-venous route, with 58.3% through central venous access and 41.7% through peripheral venous access; 83.3% was administered in continuous infusion (Table 1).

Table 1. Characteristics of medication administration errors according to type of labelling in the study groups.

The characteristics of the errors are similar to those of other studies, occurring more frequently in the intensive care unit [6], in the morning [8], and administered by intravenous route [9],[25]. The most frequent error was the incorrect dosage [6],[16],[20],[26],[27]. An important number of patients who received an erroneously administered medication suffered some damage, which was reversed with different interventions from the health staff according to the case. The majority of these cases were patients from the critical adult patient unit.

Estimates show that the highest frequency of medication errors occurs in critical patient units [7]. These units use a higher number of medications in patients [6], [28] and patients receive more simultaneous administrations of medications than in other units.

The results are divergent from other authors regarding the type of drugs administered when the error occurs [6],[10]. This would be explained because the populations from other studies are different, that is, for example, only pediatric or only from the critical patient unit; or from special units, like transplants, where the medications to be administered vary according to the types of patients.

Predesigned labelling diminished significantly medication errors in the study population (80%), which shows that it is an important prevention measure. This agrees with other studies that show better efficiency when using colored labelling in intensive care units and emergencies [12],[13], and where colored labels facilitate identifying the correct access of invasive lines [13],[14],[15].

Limitations of the study

The way of measuring errors through notification and not through direct observation may have influenced on the under-reporting of errors.

The type of sampling through convenience affects the study’s external validity.

The effectiveness of predesigned labelling to prevent medication errors was assessed positively during the last two stages of the medication administration process. Error rates were reduced by 80%, which is a reason to recommend the implementation of policies for labelling use, as a quality norm in patient care.

Thus, predesigned labelling represents a support for the health staff, as well as a contribution to other institutions with a holistic vision aimed at maintaining and consolidating the rights of hospitalized patients.

Ethical aspects
The Journal is aware that the Medical Board at Clínica Universidad de Los Andes, Chile, knew about this study and of its possible publication in a journal of biomedical dissemination.

Declaration of conflict of interest
The authors completed the ICMJE’s conflict of interest declaration form, and declare not having received funding to conduct the report; not having financial relations with organizations that could have interests in the published article, in the last three years; and not having other relationships or activities that could influence upon the article published. The forms may be requested by contacting the corresponding author or the journal’s editorial board.

Funding
The authors declare having no external funding sources.

Note from the editor
The principal or responsible author states that this manuscript is an honest, precise, and transparent transcription of the study reported; that no important aspect from the study has been omitted; and that discrepancies between the study results and those foreseen (if these were relevant) have been registered and explained. 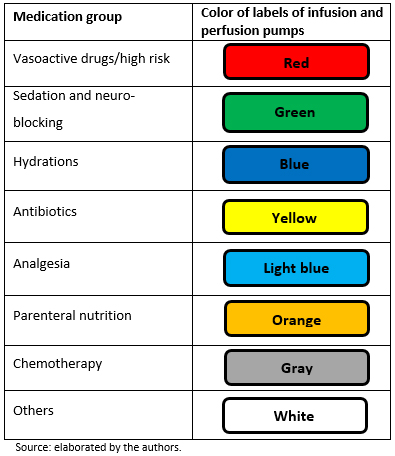 Figure 1. Labels of drug grouping according to color. 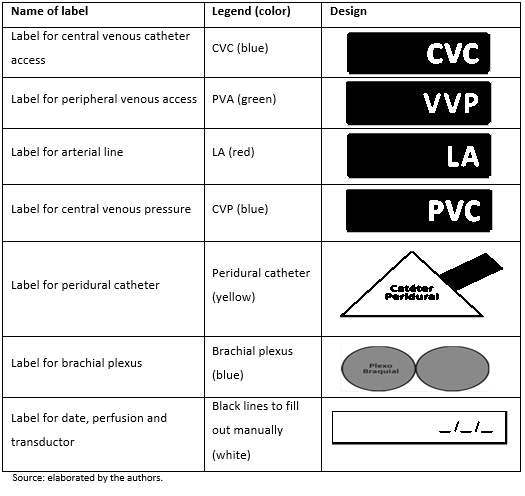 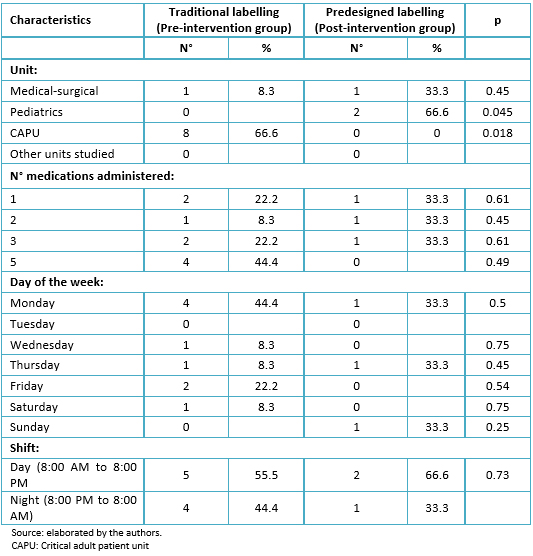 Table 1. Characteristics of medication administration errors according to type of labelling in the study groups.

Australian Commission on Safety and Quality in Health Care; 2012 [on line]. | Link |