Climate change refers to long-term changes in climate conditions and patterns of meteorological events [1]. Even though this may bring some benefits, such as decreased winter cardiovascular and respiratory deaths due to mild weather [2], and improved agriculture in certain areas [3], the overall health effects are overwhelmingly negative and represent a serious problem on a global scale [4],[5].

It is estimated that climate change will be responsible for approximately 250,000 deaths per year during the 2030-2050 period [5] as a product of increased malnutrition in children, scarcity of water, death from heat exposure in the elderly and increased incidence of malaria and diarrhea [5],[6]. Unfortunately, developing countries are the most vulnerable to climate change because they lack the social, technological and financial resources to adapt [6]. Peru, for example, is susceptible to climate change effects since it fulfills seven of the nine characteristics recognized by the United Nations Framework Convention on Climate Change to describe a country as vulnerable: 1) low-lying coastal areas; 2) arid and semi-arid regions; 3) areas liable to floods, drought and desertification; 4) fragile mountainous ecosystems; 5) disaster-prone areas; 6) areas with high urban atmospheric pollution and 7) economies highly dependent on income generated from the production and use of fossil fuels [7],[8].

The future availability of clean air and water, food supplies and the emergence of infectious and non-communicable diseases [2],[5], together with the growing intensity of El Niño, glacier mass loss, the increased risk of landslides, mudslides, and flooding in coastal areas [9] will test Peru in disaster risk management and public health strategies on adaptation to climate change. Several medical conditions could arise from the consequences of climate change in our country. For example, the incidence of infectious diseases (salmonellosis, cholera or dengue) may increase because of overcrowding, collapse of the sanitation systems, or inadequate cooking methods. Non-communicable diseases such as cardiovascular or chronic respiratory diseases could appear due to an increase in humidity and heat stress. Even mental problems like depression or anxiety could occur as a result of house damages, impoverishment and death of family members. Table 1 summarizes the impacts of climate change in Peru, grouped according to the outcomes of floods, high temperatures and droughts, and material damage. This table is based on the work of Friel et al. [2] and the Peruvian Ministry of Health [10].

To counteract the effects of the climate change, the Peruvian government presented the document "Intended Nationally Determined Contributions" at the twenty-first session of the Conference of the Parties. This report describes the mechanisms by which Peru will increase its adaptive capacity to address climate change, mainly based on interventions in water resources, agriculture, fishery, forestry and health via disaster risk management, resilient public infrastructure, vulnerable populations and intercultural approach, and promotion of private investment in climate change adaptation [8]. Considering our high susceptibility, a comprehensive and multidisciplinary approach is needed to plan and conduct early actions for a better adaption to the potential consequences of climate change [4].

The strategies proposed by the Peruvian government will create opportunities to reduce the risk of various diseases. Nevertheless, we must not forget to raise awareness among citizens about the importance of introducing simple changes in daily habits such as boiling water, cooking vegetables and meats, covering water containers, wearing closed shoes, or using sunscreen that will allow them to prevent a fair amount of risks. In the same way, diffusion within small cities regarding the recognition of symptoms of the most common climate-related illnesses so they could attend the nearest health facility, would be a major and effective tackle. This is why it is necessary to highlight and stimulate the importance of promoting, protecting, preserving, and restoring health in the disaster health scenario of climate change in Peru. 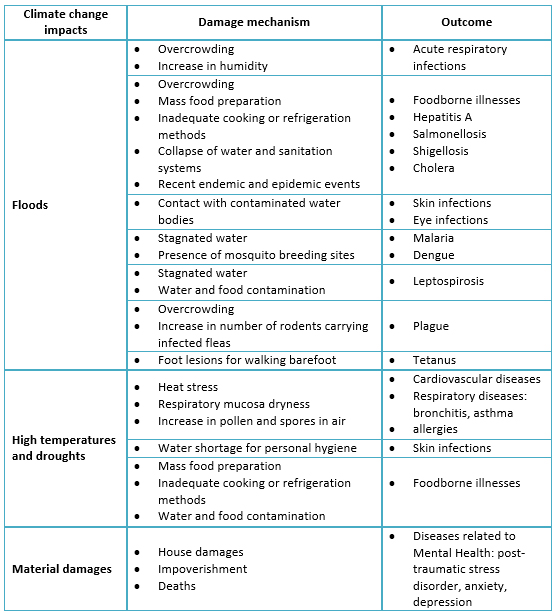