Several techniques have emerged as complement or replacement for trabeculectomy, the standard surgery for glaucoma. Device-modified trabeculectomy is a recently developed technique whose results compared to the classical technique have not been fully defined. To answer this question, we used Epistemonikos, the largest database of systematic reviews in health, which is maintained by screening multiple information sources, including MEDLINE, EMBASE, Cochrane, among others. We identified eight systematic reviews including 34 studies overall. We extracted data from the systematic reviews, reanalyzed data of primary studies, conducted a meta-analysis and generated a summary of findings table using the GRADE approach. We concluded device-modified trabeculectomy probably leads to greater overall success rate and may decrease intraocular pressure more than classical surgery. In addition, this technique would probably have a better safety profile than standard trabeculectomy.

Glaucoma is the second leading cause of blindness worldwide according to the World Health Organization. Among the known risk factors for the development of this disease is the increase in intraocular pressure (IOP). Trabeculectomy is the standard surgery for patients with uncontrolled glaucoma despite medical treatment. The use of devices has been recently added to the classical surgical technique, in order t  promote the flow of aqueous humor from the anterior chamber and to avoid the post-trabeculectomy scaring by maintaining a continuous drainage of aqueous humor. In this line, the use of devices has been proposed as a technique that could improve surgical success and decrease the associated complication rate.

To answer the question, we used Epistemonikos, the largest database of systematic reviews in health, which is maintained by screening multiple information sources, including MEDLINE, EMBASE, Cochrane, among others, to identify systematic reviews and their included primary studies. We extracted data from the identified reviews and reanalyzed data from primary studies included in those reviews. With this information, we generated a structured summary using a pre-established format, which includes key messages, a summary of the body of evidence (presented as an evidence matrix in Epistemonikos), meta-analysis of the total of studies, a summary of findings table following the GRADE approach and a table of other considerations for decision-making.

The information on the effects of device-modified trabeculectomy is based on 34 randomized trials including 1540 eyes. 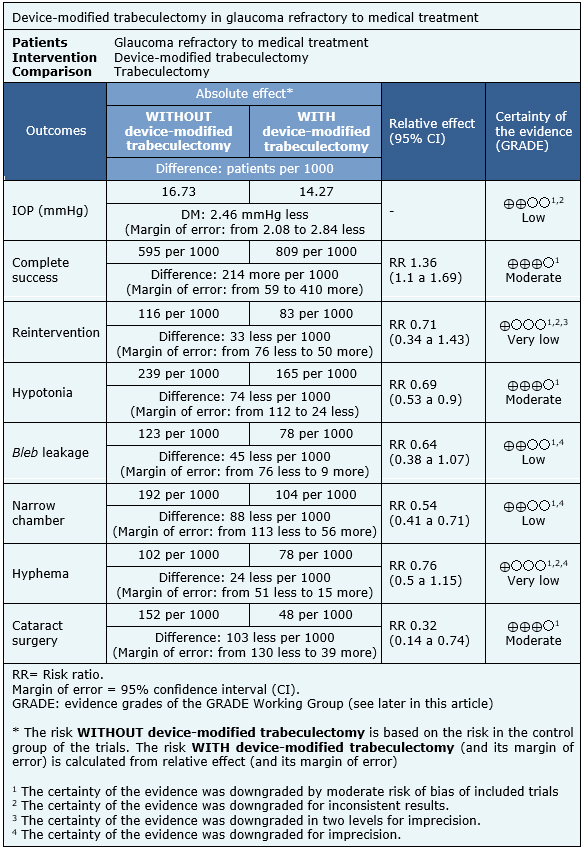 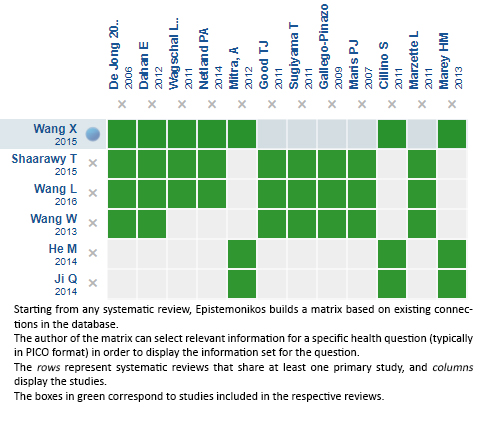 The upper portion of the matrix of evidence will display a warning of “new evidence” if new systematic reviews are published after the publication of this summary. Even though the project considers the periodical update of these summaries, users are invited to comment in Medwave or to contact the authors through email if they find new evidence and the summary should be updated earlier. After creating an account in Epistemonikos, users will be able to save the matrices and to receive automated notifications any time new evidence potentially relevant for the question appears.