INTRODUCTION
Rhegmatogenous retinal detachment is caused by a tear in the retina and is a frequent cause of vision loss. Its treatment is mainly surgical and the following alternatives can be identified: scleral buckling or classic surgery, pneumatic retinopexy and vitrectomy. Between the first two options, most professionals prefer scleral buckling over pneumatic retinopexy, but the latter is a simpler, cheaper and lower-risk procedure, so it is still considered as an option for selected patients. However, there is little evidence comparing both interventions.

METHODS
To answer this question we used Epistemonikos, the largest database of systematic reviews in health, which is maintained by screening multiple information sources, including MEDLINE, EMBASE, Cochrane, among others. We extracted data from the systematic reviews, reanalyzed data of primary studies, conducted a meta-analysis and generated a summary of findings table using the GRADE approach.

RESULTS AND CONCLUSIONS
We identified three systematic reviews including six studies overall, of which three were randomized trials. We concluded the anatomic result might be better with scleral buckling in terms of retinal reattachment and risk of recurrence, but the risk of ocular adverse events might be lower with pneumatic retinopexy.

Pneumatic retinopexy is performed by injecting a bubble of gas into the vitreous cavity, which pushes against the retina, allowing to use photocoagulation or cryotherapy for the retinopexy. Scleral buckling consists in using an encircling element, usually made of silicone, to achieve apposition of the neurosensory retina and the retinal pigment epithelium, with the subsequent repair of the break with photocoagulation or cryotherapy.

Our objective is to determine, using existing evidence, if scleral buckling is truly superior to pneumatic retinopexy.

To answer the question, we used Epistemonikos, the largest database of systematic reviews in health, which is maintained by screening multiple information sources, including MEDLINE, EMBASE, Cochrane, among others, to identify systematic reviews and their included primary studies. We extracted data from the identified reviews and reanalyzed data from primary studies included in those reviews. With this information, we generated a structured summary denominated FRISBEE (Friendly Summary of Body of Evidence using Epistemonikos) using a pre-established format, which includes key messages, a summary of the body of evidence (presented as an evidence matrix in Epistemonikos), meta-analysis of the total of studies when it is possible, a summary of findings table following the GRADE approach and a section of other considerations for decision-making.

The information about scleral buckling versus pneumatic retinopexy is based on three randomized trials [4],[7],[8].
All trials reported reattachment of the retina with single intervention, including 238 eyes. Two trials reported recurrence of retinal detachment at 6 months and visual outcome at 6 months [4],[7]  (218 eyes). One trial reported visual success at 24 months [6].
Two trials [4],[7] (218 eyes) reported ocular adverse events (vitreous hemorrhage, subretinal hemorrhage, vitreous or retinal incarceration, hyphema, retinal perforation) and development of proliferative vitreoretinopathy, which is the main cause of surgery failure. 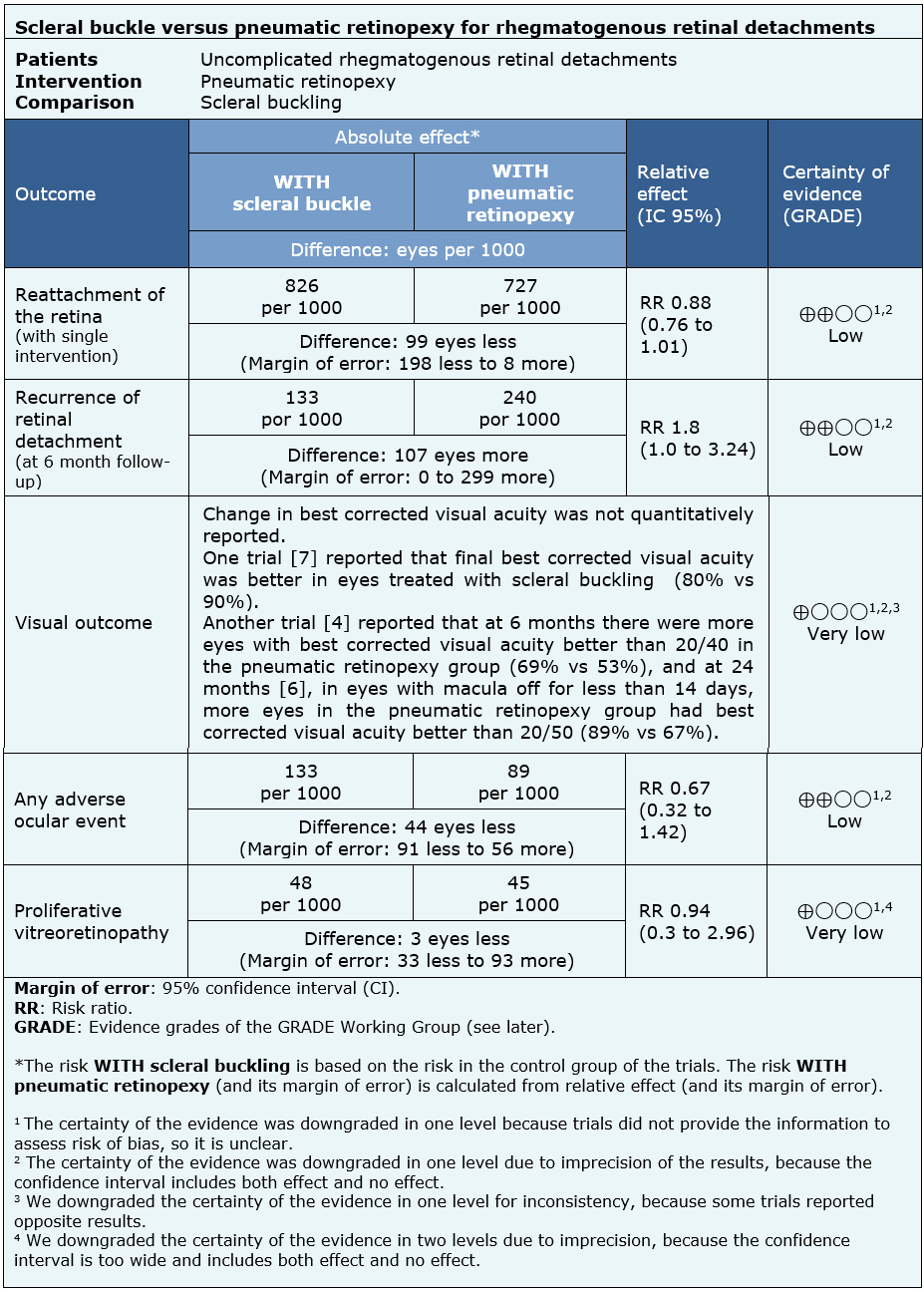 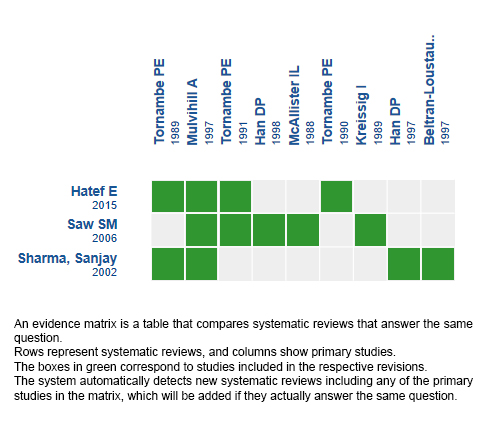 Kreissig I, Failer J, Lincoff H, Ferrari F. Results of a temporary balloon buckle in the treatment of 500 retinal detachments and a comparison with pneumatic retinopexy. American Journal of Ophthalmology 1989; 107: 381–389.