INTRODUCTION
The use of video games has been proposed as an alternative to shorten the learning curve of basic laparoscopic skills. However, it is not yet clar how useful this practice is.

RESULTS AND CONCLUSIONS
We identified three systematic reviews including eight primary studies, of which four were randomized trials. We concluded video games training could help shorten the learning curve of basic laparoscopic visuospatial skills measured in a virtual platform, but the certainty of the available evidence is low.

Both reduced training time with living patients and rapid technological progress have changed surgical training in recent years. New forms of training have been implemented, such as of simulators or virtual reality exercises, especially in the field of minimally invasive surgery. The practice of video games could help acquire surgical skills, since it involves fine motor skills and familiarity with the use of 2D images to represent 3D realities. The possibility of training these skills through video games provides a new alternative for improvement. Despite the enthusiasm generated by these new tools, the evidence supporting its actual efficacy is a matter of debate.

The information on the effect of video games as training for basic laparoscopic surgical skills is based on four randomized trials involving 99 surgeons or students [4],[5],[6],[7].

All trials reported laparoscopic skills, but none of the reviews presented data that could be re-analyzed or pooled in a meta-analysis, so the conclusions are presented as they were reported by the systematic reviews identified. 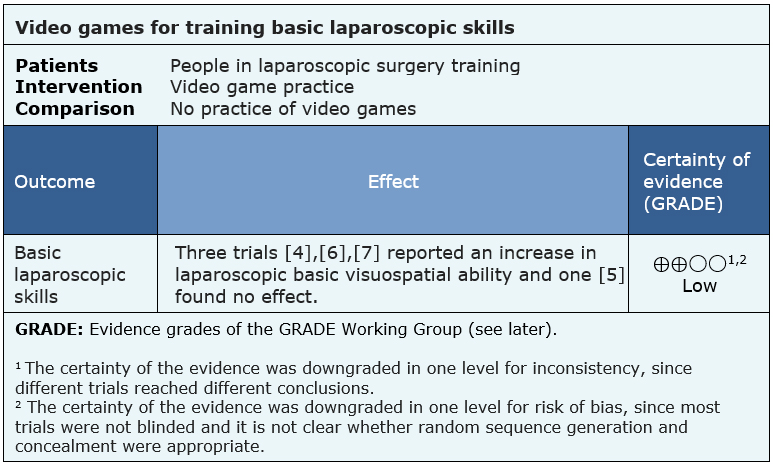 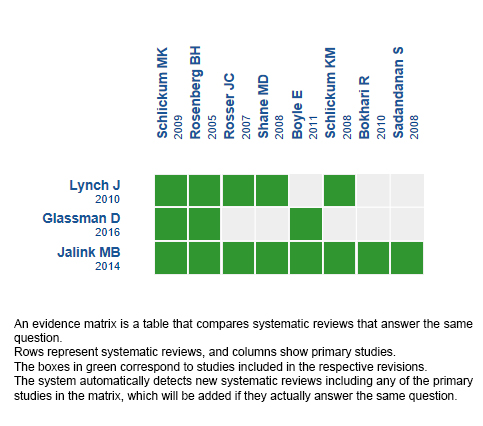 Follow the link to access the interactive version: Video games as a method of training basic laparoscopic skills.