Introduction
Uterine fibroids are frequently encountered in gynecology and are a therapeutic challenge. New therapies, such as ulipristal acetate, could help with symptomatic relief, improve quality of life, and decrease uterine fibroid size. Notwithstanding, there is controversy about adverse effects, especially for hepatotoxicity.

Methods
We searched in Epistemonikos, the largest database of systematic reviews in health, which is maintained by screening multiple information sources, including MEDLINE, EMBASE, Cochrane, among others. We extracted data from the systematic reviews, reanalyzed data of primary studies, conducted a meta-analysis, and generated a summary of findings table using the GRADE approach.

Results and conclusions
We identified nine systematic reviews and included ten studies overall, of which five were randomized trials. We conclude that ulipristal increases the likelihood of amenorrhea, improves the quality of life, and decreases menstrual bleeding. However, there is also a likely increase in the risk of adverse effects. Furthermore, ulipristal could decrease the size of fibroids.

Uterine fibroids have an incidence of 40% in women older than 35 years [1]. They are symptomatic less than 30% of the time, including dysmenorrhea and abnormal uterine bleeding, among the most frequent [2].

Most of the time, these symptoms respond well to medical treatments such as non-steroidal anti-inflammatory drugs or contraceptives. The remaining percentage will eventually require surgery, ranging from myomectomy to hysterectomy. Uterine fibroids account for 60% of major gynecological surgeries [3] and cost between 1,400 and 2,300 USD. When seeking to preserve the patient’s fertility, a myomectomy can be performed, a surgery that generally has high bleeding rates and requires adequate training by the surgeon. Since this technique was described, various preoperative strategies have been tried to reduce bleeding.

Among the different medical alternatives available, ulipristal acetate has been used to reduce bleeding and eventually facilitates surgery [4]. Despite this benefit, there is controversy about its use because adverse events have been described.

We searched in Epistemonikos, the largest database of systematic reviews in health, which is maintained by screening multiple information sources, including MEDLINE, EMBASE, Cochrane, among others, to identify systematic reviews and their included primary studies. We extracted data from the identified reviews and reanalyzed data from primary studies included in those reviews. With this information, we generated a structured summary denominated FRISBEE (Friendly Summary of Body of Evidence using Epistemonikos) using a pre-established format, which includes key messages, a summary of the body of evidence (presented as an evidence matrix in Epistemonikos), a meta-analysis of the total of studies when it is possible, a summary of findings table following the GRADE approach, and a table of other considerations for decision-making.

In relation to the body of evidence to answer these questions

What is the evidence

Information on the effects of ulipristal acetate on uterine fibroids is based on four randomized trials [12],[13],[15],[16], which included 873 patients.

None of the systematic reviews reported pregnancy rates and hepatotoxicity outcomes.

The summary of results is as follows: 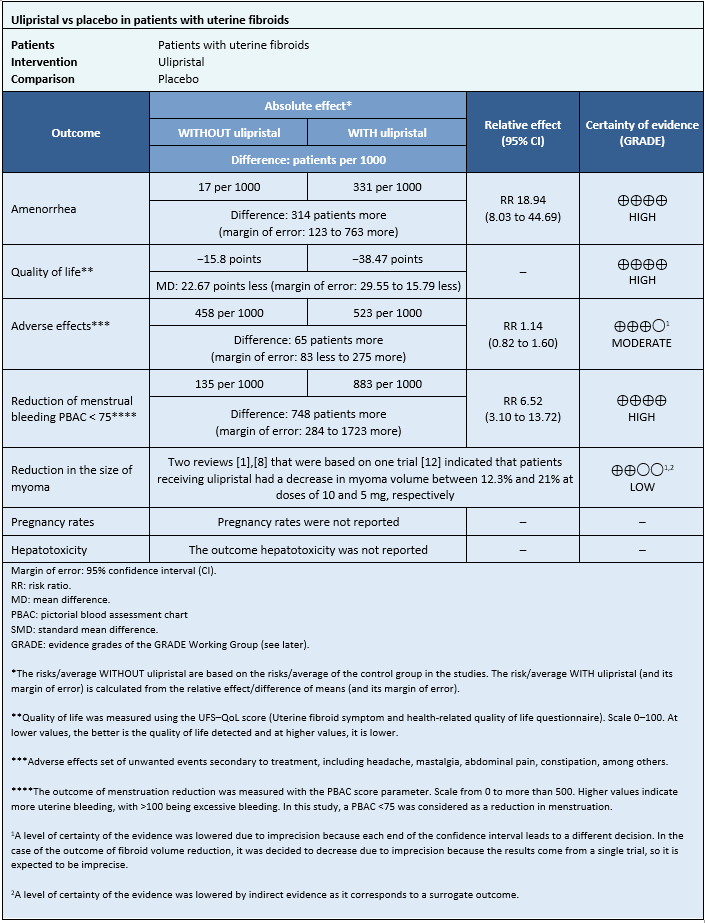 Using automated and collaborative means, we compiled all the relevant evidence for the question of interest and present it as a matrix of evidence. 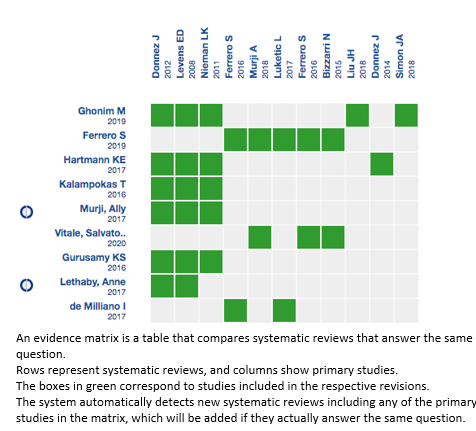 After creating an account in Epistemonikos, users will be able to save the matrixes and to receive automated notifications any time the new evidence potentially relevant for the question appears.

This article is part of the Epistemonikos Evidence Synthesis project. It is elaborated with a pre-established methodology, following rigorous methodological standards and an internal peer review process. Each of these articles corresponds to a summary, denominated Friendly Summary of Body of Evidence using Epistemonikos (FRISBEE), whose main objective is to synthesize the body of evidence for a specific question, with a friendly format to clinical professionals. Its main resources are based on the evidence matrix of Epistemonikos and analysis of results using GRADE methodology. Further details of the methods for developing this FRISBEE are described (http://dx.doi.org/10.5867/medwave.2014.06.5997)

Epistemonikos foundation is a not-for-profit organization aiming to bring information closer to health decision-makers with technology. Its main development is the Epistemonikos database.

Ethics
This study was not presented to the ethics committee because the source of information for this review was secondary, and the articles were public.

Sangam Jha. Ulipristal acetate in the management of fibroid uterus.

Analysis
Characteristics of the coronavirus disease 2019: A review of emerging literature