Septic thrombophlebitis of the portal and superior mesenteric veins is a rare complication from an infectious gastrointestinal or intra-abdominal process [1]. Generally, the most common symptoms are fever and abdominal pain; thus, their low specificity can cause a late diagnosis. Hepatomegaly, jaundice, leukocytosis and abnormal liver function tests can also be found [2].

The most frequent causes which it has been associated with are diverticulitis, appendicitis and cholangitis. Also, although in a lesser extent, it could be associated with intestinal inflammatory illness and pancreatitis [1]. However, in some cases no specific etiology can be determined. Likewise, a hypercoagulability state has been found to be related to the illness development [2].

First treatment approach for pylephlebitis must be antibiotic therapy, to which anticoagulants can be added as a preventive measure for the thrombus spreading [2].

We present the case of a 50-year-old male patient, born in Cajamarca, Peru. He reported abdominal pain, fever, diarrhea and jaundice three weeks before his admission to the emergency department. The abdominal pain was described as colicky of moderate-to-severe intensity (8/10), diffused location and it did not disappear when taking conventional painkillers. The patient also claimed to sense a non-quantified temperature rise at nights. Additionally, he had loose stools without mucus nor blood, or pushings, or tenesmus, with a frequency of three times a day associated with shivers, profuse sweating and malaise.

At physical examination, the patient was found in an apparent general regular state, with axillary temperatures of 40°C, paleness and slight jaundice. The abdomen was found distended and painful on deep palpation. On the right hypochondrium, the liver edge was found 5 cm under the rib.

During hospitalization, the fever fluctuated between 38° and 40°C, with the signs and symptoms described when admitted. An abdominal ultrasonography revealed a 169 mm liver span, with regular borders, parenchyma with little echogenicity changes, 4 mm common bile duct and absence of intrahepatic bile ducts dilatation. The other results were not pathologic.

Subsequently, intravenous treatment was started: metamizole (1 g) was administrated on the first day of hospitalization conditioned upon fever, and antibiotic therapy with vancomycin 1 g every 12 hours, imipenem 500 mg every six hours and doxycycline (100 mg orally) every 12 hours for 14 days. These antibiotics were suspended due to the lack of clinic response and the patient continued with fever and diarrhea.

On the 14th day of hospitalization, the abdominal multi-slice helical computerized tomography result was obtained, and the definitive diagnosis of superior mesenteric and portal venous thrombosis was established (Figure 1). We decided to start treatment with intravenous metronidazole 750 mg three times a day for 21 days. At the third day, the fever broke and it was added anticoagulant treatment with subcutaneous enoxaparin 60 mg every twice a day for a week and warfarin (60 mg orally) once a day for three months.

The patient was discharged asymptomatic. During the three-month follow-up period, the patient remained in good clinic condition.

Of all reported cases about pylephlebitis, 11% to 32% are a serious complication of an infectious focus in the drainage area through the portal system or a complication of hypercoagulability state. This is due to an alteration of the coagulation factors or to a neoplastic process [3]. Inflammatory processes, associated most of the time, are diverticulitis, appendicitis and cholangitis. Besides, the gram-negative bacteria, above all Bacteroides fragilis and Escherichia coli, are commonly implicated in the process, although it can be associated with Klebsiella pneumoniae, Proteus mirabilis and Enterobacter spp as well [4]. However, not in all cases of pylephlebitis an etiological agent is found as direct cause. This is what happened to the present case, in which the patient did not show any pathology and nor could we find the microbiological agent related to the intestinal infection [5].

The most common symptoms are fever and abdominal pain, which can be diffused or located on the right hypochondrium; sometimes there will also be nauseas and vomit [6],[7]. Physical examination may show hepatomegaly and jaundice. Both symptoms are not frequent but they may appear in advanced forms with multiple liver abscesses or serious liver damage [4]. In most cases the low specificity of the symptoms and signs, make it difficult to establish the clinic suspicion.  Not considering pylephlebitis among the options leads to a late diagnosis [8],[9],[10].

The key to diagnosis is the demonstration of portal vein thrombosis, in a patient with suggestive clinic, that is, a patient with high fever with no apparent focus, and abdominal pain [11]. Besides, the presence of leukocytes and alterations in liver function tests (high level of alkaline phosphatase and gamma glutamyl transpeptidase) should suggest such possibility [2],[3].

In the last 15 years, the late diagnosis of this pathology has been associated with a high mortality rate [1]. Computer-aided diagnosis is one of the most sensitive techniques and allows a good evaluation of the liver parenchyma and of the abdominal vascularization [2]. In the case of this patient, pylephlebitis could be identified by multislice computed tomography (Figure 1).

The most accepted treatment consists in therapy with broad-spectrum antibiotics, covering aerobic and anaerobic bacteria, for 4 to 6 weeks, due to the risk of liver abscess formation. Additionally, anticoagulant treatment has not been considered in most cases, unless hypercoagulability is the basic pathology [12],[13],[14]. However in the case presented, this fact did not prevent the patient from responding to antibiotic and anticoagulation treatments he had received. Anticoagulant treatment was established with the goal of preventing the extension of the thrombus and its possible complications because it has been demonstrated that its use might prevent intestinal ischemia [11].

Until a few years ago, most pylephlebitis cases were associated with appendicitis. However, the number of pylephlebitis cases due to appendicitis reduced significantly with the introduction of antibiotics [12],[13]. Nowadays, one of the most frequent described focus is diverticulitis, followed by other inflammatory processes where, in some cases including this report, the microbiological cause for the infectious focus has not been found [3].

Pylephlebitis continues to be one of the most serious complications of both inflammatory and infectious processes. Therefore, timely diagnosis is essential to give an adequate treatment with broad-spectrum antibiotic and anticoagulation therapies in a preventive way. It has been demonstrated that computed tomography is the image technique of choice. Moreover, signs of sepsis without apparent cause should support the diagnosis of pylephlebitis. Finally, it is important to review and appraise similar literature, regarding this case, to keep perception of this illness up-to-date.

The readers may request more images by directly contacting the responsible author.

Ethical aspects
The Journal has evidence of ethical aspects being respected regarding information management and procedures performed, since the authors submitted a copy of the patient´s consent form for the publication of his case.

Conflicts of interests
The authors have completed the conflict of interests declaration form from the ICMJE, translated into Spanish by Medwave. They declare not having received funds for conducting this study, nor having any conflict of interests with the matter dealt herein. Forms can be requested to the responsible author or the editorial direction of the Journal. 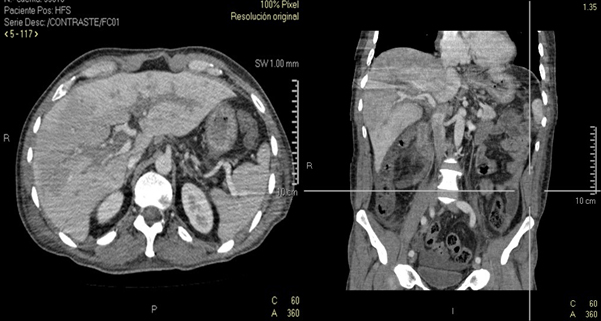