The aetiology of chest pain is vast and can include causes ranging from those that are cardiac such as acute myocardial infarction or pericarditis to those that are extra-cardiac, e.g. pulmonary embolism, costochondritis. Less commonly, chest pain may present as an indicator of intra-abdominal pathology, e.g. perforated peptic ulcer or pancreatitis [1]. After exclusion of common and less common causes of chest pain, acute gastrothorax should be considered within a differential diagnosis. Acute gastrothorax is post-traumatic in up to 15% of cases but can rarely occur due to diaphragmatic defects [2]. This can occur within adults and the paediatric population, which is often secondary to congenital diaphragmatic hernias within the latter group.

We present a case of an acute gastrothorax masquerading with a presenting complaint of chest pain and atypical radiological findings with near-fatal consequences.

A 71-year-old woman presented to the emergency department with a one-hour history of left-sided non-radiating chest pain. She was on oral anti-hypertensives: amlodipine and bendrofluazide but otherwise previously fit and well and was never a smoker. She was haemodynamically stable on arrival to the emergency department and systemic examination was unremarkable. Her electrocardiogram did not reveal any ischaemic changes. She was assessed for an acute coronary syndrome and her troponin was normal. Her chest X-ray revealed evidence of a markedly raised left hemi-diaphragm (Figure 1a).

Subsequently, two hours later she suddenly became acutely breathless and had a cardio-respiratory compromise with pulseless electrical activity cardiac arrest; thereafter three cycles of cardiopulmonary resuscitation for a non-shockable rhythm with return of spontaneous circulation. The patient was alert, conscious and had a patent airway with spontaneous but laboured breathing and adequate peripheral circulation. 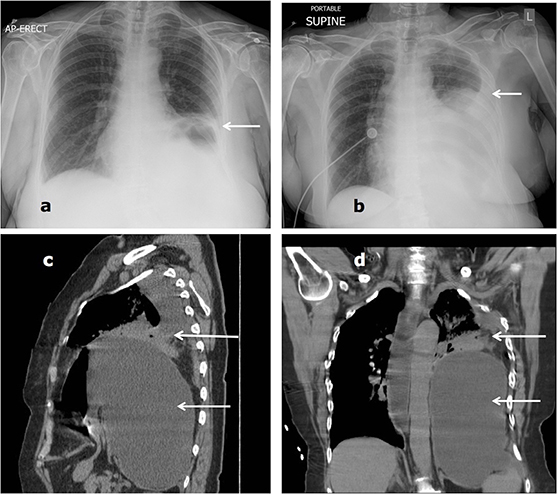 An urgent nasogastric tube was inserted to prevent further lethal cardiorespiratory compromise. A repeat chest X-ray for positioning revealed worsening of the left hemi-thoracic opacity showing pan-hemi-thoracic opacification (Figure 2a). The nasogastric tube drained two and half litres of dark-brown aspirate with an acidic pH. Central-venous-access was secured and the patient successfully underwent an emergency laparoscopic herniorrhaphy of the incarcerated diaphragmatic hernia (Figure 3). Post-operative radiological findings on the intensive care unit (ICU) show resolution of the left hemi-thoracic defect (Figure 2b). 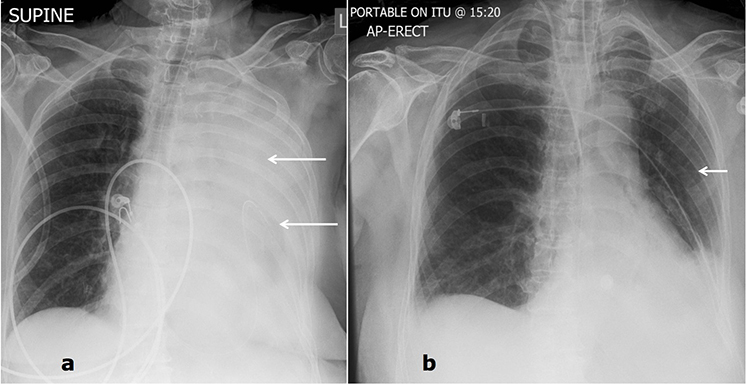 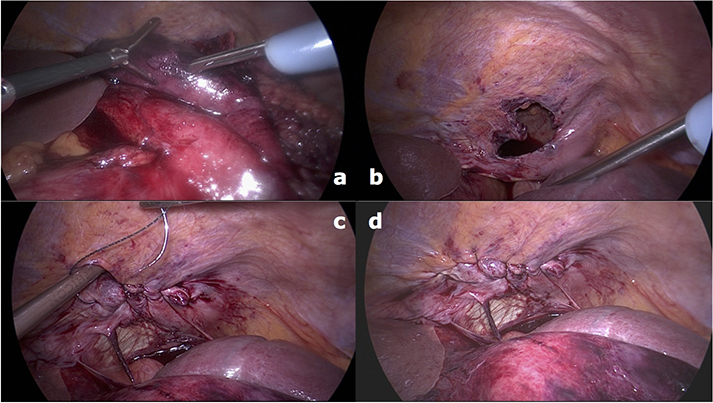 The patient recovered well from the procedure with no complications and was discharged home within a fortnight after initial presentation. The patient remained stable when she was reviewed in the outpatient clinic 12 months later.

The aetiology of this patient’s gastrothorax is likely to be a diaphragmatic hernia. Diaphragmatic hernias may be congenital or acquired. The former option often presents in infancy with cardio-respiratory distress [3], which is sometimes associated with other abnormalities and genetic polymorphisms [4]. However, this patient is likely to have had an acquired diaphragmatic hernia. Many cases often follow blunt or penetrating trauma, including surgery, but with those cases that were non-traumatic are termed ‘spontaneous’. These often are causes by episodes involving raised intra-abdominal pressure including the Valsalva manoeuvre such as coughing, vomiting or even childbirth [5],[6].

We present a case of non-traumatic acute gastrothorax, which is one of few cases that presented with chest pain [7]. In contrast the case presented by Solé and colleagues (2013) demonstrated a similar clinical presentation of suspected acute coronary syndrome (ACS) but with widespread ST depression on electrocardiogram. Despite this, there was no hemi-thoracic neo-opacity on the chest radiograph as suggested by this study. Of the remaining cases of spontaneous gastrothoraces, both patients presented to the emergency department with respiratory distress and had known diaphragmatic hernias as suggested by previous history of hiatus hernia [8],[9]. The patient presented in our case notably did have a hiatus hernia. Both cases required decompression via endoscopy or a nasogastric tube and undefined corrective surgery [8],[9]. Traumatic gastrothorax was caused by vehicle collision by two cases [2],[10] and by playing party games 18 days prior to presentation [11]. Other traumatic cases implicated resuscitation [12] and esophagectomy and metastatic tumour recurrence [13] as causes of gastrothoraces.

An acute gastrothorax is a clinically rare but life-threatening condition often excluded in a differential diagnosis in the context of a patient presenting with chest pain. The clinical examination findings along with the cardiac arrest may allow the consideration of a tension pneumothorax as a possible diagnosis. Treatment of a tension pneumothorax at the bedside via needle decompression may result in disastrous consequences such as gastric perforation and acute lung injury [10]. Within the literature there are a number of clinical presentations of gastrothorax including breathlessness [12],[13],[14], lower back pain [13], cough [13], nausea [7] with investigative findings such as ischaemic electrocardiogram changes [7],[12].

Our case is unique in presentation as it is the second case to describe an acute presentation of a gastrothorax with chest pain [7]. Despite this, we describe a unique radiological finding of complete left hemi-thoracic radio-opacity which contrasts the vast majority of existing cases within the literature which describe radiolucent gastric bubbles within the left hemi-thorax [9],[11],[13],[14],[15].

Whilst clinical presentations may differ there is an overlying consensus that a gastrothorax requires urgent decompression via an nasogastric tube [7],[9],[11],[12],[13] at first presentation. An algorithm, which albeit is tailored for the paediatric population [16] suggests that further treatment should involve transthoracic needle decompression of the stomach if decompression is unsuccessful, with a view to surgery to correct the diaphragmatic defect [16]. Alternatives to the herniorrhaphy to the diaphragm with reduction of the diaphragmatic hernia include an open approach as compared to the laparoscopic approach that is likely to result in larger scar formation, prolonged post-operative pain and recovery [17]. Whilst there is a paucity of data specifically comparing techniques of surgical reduction of a gastrothorax, some data around the inguinal hernia repair suggest that laparoscopic technique carry a risk of intra-operative visceral injury, such as stomach and pericardium in this case [17]. Mesh repair, i.e. hernioplasty could potentially risk infection in an area in the thorax or abdomen but there is a lack of data to substantiate this extrapolation from inguinal studies [17].

Acute gastrothorax should be considered in all patients presenting with acute-onset left-sided chest pain especially with an unremarkable medical history and normal initial investigations. History taking should explore risk factors for a gastrothorax including recent activities increasing intra-abdominal pressure, traumatic injury, or known diaphragmatic or hiatus hernia. Furthermore, chest radiographic findings of a unilateral hemi-thoracic opacity may indeed represent fluid within the thorax, which may lie within the stomach as opposed to the pleural cavity. After initial stabilisation, urgent surgical intervention is required to reduce radiologically-confirmed acute tension gastrothorax causing mediastinal shift.

From the editor
This article was originally submitted in Spanish and English by the authors. The Journal has not copyedited the English version.

Ethical aspects
Informed consent requested by Medwave, was signed by the patient. A copy of this document was sent to the editorship of the Journal.

Conflicts of interests
The authors completed the ICMJE conflict of interest declaration form. They declare not having received funding for the preparation of this report, not having any financial relationships with organizations that could have interests in the published article in the last three years and not having other relations or activities that might influence the article´s content. Forms can be requested to the responsible author or the editorial direction of the Journal.

Funding
The authors declare that no external funding sources.