Objetive To describe the characteristics of the scientific production of midwives in Latin American obstetrics and gynecology journals indexed to Scopus during the period 2011 to 2016.

Methods This paper reports a descriptive bibliometric study, with intentional non-probabilistic sampling. We analyzed articles of research papers published by midwives in medical specialty journals in obstetrics and gynecology of Latin America indexed to Scopus, in the 2011 to 2016 period.

Results We found eight obstetrics and gynecology journals in Latin America indexed in Scopus. There were 1,696 articles published between 2011 and 2016, of which 4.9% were authored or co-authored by midwives. Of these publications, 93.8% were related to topics of the specialty, 62.5% had midwives as corresponding authors, 64.1% of papers were in Spanish, only 3.1% were published in English, and 57.8% of midwives worked in Chile at the time of publication. In 2016, there was one-fifth the number of publications compared to 2012.

The English version of this article is in the process of being published.

Midwifery is a health profession in the field of obstetrics and gynecology (maternal and child care and reproductive health services) that focuses on disease prevention, health promotion, recovery, and rehabilitation before, during, and after pregnancy in health care practice as well as administrative services, teaching, and research[1]. Scientific research related to this medical specialty should include a variety of approaches to generate knowledge about prevalence and incidence, risk factors, and consequences of diseases that occur in mothers and newborns and to support the goals of universal health coverage and care[2]. The results of this research should be disseminated in scientific articles published in indexed journals, given their quality, impact, and recognition within the scientific community, to share new knowledge that will improve the practice and quality of care of midwives, supported by reliable scientific evidence.

A descriptive bibliometric study was carried out, using intentional/non-probabilistic sampling. A search of scientific articles was carried out in Latin American medical specialty journals covering obstetrics and gynecology and indexed in Scopus that included midwives as any type of author (principal investigator, coauthor, correspondent). The Scopus database is

the largest one at the international level, with rigorous selection criteria for its journals, based on specific editorial policies; citation of its published articles; and impact[5]. It includes more than 21 500 journals covering different areas of knowledge, including more than 12 775 journals with medical content[6].

The search consisted of two phases: first, the Scimago Journal & Country Rank was used to find obstetrics and gynecology journals indexed in Scopus. As no journals specifically focused on obstetrics were found in Latin America, medical specialty journals published in the region that covered obstetrics and gynecology were identified and searched. Thematic areas included women's health, public health, gender, and violence. The second stage of the search identified articles in each of the medical specialty journals in which at least one of the authors was identified as a midwife. The search was carried out by two members of the research team who also compared the data found and resolved any discrepancies between them. The final search results were reviewed by all four members of the research team. The study period was 2011 to 2016 (six years).

The descriptive statistical evaluation was carried out with the intention of analyzing the following data: country where the midwife worked at the time of publication (Brazil, Chile, or Peru); type of authorship (principal investigator, correspondent, or coauthor), year of publication (2011, 2012, 2013, 2014, 2015, or 2016); type of article (original research, review, special report, or clinical case report); language of main text (English, Portuguese, or Spanish); and specific subject matter of the article (obstetrics and gynecology specialty, and other). Academic status and affiliation with any specific research team was not analyzed because some articles in the final study sample did not provide this information.

Prior to its execution this research was reviewed and approved by the Institutional Research Ethics Committee of the Universidad Católica Los Ángeles de Chimbote (CIEI-ULADECH-Católica) (authorization report # 014-2018-CEI-VI-ULADECH-Católica).

We found eight Latin American medical specialty magazines in obstetrics and gynecology indexed in Scopus, and 1 696 articles published between 2011 and 2016. Only 4.9% of the total scientific production included midwives as any type of author. Of this subtotal, 93.8% covered topics related to midwifery, 62.5% had midwives as correspondent authors, 64.1% were published in Spanish, and only 3.1% were published in English (despite the fact that 50%4 of the journals included in the sample accepted English manuscripts). Other findings included 1) 57.8% of the midwife authors were working in Chile at the time of publication, and 2) in 2016 there were five times fewer publications with authors identified as midwives than in 2012. The year 2012 had the highest number of articles with midwife authors during the study period (Table 1).

Scientific production of midwives in Latin American medical specialty journals covering obstetrics and gynecology and indexed in Scopus in the last six years is generally deficient. In our research, two of every three articles published by midwives were in Spanish.

Based on the results of our study, scientific articles published by midwives in medical specialty journals covering obstetrics and gynecology and indexed in Scopus was minimal (4.9%), less than the proportion of articles published by nurses found in other studies (11.8%)[7]. This result may be due to the fact that of the total number of Latin American countries (26), only seven (Argentina, Chile, Ecuador, Paraguay, Peru, Puerto Rico, and Uruguay) consider midwifery to be a profession, with other countries in the region (e.g., Colombia, Cuba, the Dominican Republic, and Venezuela) making no clear differentiation between this medical specialty and nursing[1],[8].

In addition, midwives appear to be somewhat marginalized in scientific research, with their participation often limited to research assistant jobs or field work. This may be due to scarce opportunities for principal investigators in this medical specialty or a limited knowledge base for midwifery research[9].

The amount of scientific production by midwives in Latin America does not appear to be increasing consistently over time. While all research generates new knowledge it only acquires real value when it is disseminated to the scientific community in scientific publications9. According to our results, the number of scientific publications by midwives published annually has not been constant over time. Factors contributing to this variance may be related to midwives’ lack of time for research, due to the demands of their job, scarce sources of funding, and limited training programs and scholarships, as well as difficulties in producing scientific texts in Spanish and/or English[3].

In this research, most articles by midwives were published in Spanish. Although at present the main language of scientific production is English, Spanish is the official language of Latin American countries. Midwives’ role as a vehicle of scientific communication may be limited due to their language of origin, reducing the visibility of their scientific contributions at the international level[10].

In summary, there is a need to employ strategies that encourage and allow research and scientific production by midwives so that, through scientific research, new and better approaches to provide better health care for mothers and their newborns can emerge.

The main strength of this study is that to the best of the authors’ knowledge this research is the first to explore scientific production carried out by midwives in Latin American medical specialty journals covering obstetrics and gynecology.

One possible limitation was the exclusion of non-Latin American medical specialty journals, where some midwives may choose to publish due to the greater impact they have internationally versus Latin American journals. Another limitation was restricting the search to the Scopus database and therefore not counting articles published by Latin American midwives indexed in other databases (e.g., SciELO, LILACS or Redalyc) or those in non-indexed journals. However, due to the

superior editorial quality of Scopus content the use of that database as the sole search source was considered sufficient for the purpose of this study. Finally, the search only included specialized medical journals, excluding content from thematic journals (those covering general health and public health among others) as well as conference proceedings, undergraduate thesis papers, articles in journals that are not indexed, and gray literature, and thus potentially skewing the results.

Between 2011 and 2016, scientific production of midwives in Latin America medical journals covering obstetrics and gynecology and indexed in Scopus is, in general, deficient. Two of every three articles published by midwives was in Spanish.

Strategies to increase research and scientific production by midwives are needed so that new, evidence-based knowledge and practices to help improve maternal and child health can emerge.

Authorship contributions
EZL, JC, DVZ, and JBP: participated in the conception of the idea of the study. All authors participated in data collection, interpretation of results, drafting of the manuscript, and approval of the final version.

Competing interests
The authors declare no conflicts of interest with respect to this article.

From the editors
The original article was submitted in Spanish. This is the translated version of the article as provided by the authors, and has not been copyedited by the Journal. 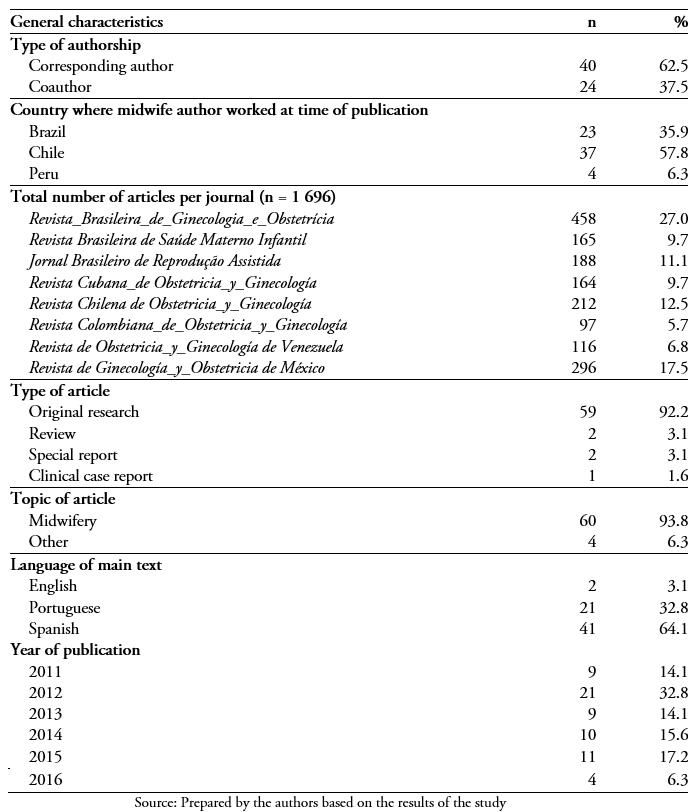