OBJECTIVES To determine the actual nutritional intake of very low birth weight infants and their growth outcome during the first month of life. Additionally, we identified factors that account for a negative neonatal outcome in this population.

METHODS A case-series study was conducted in a tertiary hospital in Lima, Peru between 2011 and 2012 and the data was obtained from medical records. No feeding protocol was used during this study. Daily fluids, energy and protein intakes were documented and weekly weight z-scores were calculated. A logistic regression analysis was used to identify factors for an adverse outcome, defined as neonatal mortality or extra-uterine growth restriction, during the first 28 days of life.

RESULTS After applying selection criteria, 76 participants were included. The nutritional intakes were similar to standard values seen in the literature, but protein intakes were suboptimal in all of the four weeks. Birth weight z-score was associated with an adverse outcome (p=0.035). It was determined that having a birth weight z-score under -1.09 predicted a negative outcome with an area under the curve of 96.8% [93.5%, 100%] with a 95% confidence interval.

CONCLUSION Protein intakes are widely deficient in the population of this study. Nevertheless, an adverse outcome during the neonatal period is more associated with a poor birth weight z-score than nutrition-related factors.

Adequate nutrition is essential for optimum growth in very low birth weight infants. Despite recent research in this area, extra-uterine growth restriction presents an ongoing challenge [1] due to immature gut motility and the subsequent risk of necrotizing enterocolitis with “aggressive” feeding [2]. Inadequate nutrition leads to poor growth [3],[4] in the short term and impaired neurological development [5],[6] in the long term. Studies have also shown that very low birth weight infants are likely to develop hypertension, insulin resistance and diminished glucose tolerance by adulthood [7] and may never reach adult growth as compared with their non-very low birth weight peers [8].

In contrast, adequate nutrition has been associated with lower rates of death and short-term morbidity, without increasing the incidence of necrotizing enterocolitis [9]. The Cochrane Collaboration found that the risk of necrotizing enterocolitis in very low birth weight infants is not affected by delaying the introduction of progressive enteral feeds, nor by delaying advancement of feeds or the use of early trophic feedings [10],[11],[12]. As to long term complications, it has been recently proposed that nutrition acts as a protective factor via the microbiome-gut-brain axis, which may explain why suboptimal nutrition may affect neurodevelopment negatively [13].

Very low birth weight nutrition management is being practiced heterogeneously at distinct neonatal intensive care units [14]. Several reports have been made regarding nutritional intakes and growth outcome, [3],[4],[15],[16],[17],[18],[19] but more evidence is needed to come to any management conclusions [19]. Thus, we will try to explore this area, by describing and evaluating the current nutritional management, and its associated growth outcomes, in a resource-limited setting.

Ethics statement
Ethical approval for this protocol was obtained from the ethics committee at Universidad Peruana Cayetano Heredia in Lima, Peru.

Design
This is a retrospective cohort done in the neonatal intensive care unit of Hospital Nacional Cayetano Heredia in Lima, Peru. No standardized nutrition protocol for very low birth weight infants had been implemented at the time of the study. Inclusion criteria: Infants born during the years 2011 and 2012 with a birth weight of 1500 grams or less. Exclusion criteria: Length of stay in the hospital less than seven days; lack of weight information on the days 7, 14, 21 or 28 (+/-1 day) and participants without available medical records.

Study variables
In January 2013 medical records for participants meeting selection criteria were reviewed. For those who met the criteria we reviewed hospital course and measurements data including sex, gestational age, weight, enteral feedings, fluids, energy and proteins for the first 28 days or until discharge. The nutrient content of maternal milk was assumed to have 0.9 g / 100ml and 67 kcal / 100ml, which is consistent with literature values [20]. The formula used for premature babies contained 24 cal/oz.

Comorbidities were tabulated for necrotizing enterocolitis, sepsis and mechanical ventilation. Necrotizing enterocolitis was defined as a Bell stage of 2 or above with clinical and radiological findings [22]. A sepsis diagnosis was made clinically but confirmed microbiologically, to be included in the analysis. Mechanical ventilation is considered if the patient required assisted breathing.

R version 3.0.2 was used for statistical analysis. Graphics were created using the package of ggplot2 for R as well as the pROC package. Box plot graphs were created to visually evaluate nutritional intakes and weight z-scores during the first 28 days of life. One box plot was graphed per week.

A multivariable logistic model was used to evaluate our final outcome (mortality or extra-uterine growth restriction). The variables in the model included: birth weight z-score, protein and calories in the first week of life, the day enteral feeds started, and the presence of necrotizing enterocolitis, sepsis and mechanical ventilation. Nutritional intakes in the other weeks of life did not affect the outcome, thus were not included in the model. A significance level less than 0.05 was used in our statistical tests.

We used our models to predict, within a 95% confidence interval (CI), and to evaluate the area under the curve. Youden Index, sensitivity and specificity were calculated using the package Optimal Cutpoints version 1.1-3 in R.

We had 115 very low birth weight infants born in 2011 and 2012 with an incidence of 10.9 and 15.2 per every 1,000 births, respectively. From this total, 39 were excluded: 28 due to hospital length of stay less than 1 week, 2 for lacking weight information and 9 because of unavailable medical records. Thus, 76 participants were included in this study. It should be mentioned that 75% of participants with less than a week of stay were extremely low birth weight.

All infants started their feeding with parenteral nutrition, while enteral nutrition began in the first couple of days. Parenteral nutrition was given until the infant received 100 ml/kg/day enterally. Concerning nutritional intakes, daily fluids, energy and protein of the first week of life can be seen in (Table 1) and weekly averages are shown in (Figure 1.) Proteins (p=0.18) and calories (p=0.46) intake in the first week of life were not significant in relation to an adverse outcome, as defined earlier. Protein intakes during this study were always below 3.5 g/kg/day. Regarding enteral feedings, these started with a median of 2 days (range: 1 to 12 days) and achieved 100% by a median of 11 days (range: 5 to 28 days). However, 23.7% of participants regressed after achieving full enteral nutrition. 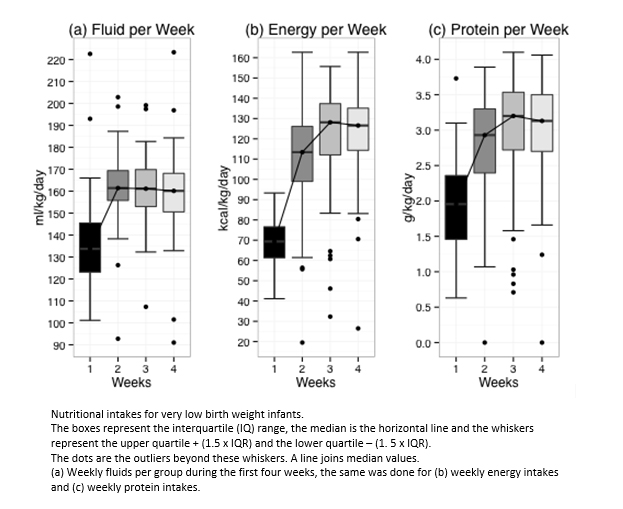 In relation to the weight z-scores, their medians were always negative, starting with a birth weight z-score of -1.43 (range: -4.41 to 1.00) and reaching minimum of -2.48 (range: -4.66 to -0.98) at 28 days of life, as shown in (Figure 2). Birth weight z-score was the factor most strongly associated with neonatal death or extra-uterine growth restriction (p=0.035) during their first 28 days of life. This was the only variable that showed statistical significance in our analysis (Table 2). 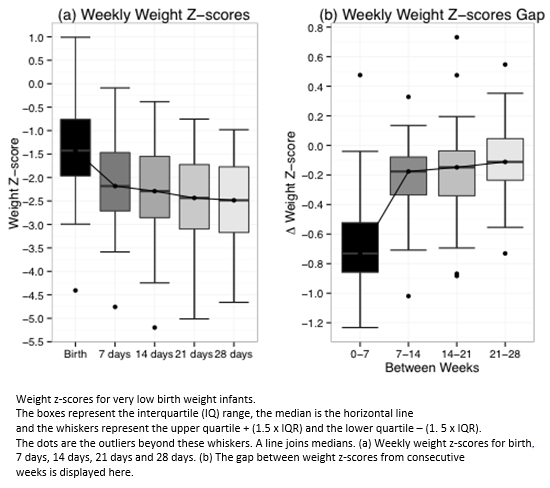 Table 2: Logistic multivariable regression for a negative outcome at 28 days

Multivariable logistic regression analysis demonstrates that the probability of a negative outcome dramatically increases as a birth weight z-score falls below -1.09 (Figure 3). When evaluating birth weight z-score alone and outcome. As mentioned before, a negative outcome is considered as death or extra-uterine growth restriction in the first 28 days of life. Its appropriate receiver operating characteristic (ROC), we find an area under the curve of 96.8% [93.5%, 100%]. This provides a sensitivity of 96% [79.64%, 99.99%] and specificity of 90% [78.59%, 96.74%] with -1.09 as the cutoff, with a Youden Index of 0.862 (Figure 4). 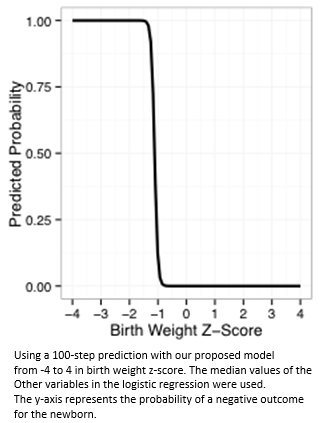 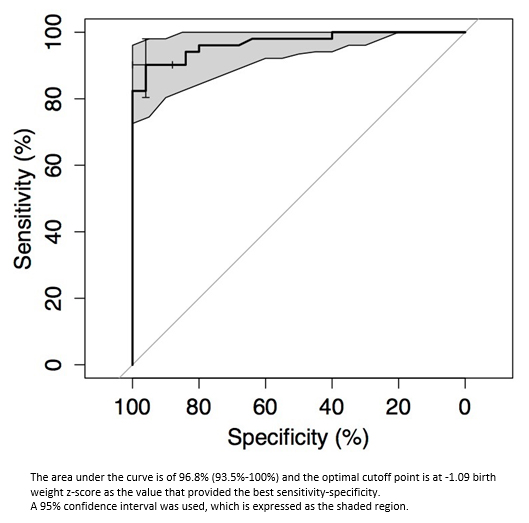 When comparing our nutritional intakes with the literature [23],[24],[25],[26],[27] fluids and energy intakes almost met the established values, however protein intakes were suboptimal in all four weeks. Despite having no feeding regimen and subpar protein intakes. However, nutritional intakes were not as important as birth weight z-score for predicting a negative outcome (death or extra-uterine growth restriction). Moreover, the sensitivity and specificity obtained show that having a z-score below -1.09 at birth is a good predictor for neonatal death or extra-uterine growth restriction during their first month.

Some limitations of this study include that data was obtained retrospectively, and this study was not able to obtain information regarding crown-heel length or head circumference. This study focuses on the neonatal outcomes during their first 28 days of life, however some outcomes from this early period are not seen until later in life. In contrast, this study benefits from the availability of having daily nutritional intake information for every participant. Another important strength is the fact that no feeding protocol was established, at the time of the study, thus the study group reflects a “naïve” population. Additionally, as it has already been stated, this publication represents the first report regarding nutritional intakes in very low birth weight infants from Peru.

Regarding nutritional intakes, our findings are similar to those found two decades ago in a study conducted in the USA [15] and to a study conducted a decade ago in Argentina [3]. Our data is worrisome since deficient protein intakes during the first week of life are associated with poor neurological outcomes at 18 months [6]. Furthermore, our population shows birth weight z-scores lower than those reported in other neonatal intensive care units [17],[28],[29]. In agreement with previous reports, we found that birth weight z-scores were the most important risk factor for adverse growth outcomes. Specifically, poor birth weight is the best predictor for mortality in a limited medical setting [30].

In Latin America poor prenatal control compliance, low socioeconomic status, unplanned pregnancy and subpar nutritional status have been previously associated with low birth weight [31],[32]. This is reflected with our poor birth weight z-scores which is very distinct from what has been published elsewhere [17],[28]. We hope this will help clinicians understand the clinical risk that lies on these patients. Moreover, we also hope that policymakers from low- and middle-income countries (LMIC) focus on maternal nutrition, if we ever hope to improve the negative neonatal outcome we face day to day.

Future studies should design interventions to improve birth weight with the hopes of reducing neonatal mortality and extra-uterine growth restriction. Multicenter studies should be done in low- and middle-income countries to confirm if birth weight z-score is even a better indicator for a negative outcome than birth weight per se. We found that birth weight z-score has a bigger weigh regarding an unfavorable outcome by 28 days, than nutritional intakes. Finally, we emphasize that improving maternal health and nutritional status should improve a neonate’s health status at birth and thus produce better overall outcomes.

Ethical aspects
The Journal has evidence that the research protocol which originates this article, had the approval of the Institutional Research Ethics Committee of the Universidad Peruana Cayetano Heredia, Lima, Peru.

Conflicts of interests
The authors completed the ICMJE conflict of interest declaration form and declare not having received funding for the preparation of this report, not having any financial relationships with organizations that could have interests in the published article in the last three years, and not having other relations or activities that might influence the article´s content. Forms can be requested to the responsible author or the editorial direction of the Journal.

Financing
The authors declare that the study was self-financed by the authors and no money was received from external sources.