Urinary incontinence in Chilean women: A prevalence study of the health profile and associated factors

Purpose This research seeks to determine the prevalence of urinary incontinence in adult women in La Serena, Chile, exploring its association with known risk factors.

Methods We conducted a cross-sectional, descriptive study with an analytical component. A validated questionnaire was applied to 371 women who consented, were aged 30 or older, and were users of primary health care centers.

Conclusions Given the high prevalence of urinary incontinence, its association with prevalent health problems, and its known impact on women's quality of life, the authors suggest that strategies be implemented to deal with this health problem at the primary care level.

Published evidence shows that the most relevant risk factors associated with the development or presence of urinary incontinence are age, gender, increased body mass index, and diabetes[5],[6],[9]. The obstetric history (number of births, type of birth, and weight of the child), urogynaecological history, and onset of menopause are also relevant risk factors[5],[10]. Moreover, an association between urinary incontinence and constipation has been described[11],[12]. Additional risk factors include diseases of the central nervous system (such as dementia, Parkinson's disease, stroke, multiple sclerosis), musculoskeletal diseases that result in decreased mobility and also some occupational factors[13],[14]. The relationship between type of work and urinary incontinence has been seldom explored[15],[16]. A study in South Korea found a significant association between urinary incontinence and some work environments: feeling pressured by time, uncomfortable and non-ergonomic working position for long periods, and carrying heavy loads[15]. Thus, the relationship between labor and urinary incontinence is related to the work environment and the urinary habits that women develop in this context[15],[17],[18]. For the purposes of this study, and according to Chilean legislation for female workers, hard work was defined as "work that requires many hours of standing, moving heavy objects (greater than 20 kilograms), going up and down stairs, or more than eight hours of work daily"[19].

Epidemiological studies concerning urinary incontinence have been conducted mostly in Europe and the United States, the literature being scarce in Latin America and Chile. As it is a health complication that impacts on the quality of life of those who suffer from it [6],[7],[8],[9],[10], this research aims to determine the prevalence of urinary incontinence in adult women in the commune of the city of La Serena and to assess the relationship between urinary incontinence and known risk factors.

A cross-sectional, descriptive study with an analytical component was conducted to determine the prevalence of female urinary incontinence and to explore associated factors in La Serena, a coastal city located in the mid-north zone of Chile, from October 2018 until January 2019. The participants were women over 30 years of age who used the primary health care network of the city. Exclusion criteria were defined in order to avoid confusion bias. Exclusion criteria included: being pregnant, women who gave birth in the past 6 months, and women consulting for lower urinary tract symptoms. The questionnaire used was validated in the Rincón study[9], which defines urinary incontinence as involuntary urine loss in the last month and uses the Sandvik index to determine severity[3]. The questionnaire is presented as supplementary material. Sample size was calculated by assuming a prevalence of 40%. For a total of 55 574 women over 30 using the public health system, considering 95% confidence and 5% error, a minimum of 366 surveys was calculated to be needed. The sample was taken randomly by cluster, with a proportional distribution according to each health center. Surveys were conducted, in a private environment, by well-trained fourth-year medical students after obtaining informed consent from the participants, who had consulted spontaneously by various health problems in the six urban centers that are part of the city's primary health care network. The questionnaire's time of completion varied from ten to 15 minutes. Data were recorded by each surveyor through the Survey Monkey® application on a mobile device, under the supervision of the principal researcher. Analysis to determine possible relationships was performed by calculating odds ratios with the respective chi-squared test. Subsequently, variables with a strong univariate relationship were later assessed through multivariate logistic regression analysis, adjusting by age. Pearson's chi-squared test was used to evaluate the goodness of fit of the model. The level of confidence for all tests was 95%. Data analysis and tabulation was performed in Microsoft Excel® and IBM-SPSS V26®.

The research was approved in September 2018 by Resolution N° 86 of the Scientific Ethical Committee of the Universidad Católica del Norte, Coquimbo. All participants accepted and signed the informed consent form and the ethical principles where preserved at all times. Data were analyzed blindly, utilizing a code for each participant.

A total of 371 women between 30 and 88 years old were surveyed. Fortunately, registers presented no missing data. The average age of the participants was 55.87 years. Table 1 gives details on nutritional status, type of work and gynaeco-obstetric characteristics. The range of deliveries was zero to ten children. The majority of women interviewed had at least one normal delivery and 62% of the women were post-menopausal.

Finally, Table 3 shows the results of logistic regression analysis, adjusted by age. The variables significantly associated with the presence of UI, according to the model, were hard work, constipation, type 2 diabetes mellitus and obesity.

In this investigation, the prevalence of urinary incontinence was determined to be 45%. Other national investigations have found a higher prevalence: Harwart obtained 77% prevalence on Easter Island[8], Salazar found a prevalence of 62.2% in a hospital population of Santiago[4] and Rincón obtained 77% prevalence in women from Chillán[9]. European research determined prevalence between 25% and 45%[4], which are in accord with our results. Prevalence tended to increase with the age of the women studied. However, this relation was not statistically significant, in contrast to other published experiences[2],[6],[20],[21].

The present study found significant associations of urinary incontinence with four known risk factors: hard work, obesity, diabetes, and constipation. Indeed, exposure to hard work presented a strong relationship with the existence of urinary incontinence, which corresponds with other studies[18],[22]. This relationship could be explained by the physical effort made in this type of work, which tends to increase intra-abdominal and bladder pressure, facilitating incontinence. Other working conditions were not explored, so it was not possible to relate this factor with the urinary habit associated, for example, with the scarce availability of hygienic services, as evidenced by other studies[14],[15],[16],[17].

Other factors related to urinary incontinence were obesity and the presence of type 2 diabetes, as has been described by international evidence[6],[10]. Published research estimates that the risk of urinary incontinence in diabetic women is double compared to non-diabetic women[5],[9]. According to the last National Health Survey from 2016 to 2017, 33.7% of the female population will suffer from obesity, and 14% will present type 2 diabetes[23]. As a result, a high proportion of the adult female Chilean population will be at increased risk for urinary incontinence.

In international evidence, the number of deliveries and types of labor are well-known risk factors[4],[5],[6]. In this research, no statistically significant relationship was found for gynecological or obstetric antecedents, although the history of instrumental delivery (forceps) presented a slight association with the presence of urinary incontinence. It could be speculated that, as the fertility rate is currently diminishing in Chile[25]—only 1.68 children per woman—then, proportionally, the number of deliveries loses strength as a risk factor for urinary incontinence. At the same time, the high rate of cesarean sections—37% in the year 2018[26]—could reduce the influence of the type of birth and weight of the newborn child in the development of urinary incontinence.

A limitation of the study is that it was carried out in only one city. At the same time, the study was conducted only in the public sector healthcare centers, which could result in selection bias. Women with private insurance have a better social and economic situation that protects them from health risks while having a lower prevalence of chronic pathologies and better living and working conditions.

Nevertheless, the study also presents strengths. First, the sample was representative of Chilean adult women. La Serena is a city with more than 200 000 inhabitants, in which roughly 88% of the women are registered in primary care centers[28]. Consequently, both the universe and the sample make up a studied population even more comparable with populations at the national level or with other countries. Second, the questionnaire used was previously validated, and its results are consistent with other national and international studies. The above makes it possible to generalize the results to the rest of the country and even internationally by being consistent with international studies. Therefore, it would be possible to affirm that urinary incontinence is, in general, a highly prevalent health problem among adult women.

In Chile, urinary incontinence is currently not framed in a specific health program, so the treatment depends on the patients visualizing urinary incontinence as a relevant health problem and on their spending capacity[13],[22],[24],[29]. It is worth mentioning that neuromuscular intervention in the pelvic area improves the outcome in more than a third of cases, according to a meta-analysis carried out recently[30]. On the other hand, between 20% and 50% of urinary incontinence cases, depending on severity, would require surgical treatment, along with the cost that this entails[31].

A more extensive or multi-center prevalence study would be warranted to guide the design of a national program harmonizing preventive interventions, diagnostics, and multidisciplinary management of urinary incontinence. As a proposal for intervention, primary care centers should be considered the leading providers of education in urinary habits and treatment for mild and moderate stages of the condition. They can also intervene and treat other high-prevalence pathologies, such as obesity and diabetes, which are known risk factors for urinary incontinence. Other kinds of treatment (laser or surgery) could be addressed at secondary or tertiary levels. It has also been suggested that awareness should be created in women regarding urinary habits, together with urging their employers to maintain proper hygienic services in the workplace, as well as ensuring access to urinate when necessary.

This research provides evidence that urinary incontinence is a relevant condition among the Chilean female population, associated with working conditions, constipation, and health problems of high prevalence in the general female population, such as obesity and type 2 diabetes. The epidemiological evidence and the consequences of this condition on the affected women point to a need to tackle the condition, starting with primary health care strategies of intervention.

Acknowledgments
The authors thank physiotherapists Montserrat Fariña and Susana González for their support in accomplishing the requirements of the Ethics Committee regarding giving an educational session to the women who were diagnosed with urinary infection during the study. Also, the authors thank the medical students who participated as surveyors and the health authorities who authorized the surveyors' access to the health facilities.

Funding
The Master's program in Public Health of the Faculty of Medicine, Universidad Católica del Norte, partially funded this research. This article is the result of a thesis to obtain the degree of Master in Public Health.

Competing interests
The authors declare no conflicts of interests.

Ethical aspects
The research was approved in September 2018 by Resolution N° 86 of the Scientific Ethical Committee of the Universidad Católica del Norte, Coquimbo. The data of the study are available upon request to the correspondence author. 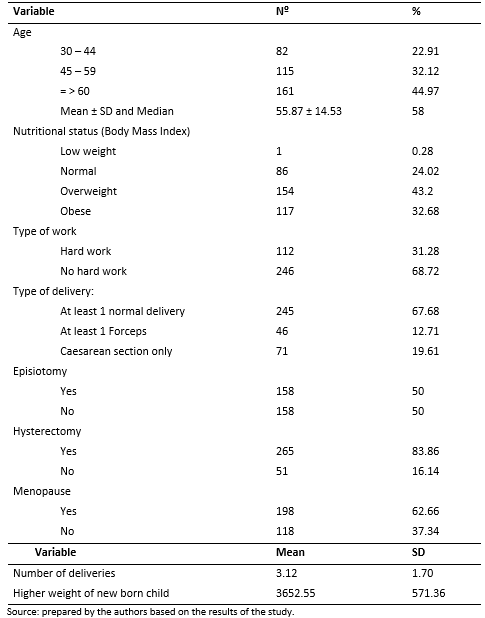 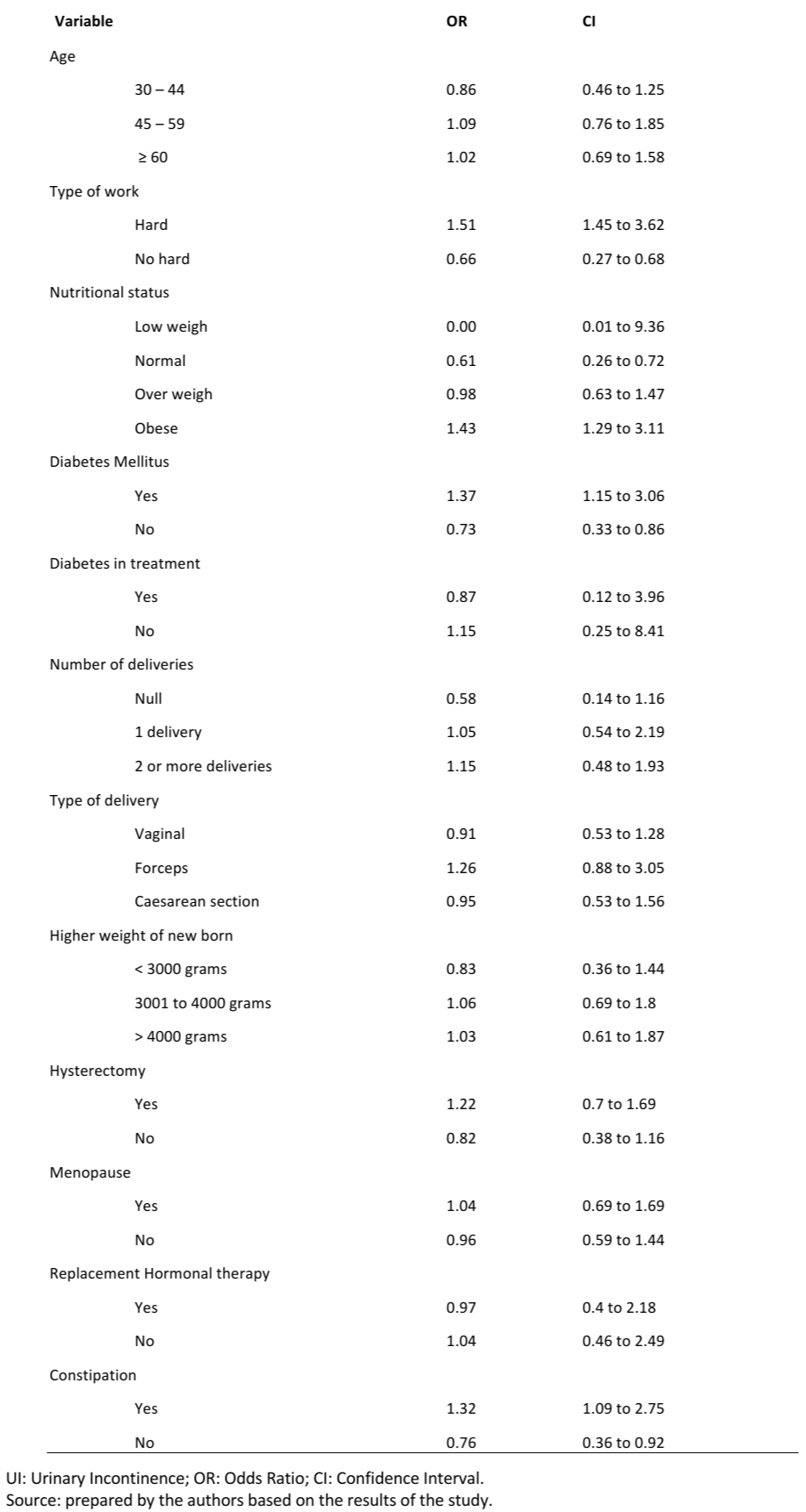