Avoiding irregularities on the nasal dorsum in rhinoplasty

The anatomy of the nasal dorsum is complex and requires intimate knowledge of this in order to ensure that it is properly managed. Dorsal hump reduction is a commonly performed rhinoplasty technique and proper reconstruction is essential to restoring nasal function and aesthetic contour [1].

The middle nasal vault is comprised of paired upper lateral cartilages (ULC), which are articulated superiorly with the distal end of the nasal bones and medially with the cartilaginous septum [2]. The medial edges of the upper lateral cartilages adhere to the lateral anterior septal extension in an end to end form. This union sets an angle of approximately 15 degrees, forming the apex of the internal nasal valve[3].

The nasal skin is thin and the subcutaneous tissue almost inexistent overlying the union of the upper lateral cartilage and bony vault. It is at this location where particular care should be taken in order to achieve a smooth dorsum and continuous aesthetic lines [4].

The sequelae of inadequate management of this area include palpable dorsal irregularities, open roof, inverted V and excessive narrowing of the middle nasal vault. These unwanted surgical stigmata are often the main indications for secondary rhinoplasty [3],[4],[5].

In order to avoid these complications, surgical instruments used in dorsal hump reduction have become more conservative. Currently, the use of rasps has displaced other tools including saws and osteotomes [4]. Additionally there has been a transition from en bloc resection to component resections [4].

Although the visual aesthetic and functional outcome are the most important parameters that determine a successful procedure, the importance of avoiding palpable irregularities cannot be understated. Regardless of the fact that irregularities may not be visible, there is a significant psychological component if the patient can feel abnormalities. Hence, in order to maximize patient satisfaction, every effort should be made to employ available techniques to prevent this complication.

Multiple techniques have been used to camouflage the nasal dorsum including fascia [6], tissue resected from the hump [7], skin grafts [8], alloplastic materials and the more commonly used cartilage [9]. Several authors have used morselized cartilage to conceal irregularities on the nasal dorsum [10],[11],[12],[13].

In the present article, an approach for resection of the hump and restructuring of the nasal dorsum is described. The aim of this technique is to restructure the dorsum anatomy by avoiding palpation of irregularities.

Surgical technique
The septum and dorsum are addressed via open or closed technique (intercartilaginous). The management of the dorsum does not vary by technical approach.

Figure 3: Rasping of the bony hump. 3A Detachment and infolding of the upper lateral cartilages insertion under the nasal bones for protection. 3B Rasping with a coarse rasp.

Smoothing and contouring of nasal bones: This is performed with diamond rasps. Careful sculpting of the nasal bones is performed to both further reduce the hump and smooth any irregularities. The final result should be a smooth and regular dorsum without visual or palpable imperfections (Figure 4). The radix may also be reduced with this technique (Figure 5).

Figure 4A: Contouring of the nasal dorsum with a diamond rasp. 4B: The result is a smooth and soft bony dorsum void of palpable bony irregularities.

Figure 5A: Sculpting Radix with diamond rasp. 5B: Sculpted radix.

Further contouring following osteotomies: After completion of the osteotomies, palpable bony spicules can be generated; these are contoured leaving a smooth and regular dorsum (Figure 6).

Figure 6: Contouring of bony spicules generated by osteotomies. If they are not properly sculpted, these may result in a visible or palpable irregularity. 6A: Bone spicule. 6B: Contoured spicule with a smooth and soft dorsum.

Cartilaginous dorsum closure
the ULC are turned in and sutured to the septal cartilage, functioning as autospreader [14],[15],[16] . Preservation of the cephalic aspect of the upper lateral cartilages that under-ride the nasal bones allow the cartilage to occupy the space between the nasal bones. (Figure 7A, B). 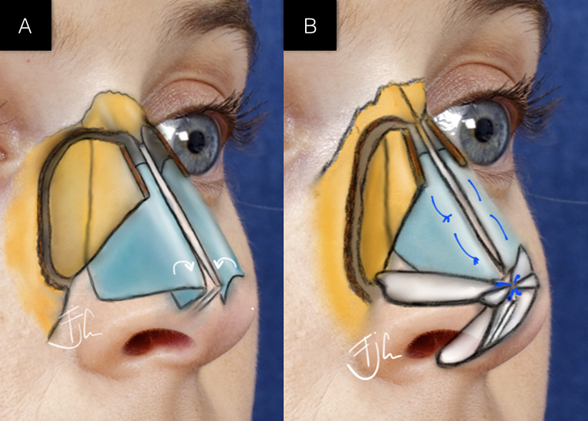 Figure 7: Cartilaginous dorsum is closed using the autospreader technique. 7A: The ULC are folded on themselves. 7B: The ULC are sutured to the septum, and the cephalic portions of the ULC fill the area between the nasal bones. This cephalic in-fold prevents excessive medial movement of the nasal bones.

Molding
After closure of the dorsum, there space between the nasal bones is usually palpable. This space can be filled and molded with morselized cartilage (Figure 8 A, B, C).

An additional sheet of thin morselized cartilage in the shape of the dorsum is overlaid, covering any residual imperfections [5] (Figure 9).

Figures 9A, 9B: Camouflage of the dorsum using a morselized sheet of cartilage. 9C: Ideal placement of the morselized cartilage sheet 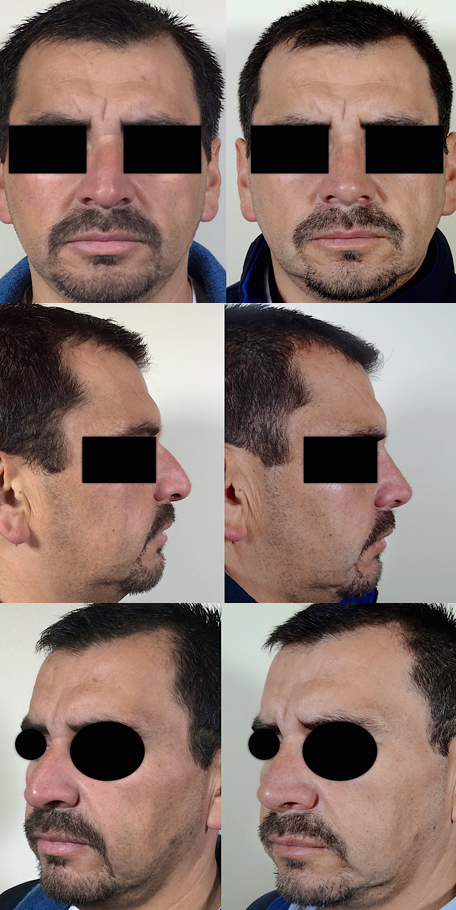 Figure 12: Clinical outcomes of nasal dorsum in oblique view, where appropriate continuity and transition from the bony to cartilaginous region are visualized. There are no stigmas of inverted V, the dorsa are visualized smooth and natural looking.

The anatomy of the nasal dorsum is complex, so the restructuring after resection of the hump is a challenge. It is very important to achieve an aesthetically pleasing and natural dorsum, which should feel soft and smooth when touched.

We often find that patients who underwent rhinoplasty complain about the presence of irregularities after palpation of the nasal dorsum including subsidences and bone spicules, among others. These issues are a major cause of secondary rhinoplasty [3],[4],[5], due to an open roof or resection not performed properly [5],[9],[10],[11],[17].

It is essential in the final result the protection and formation of the dorsum aesthetic lines (Figures 10, 11 and 12), because they define the appearance of the dorsum in the frontal and oblique view. This can be achieved by performing an accurate resection of the bony hump, respecting the lateral cartilages and restructuring the anatomy of the nasal dorsum properly (Figure 7).

Multiple camouflage techniques are available for restructuring of the nasal dorsum, but the use of autologous cartilage provides many advantages including minimal resorption, infection and extrusion ranges [18].

Studies with morselized cartilage have exposed its properties as a long-term graft, which shows a direct relationship between the proliferation of chondrocytes and the different degrees of crushed [10],[11]. Light crushed degrees achieve higher levels of chondrocyte proliferation, preserving its viability. While severe degrees of crushed inhibit chondrocyte proliferation altering the viability and obtaining an unpredictable loss of volume graft [10],[11]. Therefore, a graft from mild to moderate crushed grade, delivers excellent tool adjustment, filler and camouflage on the nasal dorsum [5] (Figure 9).

From the author perspective, in order to avoid the apparition of irregularities on the dorsum, there are three key steps: 1. Sculpting of nasal bones with diamond rasp will provide a more regular surface by eliminating bony spicules (Figure 6); 2. Use of morselized cartilage sheet as camouflage (Figure 9); 3. Use of autospreader (Figure 7) as the upper lateral cartilage is protected; this subsequently fills the open roof area between the nasal bones, especially in the osteochondral joint area.

The anatomy of the nasal dorsum following resection of the hump must be structured properly. Thereby we avoid any palpation of irregularities and an adequate cosmetic result is achieved.

Ethical aspects
Informed consent forms, requested by Medwave, have been signed by the patients. A copy of each was sent to the editorship of the Journal.

Conflicts of interest
The authors completed the ICMJE conflict of interest declaration form, translated into Spanish by Medwave, and declare not having received funding for the preparation of this report, not having any financial relationships with organizations that could have interests in the published article in the last three years, and not having other relations or activities that might influence the article´s content. Forms can be requested to the responsible author or the editorial direction of the Journal.

Funding
The authors declare there were no financing from external sources.