Is ursodeoxycholic acid effective for intrahepatic cholestasis of pregnancy?

Intrahepatic cholestasis of pregnancy is a condition associated with fetal morbidity and mortality. Ursodeoxycholic acid has been proposed as a treatment alternative, but its use remains controversial. Searching in Epistemonikos database, which is maintained by screening 30 databases, we identified three systematic reviews including eight randomized trials. We combined the evidence using meta-analysis and generated a summary of findings table following the GRADE approach. We concluded ursodeoxycholic acid reduces prematurity risk and need for admission in neonatal intensive care units. It might also reduce maternal pruritus.

Intrahepatic obstetric cholestasis is an exclusive condition of pregnancy. The highest prevalence is in South America and Scandinavia, where it is about 6-29% [1]. It is characterized by the appearance of severe palmoplantar pruritus predominantly nocturnal, during the third trimester of pregnancy, which may be associated with elevated liver enzymes and bile acids. The etiology of this condition is not completely understood, but genetic, hormonal and environmental factors would be involved [2]]. It has been associated to an increase in premature delivery, neonatal respiratory distress syndrome and spontaneous fetal death, among others.

Ursodeoxycholic acid could reduce symptoms and adverse outcomes decreasing hepatocellular damage and placental transfer of bile acids by replacing toxic endogenous bile acids without altering the biliary function [3],[4]. However, there is controversy about the real usefulness of this intervention. 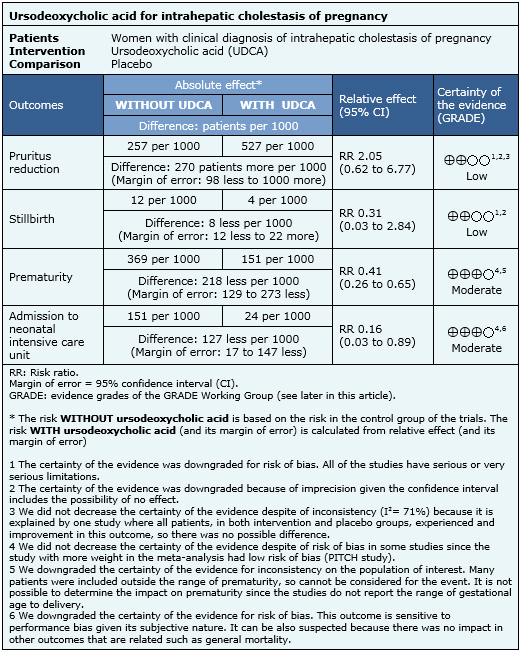 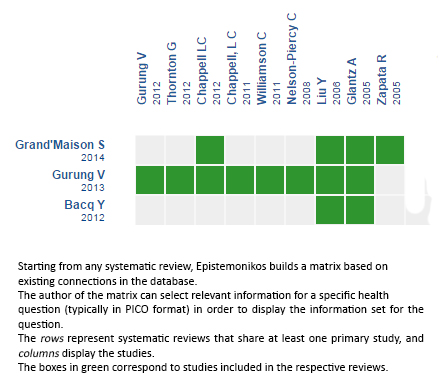 Follow the link to access the interactive version: Ursodeoxycholic acid versus placebo for intrahepatic cholestasis of pregnancy