Is honey an effective treatment for acute cough in children?

Cough represents one of the most common reasons for pediatrician consultations. There are many available treatments for symptomatic relief, including honey. Despite its wide availability, there is little knowledge about its benefits. Searching in Epistemonikos database, which is maintained by screening 30 databases, we identified three systematic reviews including three randomized trials. We combined the evidence using meta-analysis and generated a summary of findings table following the GRADE approach. We concluded the use of honey probably decreases the severity and frequency of cough, improves the quality of parent's and patient's sleep, and does not have side effects.

Cough is a complex physiological event consisting of a violent expiration in order to release secretions, foreign material or bronchospasm airway driving and protect the respiratory system from chemical, infectious, mechanical and thermal agents. Acute cough lasts less than four to eight weeks (depending on the definition used). It is not a disease in itself but a symptom related to many respiratory diseases. Depending on the intensity and frequency of the cough, it often leads to a negative impact on the quality of life for both the child and his family, generating a high number of medical consultations.

It has been suggested that honey, due to its antioxidant properties and the release of cytokines, could be used as treatment.

Despite of being a widely available treatment, there is little information about its effects.

We used Epistemonikos database, which is maintained by screening more than 30 databases, to identify systematic reviews and their included primary studies. With this information we generated a structured summary using a pre-established format, which includes key messages, a summary of the body of evidence (presented as an evidence matrix in Epistemonikos), meta-analysis of the total of studies, a summary of findings table following the GRADE approach and a table of other considerations for decision-making.

The information about the effects of honey for the treatment of acute cough is based on three randomized trials [4], [5], [6] including 568 patients. All of the studies reported frequency and severity of cough, and parent’s and children’s quality of sleep. Only one study reported the side effects of honey versus placebo [4]. 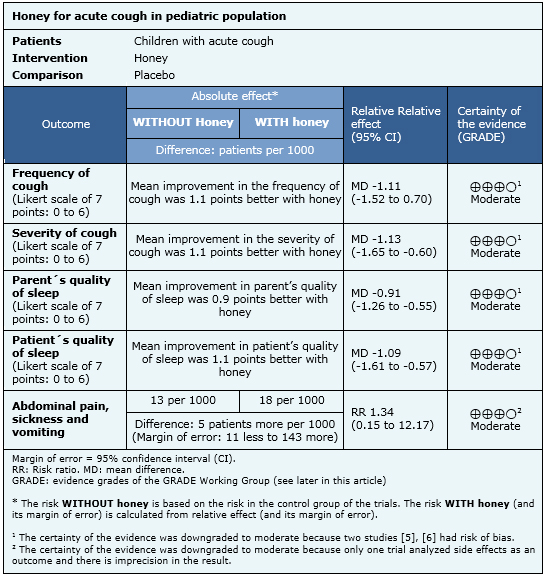 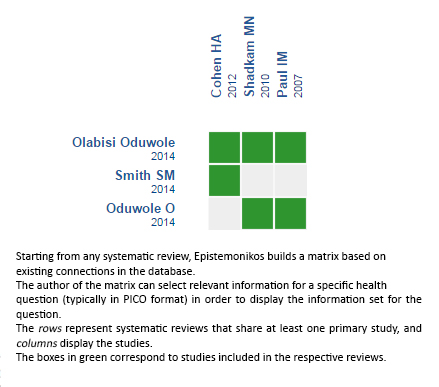 Follow the link to access the interactive version: Honey versus no treatment or placebo for acute cough in children