Are cannabinoids effective for treatment of pain in patients with active cancer?

Cannabinoids have been proposed for the treatment of patients with cancer pain, especially if standard treatment does not control symptoms. Using Epistemonikos database, which is maintained by searching 30 databases, we identified nine systematic reviews including seven trials that answer the question of interest, of which six are randomized trials. We performed a meta-analysis and generated a summary of findings table using the GRADE approach. We concluded it is unclear whether cannabinoids decrease pain and improve quality of life in patients with refractory cancer pain because the certainty of the evidence is very low, and it probably increases adverse effects substantially.

Cannabis has been used for centuries both recreationally and therapeutically. However, its use has been restricted since the United Nations banned it in 1971. The interest in potential therapeutic uses led to the discovery of endocannabinoid receptors CB1 and CB2, which through a G-protein associated mechanism, would lead to reduced pain. Considering many cancer patients persist with pain despite maximal analgesic therapy, plant extracts with the active agent delta-9-tetrahydrocannabinol or its analogues have been proposed. However, it is unclear what their real clinical role is.

We used Epistemonikos database, which is maintained by screening more than 30 databases, to identify systematic reviews and their included primary studies. With this information we generated a structured summary using a pre-established format, which includes key messages, a summary of the body of evidence (presented as an evidence matrix in Epistemonikos), meta-analysis of the total of studies, a summary of findings table following the GRADE approach and a table of other considerations for decision-making.

The information on the effects of cannabinoids is based on two randomized trials (290 participants) that evaluated patients with refractory pain [14],[15]. Both trials measured reduction of pain and one reported quality of life [14]. The information on adverse effects is based on a systematic review [7] evaluating adverse effects of cannabinoids in different populations, and includes 29 studies reporting this outcome. 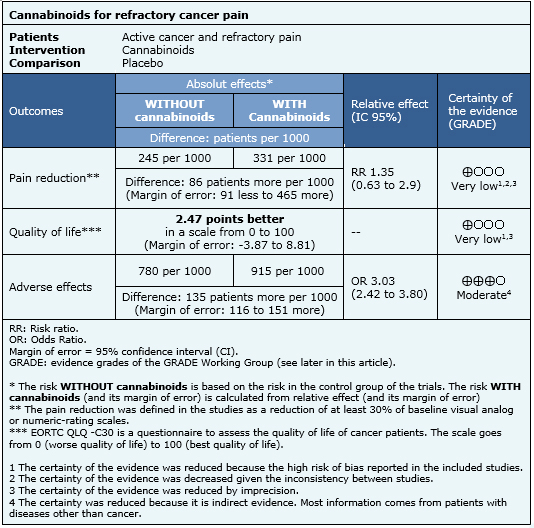 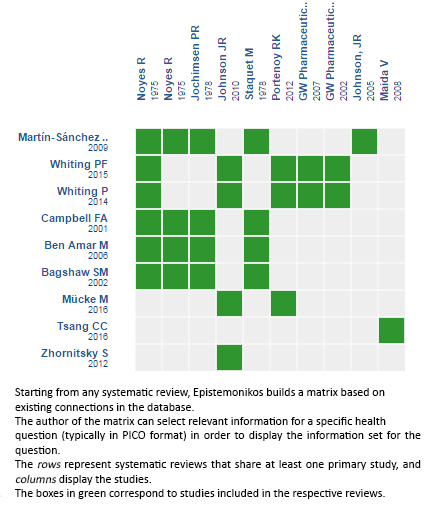 Follow the link to access the interactive version: Cannabinoids for treatment of pain in patients with active cancer