Are leukotriene inhibitors useful for bronchiolitis?

Bronchiolitis is a prevalent disease in children under two years of age, which carries significant morbidity and mortality. However, there is controversy regarding the optimal therapeutic management. Leukotriene inhibitors have been proposed as an alternative, although its efficacy is not clear yet. Searching in Epistemonikos database, which is maintained by screening multiple databases, we identified two systematic reviews comprising six trials addressing the question of this article. We extracted data, combined the evidence using meta-analysis and generated a summary of findings following the GRADE approach. We concluded leukotriene inhibitors might not decrease mortality levels on bronchiolitis patients and it is not clear whether they decrease length of hospital stay. They might reduce recurrent wheezing, but the certainty of the evidence is low, and they increase adverse effects.

Bronchiolitis is characterized by low respiratory tract inflammation due to a viral infection. It mainly affects children under two years of age, especially in winter, and demands health services, leads to high hospitalization rates, ventilation requirements and even mortality. In addition, a higher incidence of recurrent wheezing has been observed in these patients. In general, there is controversy regarding the management of bronchiolitis. Among the therapeutic alternatives, the efficacy of leukotriene inhibitors has been proposed, since the pathogenesis of bronchiolitis involves the stimulation of the enzyme lipoxygenase-5, which participates on leukotriene synthesis. These molecules have been identified as contributors to airway inflammation, airway and alveolar obstruction, mucosal edema and increased bronchial reactivity.

The present summary seeks to evaluate whether leukotriene inhibitor therapy is a useful and safe alternative for the management of pediatric patients with bronchiolitis.

We used Epistemonikos database, which is maintained by screening multiple databases, to identify systematic reviews and their included primary studies. With this information, we generated a structured summary using a pre-established format, which includes key messages, a summary of the body of evidence (presented as an evidence matrix in Epistemonikos), meta-analysis of the total of studies, a summary of findings table following the GRADE approach and a table of other considerations for decision-making.

Both trials evaluated the use of tetrahydrocannabinol capsules administered orally. In one trial, the dose was 5 mg, 7.5 mg or 10 mg once [9], and in the other trials, the dose was not specified [8].

Both trials compared against placebo. 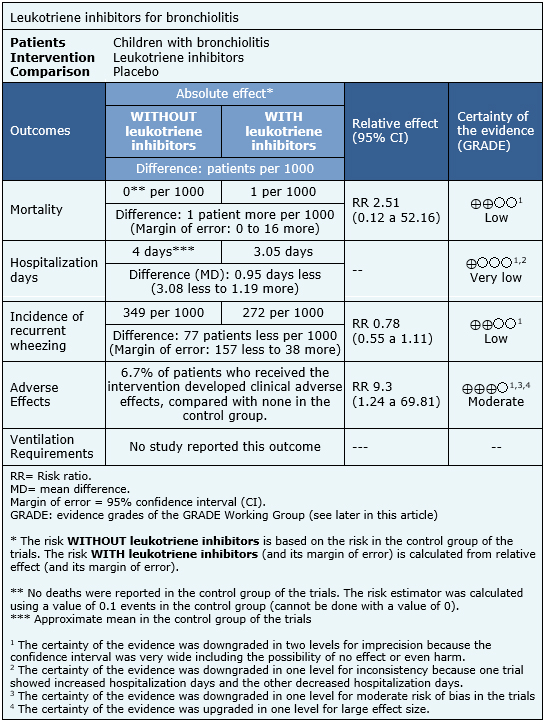 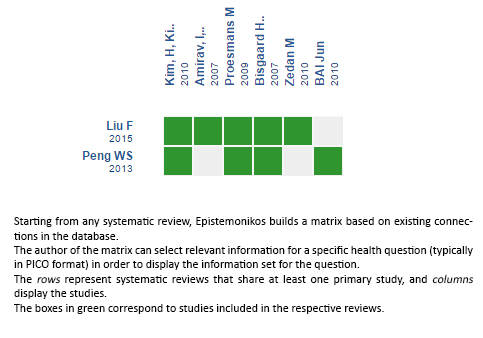