Idiopathic pulmonary fibrosis has poor prognosis and effective therapies are scarce. In the search for treatments that can modify the course of the disease, nintedanib (BIBF 1120), a tyrosine kinase inhibitor, has emerged as an alternative. However, its role is still unclear. To answer this question, we searched in Epistemonikos database, which is maintained by screening multiple sources of information. We identified seven systematic reviews including seven randomized trials overall. We extracted data, conducted a meta-analysis and generated a summary of findings table using the GRADE approach. We concluded nintedanib probably decreases the risk of acute exacerbations, and might reduce mortality in idiopathic pulmonary fibrosis. On the other hand, it is probably not associated with serious adverse events.

Idiopathic pulmonary fibrosis is a rare condition of unknown etiology [1]. The prognosis of this disease is poor and until the last decade, there were no interventions with a proven benefit on survival [2]. After diagnosis, survival decreases rapidly and factors such as acute exacerbations, time to disease progression and deterioration in respiratory functions are associated with a poorer prognosis [3],[4].

We used Epistemonikos database, which is maintained by screening multiple databases, to identify systematic reviews and their included primary studies. With this information, we generated a structured summary using a pre-established format, which includes key messages, a summary of the body of evidence (presented as an evidence matrix in Epistemonikos), meta-analysis of the total of studies, a summary of findings table following the GRADE approach and a table of other considerations for decision-making.

The information on the effects of nintedanib is based on three randomized trials [6],[18],[19] which included 1231 patients. The other four trials were not used in this analysis because they did not report enough data to be incorporated into a meta-analysis. All trials measured mortality, acute exacerbations, and serious adverse events. The summary of findings is as follows: 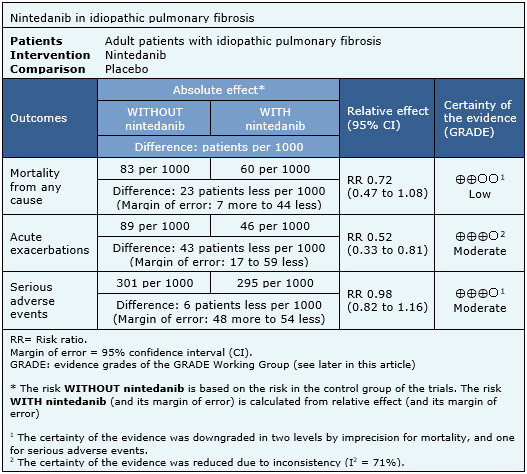 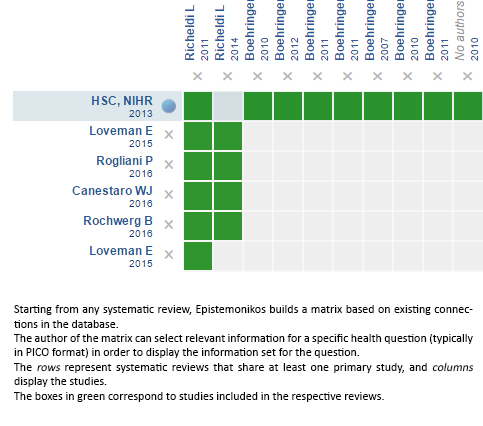