Do cannabinoids constitute a therapeutic alternative for anorexia nervosa?

INTRODUCTION Cannabinoids have been postulated as an alternative for anorexia nervosa. However, their actual clinical efficacy and safety are still discussed.

METHODS To answer this question we used Epistemonikos, the largest database of systematic reviews in health, which is maintained by screening multiple information sources, including MEDLINE, EMBASE, Cochrane, among others. We extracted data from the systematic reviews, reanalyzed data of primary studies and generated a summary of findings table using the GRADE approach.

RESULTS AND CONCLUSIONS We identified four systematic reviews including two primary studies, both corresponding to randomized trials. We concluded cannabinoids might not increase weight or improve symptoms in anorexia nervosa, and are probably associated to frequent adverse effects.

Anorexia nervosa is an eating disorder characterized by distortion in body image perception leading to weight loss and malnutrition. It causes important work, social and family dysfunction, and in severe cases it can be fatal.

Cannabinoids, by their effects as appetite stimulants would promote weight gain and so constitute a therapeutic alternative in anorexia nervosa.  However, its clinical effects and safety still generate controversy among patients and clinicians.

The information on the effects of cannabinoids for anorexia nervosa is based on two trials that included a total of 36 patients [5],[6],[7].

The trials measured weight and symptoms based on clinical efficacy scales: HSCL-90, GAAQ, SDS, and PRS. The summary of findings is the following: 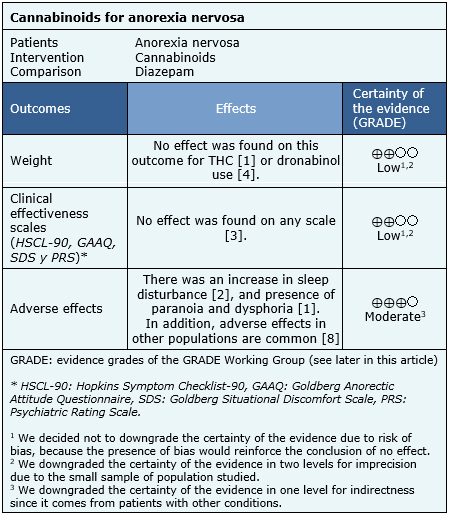 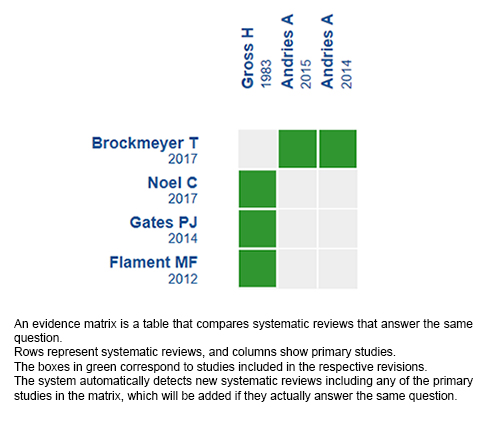