INTRODUCTION Fibromyalgia is characterized by myalgia and a combination of different symptoms including pain, fatigue, insomnia, morning rigidity, depression and a reduction in every-day functioning. Its aetiology is not clear, but it has been suggested that deficiency in certain minerals such as magnesium may play a role both in the physiopathology and in contributing to the symptoms.

METHODS We searched in Epistemonikos, the largest database of systematic reviews in health, which is maintained by screening multiple information sources, including MEDLINE, EMBASE, Cochrane, among others. We extracted data from the systematic reviews, reanalyzed data of primary studies, conducted a meta-analysis and generated a summary of findings table using the GRADE approach.

RESULTS AND CONCLUSIONS We identified seven systematic reviews which included 11 primary studies of which one was a randomized trial. Our conclusion is that the use of magnesium and malic acid in patients with fibromyalgia makes little or no difference on pain and on depressive symptoms.

Fibromyalgia is a nonarticular rheumatic syndrome characterized by myalgia and multiple points of focal muscle tenderness to palpation (trigger points). This condition is often associated with general symptoms, such as sleep disturbances, fatigue, stiffness, headaches, and depression. It has a relatively high global incidence (0.5 to 5%) and affects mainly women aged 20 to 50 years [1].

Although research into this syndrome is increasing, the aetiology is not clear, although the symptoms are thought to be due to nociceptive or neurogenic mechanisms. The peripheral pain is stimulated at a spinal level through a combination of central hyperexcitability and a lack of descending inhibitory control [2].

Magnesium is involved in the modulation of muscle contraction and the regulation of enzyme reactions related to energy metabolism, neurotransmission and cerebral activity. In addition as a trace element, it has a role in the synthesis of ATP and in regulating muscle metabolism. it has been suggested that it may have a role in the physiopathology of fibromyalgia and may contribute to the reduction of symptoms.

Malic acid also has a role in the synthesis of ATP as it contributes to the stability of the mitochondrial membrane, to mitochondrial respiration and oxidative phosphorylation.

The information about the effects of magnesium and malic acid is based on only one trial that included 24 participants [11].
This trial [11] reported pain (24 patients) and depression (24 patients). Functionality was not analyzed by any of the systematic reviews. 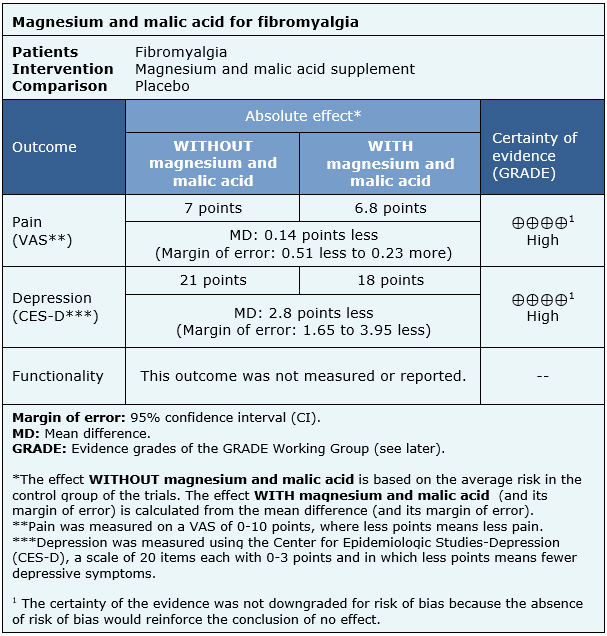 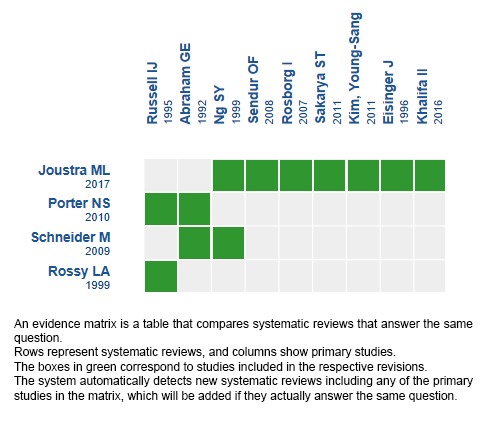