INTRODUCTION The use of bibliometric indicators for the evaluation of science allows an analysis of scientific production both from a quantitative and qualitative point of view.

OBJECTIVE To characterize the scientific production of Medwave during the period 2010 to 2014 in terms of visibility and productivity.

METHODS A bibliometric study was carried out. Variables analyzed were offered by the “Publish or Perish” program working with the Google Scholar database. The number of articles published were related to the number of authors involved in each research work. The articles cited, number of citations, authors and year were reported. Indicators were obtained by placing in name of the journal and its International Standard Serial Number (ISSN) in the navigation box of Publish or Perish.

RESULTS There were 481 articles published with 220 citations; at a rate of more than 36 citations per year and 20 citations per author and year. An index h = 5 and index g = 6 were achieved. There was an average of two authors per article. Only five articles had more citations than the total they provided.

CONCLUSIONS The scientometric indicators found place the journal in a favorable position relative to other medical journals of the region, in terms of visibility and productivity. There was a low rate of cooperation since articles with individual authors prevailed. A low number of articles contributed to the productivity of the journal despite having significant number of citations.

Today, when information science develops, bibliometric studies attain an extraordinary meaning. Their function is to evaluate quantitatively and qualitatively, the final product of research conducted in a given context. At the same time they measure productivity and visibility of the journal under examination [1].

Scientific [2] journals, as the one object of the undergoing study, permanently receive an evaluation process. This process allows them to gain a value in the dissemination of scientific work of the authors and, in turn, the authors recognize this value and submit their work to the more acknowledged journals.

Patrón et al [3] claim that thanks to the bibliometric indicators, scientific activity becomes valid when one of the final products of the research process is palpable, contributing to the scientific community with new skills and behaviors before different medical situations. Espino et al [4] defined them as tools to assess the progress of a publication, identify gaps and set specific strategies for their solution. They are especially useful when designing policies to visualize a journal and display its productivity.

Handling bibliometric indicators allows a statistical analysis of the behavior of science through its scientific production and also helps identify research areas that are being developed or left aside. So that Guerra et al [5] states that "bibliometric studies are becoming increasingly important for the scientific community due to their valuable contributions to the knowledge of the state of the art of an area or research topic."

For these reasons the authors´ aim with this report is to characterize the scientific output in terms of visibility and productivity, of Medwave, indexed in Google Scholar, through the scientometric indicators offered by the program Publish or Perish [6] in the period 2010 to 2014.

A bibliometric, descriptive and retrospective study was conducted to characterize the scientific output of Medwave, a journal indexed in Google Scholar, in terms of visibility and productivity in the period 2010- 2014. This was made through the scientometric indicators offered by the program Publish or Perish. The sample was made up of 481 articles published in the period under review. The following indicators were obtained on June 24th, 2016:

Furthermore, each of these indicators is accurately explained in the user manual [8] of the Publish or Perish program. The number of articles published according to the number of authors involved in research is displayed. We also show the titles, number of citations, authors and citations per year of the articles that contributed to the journal productivity.

The search for the indicators was performed by introducing the name of the journal (Medwave), its ISSN (0717-6384), and the study period in the navigation box of the Publish or Perish software.

We proceeded to the analysis of all the information obtained, comparisons were made with other studies and literature was also consulted. The results are expressed in a contingency table and a simple bar chart.

Table I shows the scientometric indicators characterizing the journal being analyzed in the period from 2010 to 2014. There were 481 articles published with a total of 220 citations, at a rate of about 36 citations per year. Articles with two or fewer authors each predominated (Figure 1).

The number of authors per article is concentrated in the vast majority between one or two researchers (Figure 1).

Table II shows the visibility of the ten most cited articles of the journal Medwave in the period under review. Those who contributed to the index H were those who had five or more citations (six articles). The year with more visibility was 2012.

The dynamic growth of information technology and communications has enabled access to scientific production of professionals from anywhere, anytime. This is why, the assessment of production processes and communication of scientific knowledge resulting from research activity is an increasingly growing need [14].

Scientific research is a primary activity of universities. The visibility of scientific articles is important for researchers, for the academic institutions in which they work and for organizations giving research funding. Since it is complex to individually evaluate each manuscript, the application of scientometric indices that measure the citations received by the journals in which they were published, is widespread, assuming the visibility of journals can be applied to all manuscripts published in them [15].

This harmonizes with Reyes et al [16] who claim that the publication of a journal "online", exclusively or combined with a printed version, increases its visibility by providing access to an area of more readers than only subscribers to the printed version. This is most noticeable if the electronic version is included in a database widely available allowing free access to articles, either through the title and English abstract (case  of PubMed) or also to the full text (case of SciELO). Hence the importance of incorporating the journals to international and national databases with high visibility.

It was shown that Medwave´s productivity is higher than the Medicentro Electronic Journal [17] published in Cuba. This is regarding the number of years studied and the number of articles published, though in different time periods; both journals provide 481 and 444 articles respectively. This was not the case of the Journal of Information Science (Revista de Ciencias de la Información) in Cuba that doubled Medwave´s productivity according to Arencibia [18].

The transparency of a journal is manifested through the citations received by its articles over a period of time. In the present case we had over 130 citations per author and over 20 citations per author each year of study. This shows that the space occupied in scientific communication of articles published in Medwave was satisfactory. In this sense, the results are superior to bibliometric findings in a medical journal in Granma, Cuba (Gallardo, 2016, unpublished results). Many researchers [3],[4],[5],[6],[7],[14],[15] coincide with these indicators, but differ in that they are computed in databases such as Wok and Scopus.

According to Mitras, cited by Peralta González et al [19], the impact indicators, visibility and quality are the most controversial and questionable in the bibliometric field. They refer to the final value, influence or impact of documents in other publications. They are associated with directions reached by bibliographic citations and are generally linked to the impact factor and citation index.

In recent times the h-index is a bibliometric indicator that gains power as a reference for the research career compared to the impact factor mainly because it unifies spread and impact. According to some researchers [20] "its main weakness is it does not appreciate the queues of citations above or below the index and thus promotes mass producers of articles and penalizes selective producers".

In the analyzed case we found that there are five published articles cited at least five times. This expresses in some extent a pleasant productivity. Other medical journals indexed in Google Scholar show a lower h index, such as Multimed (a medical journal in Granma, Cuba). The g index, first described in 2006, states that the amount of citations accumulated by the six most cited articles is over six-squared.

"From a historical and sociological perspective, the participation of several authors in the development of a work is a result of the professionalization of the scientific community [21]". When Figure 1 is analyzed it is clear that cooperation between researchers is almost nil, more than half of the authors publish their articles on an individual basis and only 48.1% of the studies are conducted in collaboration. This element disagrees with Barranco et al [22], who find collaboration among researchers who published their articles in Revista Enfermería Global, published by the University of Murcia.

In a scientometric study completed in Cuba, to Multimed (a medical journal from Granma province); a larger collaboration between researchers was found, since articles with three or more authors (Gallardo, 2016) predominated; a fact that differs from that found in the present study.

Researchers like Gómez García et al [23] in a bibliometric study with Revista de Educación XX1 in Spain, obtained the predominance of participation of one to two authors per article published in the period 2000-2009. Event in accordance with the results of this investigation.

Table II shows the ten most cited papers in Medwave in the period analyzed, stating the title of the published research, citations received, year of publication and authors. The year of greatest impact in the period analyzed was 2012. All this points out that Medwave, despite having only a little more than a decade of being launched, is already indexed in databases with international impact a fact that helps the spread of scientific knowledge from its articles and therefore to get more citations. Among these databases are: MEDLINE / PubMed, Google Scholar and LILIACS. In addition, in the directories: DOAJ and LATINDEX.

In conclusion, we obtained (through the program Publish or Perish) the more specific scientometric indicators of Medwave allowing for its visibility and productivity. There was a low rate of cooperation among authors since articles with individual authors prevailed. The insufficient number of articles that contributed to the productivity of the journal dominated despite having significant number of citations.

These indicators should be a starting point for further editorial work and allowing Medwave to be an example of quality in scientific production for Chile, Latin America and the world. 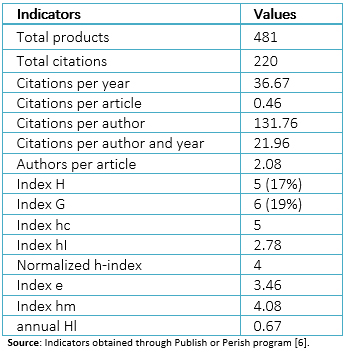 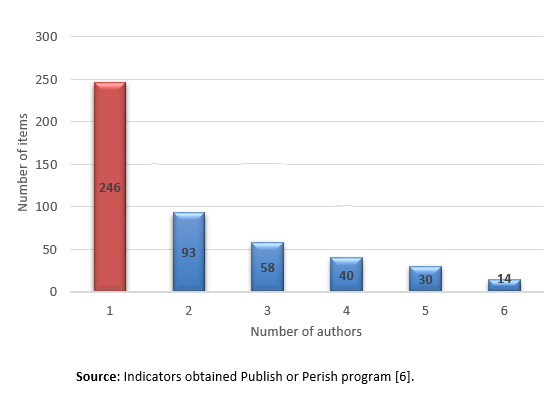 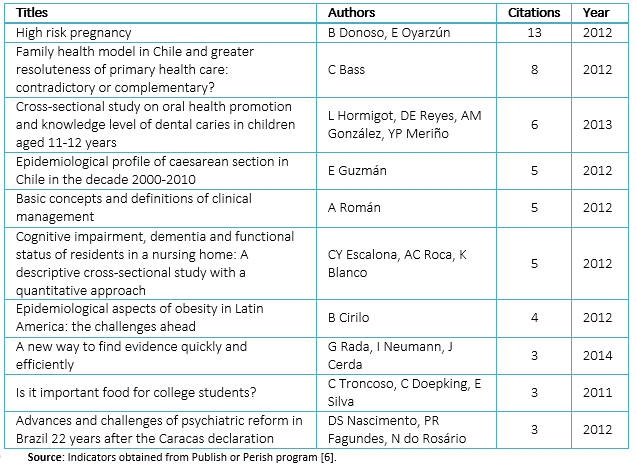