Inflammatory bowel disease is a chronic disorder characterized by exacerbation and remission periods of diarrhea, lower gastrointestinal bleeding, abdominal pain, fever, fatigue, and weight loss [1]. The two primary forms of inflammatory bowel disease are Crohn’s disease and ulcerative colitis, which have increased their incidence in recent decades among developed and developing countries [2].

Vitamin D is an essential fat-soluble biomolecule since it participates in many biochemical and physiological processes, including calcium and phosphorus metabolism [3],[4]. Vitamin D is ubiquitously present in tissues and is obtained through the exposure of the skin to ultraviolet light from the sun or through dietary intake of dairy products, egg yolk, red meat, and fish [4],[5],[6].

Some studies observed that vitamin D regulates the immune response [2],[7],[8] and improves the composition of the colonic microbiota and intestinal barrier, therefore playing a vital role in inflammatory bowel disease [6],[9]. Several studies have observed that high serum levels of vitamin D decrease the recurrence of inflammatory bowel disease [10],[11], and its deficiency increases the risk of clinical relapse and disease reactivation [12],[13]. Consequently, the clinical benefit seen by some authors suggests vitamin D as an attractive treatment option [9], although the optimal thresholds are unclear [14],[15]. This review aims to analyze the evidence on vitamin D supplementation in adult patients with Crohn’s disease and ulcerative colitis.

The present study corresponds to a narrative review. Primary studies published between 2015 to 2020, in English and Spanish, were included. The Web of Science and PubMed databases search engines were consulted. The following keywords were included in the search engine: "vitamin d therapy", "vitamin d supplementation", "vitamin d treatment", "inflammatory bowel disease", "Crohn’s disease", and "ulcerative colitis". Studies were eligible according to the following inclusion criteria:

Inflammatory bowel disease is a chronic disorder that causes gastrointestinal tract inflammation [16],[17]. Crohn’s disease can alter the gastrointestinal wall from mouth to the perianal area, while ulcerative colitis generally only affects the colon and rectum [17],[18]. Currently, inflammatory bowel disease onset is considered to be influenced by genetic, immunological factors, environmental interactions, smoking, and drugs, among others [19],[20],[21].

Crohn’s disease and ulcerative colitis usually present with diarrhea with or without mucus and abdominal pain [22]. The severity of symptoms increases in flare-ups and may include fistulas, abscesses, and strictures in Crohn’s disease; and bleeding, perforation, pseudopolyps, and toxic megacolon in ulcerative colitis [23],[24]. In addition to the gastrointestinal damage, some patients may develop extraintestinal symptoms whose persistence is associated with exacerbations [25].

The assessment of disease activity for Crohn’s disease is performed using the Crohn’s Disease Activity Index (CDAI) and Harvey-Bradshaw index (HBI) [26]. Through the CDAI, a score lower than 50 corresponds to remission, and higher than 150 corresponds to a crisis. A crisis usually involves liquid stools, severe abdominal pain for more than seven days, and the use of antidiarrheals, extraintestinal complications, among other symptoms [26]. The HBI index evaluates daily liquid stools, abdominal pain, abdominal mass, and extraintestinal manifestations for seven days, classifying the active state with a score equal to or greater than seven [23],[24],[25],[26]. For ulcerative colitis, the Mayo Clinic severity index is used. This score also considers blood in stool and classifies crisis into mild, moderate, and severe with scores between 3 and 4, 5 and 8, and 9 and 12 points, respectively [24].

Crohn’s disease and ulcerative colitis are complex pathologies to manage during flare-ups. In this reactivation period, 20 to 40% of patients develop extraintestinal manifestations and potentially life-threatening complications [16]. Moreover, 50% of patients with Crohn’s disease and 20% to 30% of individuals with ulcerative colitis usually require surgery during activity periods [16]. In addition, patients with active inflammatory bowel disease have a 70 to 80% chance of relapse in the following year [17].

Vitamin D stands out for its multiple functions in the human body, including calcium homeostasis and exerting actions as a prohormone [27]. From a molecular perspective, vitamin D presents as ergocalciferol (vitamin D2) and cholecalciferol (vitamin D3) [4]. The latter is the primary source of vitamin D in nature since it can be endogenously synthesized with ultraviolet light from the sun [28]. Additionally, dietary intake represents 20% of the daily requirement [4],[6].

Regarding its anti-inflammatory role, vitamin D inhibits the synthesis of prostaglandins, decreasing intestinal permeability and hindering the proinflammatory function of immune cells [10]. Additionally, it suppresses the activity of lymphocyte subtypes, causing reduction of the inflammatory cytokines such as interleukin-2 (IL-2) and tumor necrosis factor-alpha (TNF-α) [8],[13]. On the other hand, it has been shown that this vitamin modulates the activity and differentiation of monocytes and macrophages and increases anti-inflammatory cytokines such as interleukin 10 (IL-10) and 12 (IL-12) [8],[35].

Patients with inflammatory bowel disease are more likely to have vitamin D deficiency. These patients lack a safe sunlight exposure threshold [14] due to the increased risk of melanoma [15]. Additionally, it is common that patients fail to meet the dietary intake recommendations since some foods containing vitamin D are associated with increased symptoms [15].

supplementing 5000 to 10 000 international units per day of vitamin D in subjects with active inflammatory bowel disease for 12 weeks contributed to a reduction in clinical symptomatology. Garg et al. also found that the therapy did not have serious adverse events while decreasing the activity index steadily and controlling recurrence through CDAI for Crohn’s disease and HBI for ulcerative colitis [42]. Another study by Garg et al. [43] in 2018 found that 40 000 international units per week of vitamin D in subjects with active ulcerative colitis favored a reduction in intestinal inflammation by Mayo Clinic Severity Index and Colitis Activity Index. It should be noted that vitamin D levels reported by Garg et al. [43] were above the recommendations of the Spanish Society of Endocrinology [29], so extending the period of supplementation of this dose may result contradictory. Although no serious adverse effects were observed, these could develop while maintaining high serum vitamin D levels during prolonged supplementation periods.

A beneficial effect of vitamin D supplementation between 5000 and 10 000 international units per day has been found to reduce symptomatology and recurrences in active inflammatory bowel disease.

Acknowledgments
The authors would like to thank Dr. José Fernández Cao and Dr. (c). Sergio Jiménez Torres for their contribution to this article.

Competing interest
The authors completed the ICMJE conflict of interest statement and declared that they received no funding for the completion of this article; have no financial relationships with organizations that may have an interest in the published article in the last three years; and have no other relationships or activities that may influence the publication of the article. Forms can be requested by contacting the responsible author or the Editorial Board of the Journal.

Funding
The authors declare that they have no source of funding.

Ethics
This article is exempt from approval by an ethics committee because it corresponds to a secondary study. 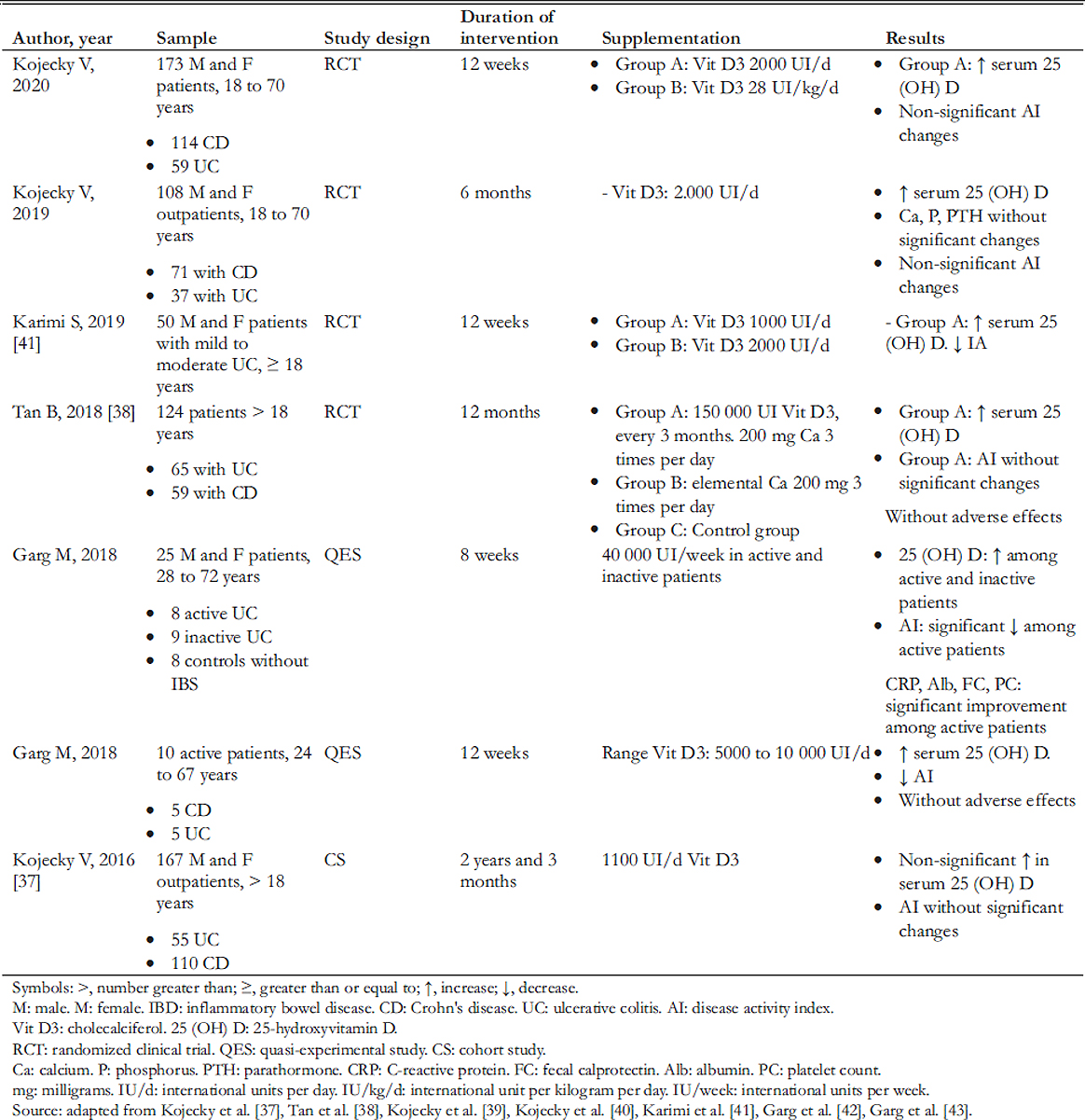