Objective To determine the scientific production of doctoral graduates in Peru.

Methods We made a descriptive cross-sectional study with a quantitative analysis approach of the scientific production of doctoral graduates in all areas of science registered in the National Council of Science, Technology and Technological Innovation of Peru.

Conclusions Only six out of 10 Peruvian doctoral graduates have published at some point in their life. The areas of science with the highest production by doctoral graduates were Natural Sciences, Engineering, and Health Sciences. There is higher scientific production in males and graduates from a foreign university.

Human resources in Science, Technology, and Technological Innovation are pillars for countries' scientific and technological development and the improvement of their competitiveness [1],[2].

It is expected that professionals with a doctoral degree contribute to the development of science because of the training received in postgraduate programs. This training process is completed through activities that aim to generate knowledge and innovation that contribute to the economic growth of their countries [2].

The 2019 World Economic Forum recognizes through the "Availability of Scientists in Engineers" 12th pillar – Innovation Capacity – the importance of investing in qualified human resources as part of the nations' development [1]. In 2019, the World Economic Forum Global Competitiveness Index reported Peru in the 65th rank among 141 nations (2018: 63rd rank) [1]. In that year, Peru lost two positions compared to the previous year, and "Innovation Capacity" was one of its weaknesses [3].

The National Superintendence of Higher University Education of Peru states that there are currently 403 doctoral programs nationwide and 4186 applicants to these programs [11]. The described number of doctoral programs in Peru is greater than the number of doctoral programs in other Latin-American countries like Argentina (326 in 2015) or Chile (93 programs with more than four years of accreditation in 2014) [12],[13]. However, a lower scientific production is viewed in published articles in journals indexed to Scopus in Peru compared to the latter countries. Therefore, the investment made to train researchers in Peru could be wasted [2].

Study design
We did a descriptive, cross-sectional study with a quantitative analysis approach of the scientific production of doctors in all areas of science registered in the National Council for Science, Technology and Technological Innovation of Peru. These areas include Agricultural Sciences, Medical and Health Sciences, Natural Sciences, Social Sciences, Humanities, and Engineering and Technology. The latter areas of science are proposed by the Organization for Economic Co-operation and Development.

A search was done in the ORCID platform (https://orcid.org/) to obtain information for each researcher. In this platform, information about the articles published and the academic degree of a researcher is recorded in an individual register called ORCID ID. The Scopus ID is registered in the Virtual Science and Technology Curriculum Vitae and the ORCID ID. Through these platforms, the scientific production information could be verified.

When doctors did not have the Virtual Science and Technology Curriculum Vitae or ORCID ID, a manual search was conducted for publications within journals indexed to Scopus, using a combination of names and surnames to identify scientific articles. Homonymy cases were treated individually. Finally, if the science where the doctorate was obtained could not be found, the corresponding individual was excluded from the analysis.

All searches were conducted in December of 2019.

Ethics
To conduct this study, we used information obtained through a request to public access websites. Hence, approval by an ethics committee was not required to conduct this study since it is a secondary analysis of data obtained from public sources.

We found a difference in the number of publications and H-index (p < 0.05 for both) between areas of science (Table 2). A higher percentage of doctors with at least one publication was found in Natural Sciences (69.13%), Engineering (67.47%), and Health Sciences (67.08%). Regarding gender and university of origin, a discrete predominance among males and doctors with a foreign degree was found concerning the number of articles published and the H-index compared to females and graduates of Peruvian universities, respectively (P < 0.05 for both) (Table 2).

Although investing in the training of doctoral graduates generates multiple benefits that translate into countries' economic growth, doctors must dedicate themselves thoroughly to generating knowledge through research [14],[15]. Only four out of 10 doctors have not had a scientific publication in their life, which is disappointing but understandable in the Peruvian context, characterized by low research investment. Even though the Research Centers' expenditure in research and development in Peru increased from 438 to 518 million soles between 2014 and 2015, it still represented 0.08 percent of the gross domestic product. This expenditure is the lowest at the international level compared to the other members of the Pacific Alliance, whose average is 0.75; or with the United States, whose percentage of research and development spending exceeds two percent of the gross domestic product [2]. The National Superintendency of University Education of Peru and the National System for the Evaluation, Accreditation, and Certification of Educational Quality of Peru have assumed strategies to improve research development in Peruvian universities. These strategies include the requirement of qualified personnel and a budget for financing research projects [16],[17], which represented 46.8% of research and development spending at the national level in 2015 [5]. Similarly, The National Fund for Scientific and Technological Development of Peru (2020) joined forces with World Bank to finance research projects in various strategic areas such as engineering and natural sciences, closing the financing gaps in some universities [18]. This set of efforts could explain the highest number to date of Peruvian universities that entered the   Scimago Institution Ranking, going from 5 to 9 between 2019 and 2020 [19].

The World Economic Forum Global Competitiveness Index suggested that the area with the highest scientific production was engineering among Peruvian doctors. However, according to SciVal, Peru produced 13719 scientific articles from 2013 to 2018, but more than 50% corresponded to the Life Sciences and Medicine category [14]. The latter finding suggests that a large percentage of Peruvian scientific production is made by professionals who do not have a doctoral degree and, depending on their merits, could also be included as scientific researchers [10].

The efforts of the National Superintendency of University Education of Peru – the institution in charge of providing licensing to universities through the evaluation of minimum conditions of functioning – have denied operating licenses to 46 universities and two graduate schools in Peru [20]. The evaluation of the development of university programs is still incomplete. However, the quality may not be the best to judge by the small number of universities in the Scimago Institution Ranking, unlike other countries in the region such as Argentina (25 universities in 2020), Chile (35 universities in 2020), or Colombia (36 universities in 2020) [21]. This difference could explain that doctorates from foreign universities have better scientific production than their counterparts with doctoral degrees from a Peruvian university. In this regard, efforts to repatriate Peruvian researchers to strengthen national research teams could be a positive long-term strategy [22].

Higher scientific production was found in male doctors, which is in line with other studies. A study that addressed various branches of science found that, although the gender gap is narrowing in countries with reduced scientific production (cases in which women predominantly make publications), only a third of the world's publications were made by women, varying by context [23]. These findings are related to personal characteristics or structural problems in research institutions, which include fewer possibilities for women to occupy positions of senior researchers; and, therefore, a lower probability of obtaining funds, leading research projects, or being the first author on scientific articles [23]. A study that included only physicians in Peru found that only four out of 10 were women, a finding that could be explained by gender discrimination [24].

This study has some limitations. First, this research evaluates doctors registered by the National Council for Science, Technology and Technological Innovation of Peru – i.e., doctors who have an individual inclination to research. In this sense, it is expected that the scientific production of all Peruvian doctors could be lower. Second, this study only evaluated articles published in journals indexed in Scopus. Some doctors may have likely published articles that (at the time of data collection for the study) are not indexed. Therefore, this scenario would reduce the number of publications found and analyzed. Third, although the average time since obtaining the degree was seven years and the evaluation time was up to 5 years, this research cannot ensure that all scientific production analyzed was produced after the evaluated doctors obtained their degree. Despite these limitations, we consider that adopting an official registry of doctors and a bibliographic database to evaluate the scientific production of researchers is useful for studying the scientific production of doctoral graduates in Peru.

In conclusion, six out of 10 Peruvian doctors have published a scientific article at some point in their life. The areas of science with the highest production were Natural Sciences, Engineering, and Health Sciences. There is a higher scientific production if the doctor is male and graduated from a foreign university. To the best of our knowledge, this is the first study to evaluate the scientific production of doctoral graduates by area of science through a nationwide sample. Our results suggest that, despite their academic degree, many doctors do not do research. There are probably aspects in Peruvian universities that should be improved, including better opportunities for female researchers. We suggest that this type of research should be replicated in other countries, including those where governmental strategies are applied to increase the number of professionals with doctorates, in order to evaluate the effectiveness of strategies designed to promote scientific production.

Competing interests
The authors declare that they have no conflict of interest.

Funding
This research received no specific grant from any funding agency in the public, commercial, or not-for-profit sectors.

Ethics
An approval by an ethics committee was not required to conduct this study since it is a secondary analysis of data obtained from public sources.

Data sharing statement
Restrictions apply to the availability of the study data. The data that support the findings of this study are available on request from the National Council for Science, Technology and Technological Innovation of Peru and a third party (Scopus). 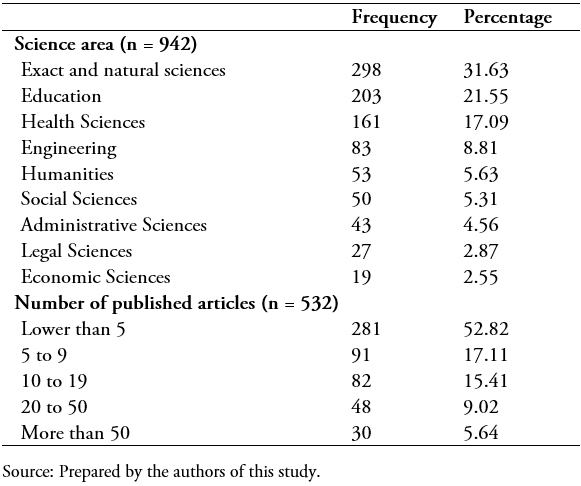