Cyberbullying is the individual or collective aggression towards a victim using electronic means and it is currently a serious problem due to the expansion of social networks [1],[2],[3]. Approximately between 20% and 40% of children and adolescents in developed countries have ever suffered from cyberbullying [1], which can lead to serious consequences on mental health and academic performance of those affected.

In Peru the incipient information available on cyberbullying shows only prevalences at the regional level (mainly in the capital) [4],[5]. Considering this situation, it is sought to establish the national prevalence of cyberbullying, and its associated factors, in Peruvian schoolchildren from 9 to 11 years old thanks to the analysis of data from the National Survey of Social Relations (ENARES).

ENARES collects information on risk situations and social relations from 2013 on a biennial basis. During 2015, it surveyed a representative sample of 1,602 children aged 9 to 11 years across the country. Its database is available to every researcher at http://iinei.inei.gob.pe/microdatos/ .

For this study, schoolchildren who reported having received violent messages in virtual form or having been embarrassed by photos or videos on the Internet or Facebook were considered victims of cyberbullying. A complex sample analysis was performed using Stata v14, with crude odds ratio (OR) and adjusted OR (aOR) with their 95% confidence intervals calculated using a logistic regression model.

The national prevalence of cyberbullying in Peru is lower than previously reported, possibly due to the variability of the population, the instruments used, as well as the limited access to electronic media throughout the territory when compared to the capital [4],[5], or with other latitudes [1].

An association of cyberbullying with female sex and the school and intrafamily environment was also found. The first relationship remains controversial at world level and the second shows that the quality of the relationships in school and in the intrafamily environment may influence the presence of cyberbullying [6], even from such early ages as these results show. In this sense, the elimination of violence towards children at home, dialogue with parents and teachers could influence online risk reduction such as cyberbullying [7].

In conclusion, the existence of a situation of risk for the children of Peruvian schools is revealed, it is necessary to establish individual, family and school preventive measures that can cope with it in this era of modernity and interconnectivity. 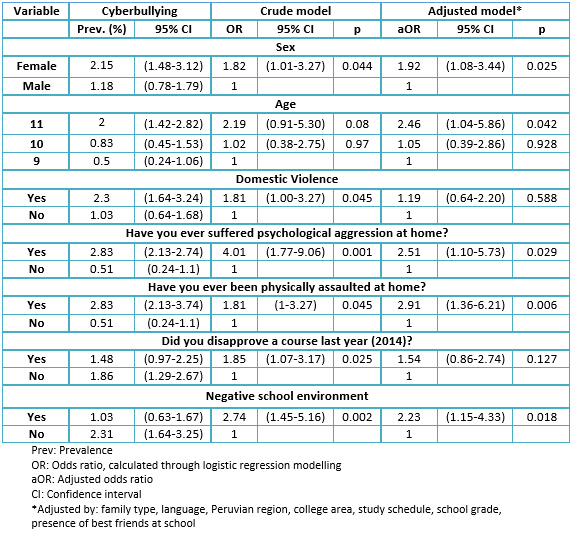