We are heading towards the post-antibiotic era, where the infections that are currently treatable will become deadly [1]. This alarming fact is rapidly expanding worldwide and our country is not on the sidelines of this situation. An example of this are bacteria from the Carbapenem resistant Enterobacteriaceae family, which are associated with high mortality rates due to limited therapeutic options [1],[2]. Despite the multiple strategies used to reduce this problem, the only control measures that have proven effective are proper hand washing, strict contact precautions and the rational use of antimicrobials [3].

Carbapenems, belong to the last line of antimicrobials within the family of beta-lactams. These are used in situations where there is resistance to cephalosporins, aminopenicillins, ureidopenicillins or other commonly used antimicrobials. The carbapenemases are a group of enzymes capable of hydrolyzing this group of antimicrobials

In general terms, beta-lactamases can be classified into two types [4]:

Another classification used is the one of Bush et al. [5], which classifies beta-lactamases according to their functional characteristics, grouping them into four groups:

The objective of this case report is to discuss the rational use of antimicrobials, and the real need to treat asymptomatic urinary tract infections through the presentation of a clinical case. Even when the resistance phenotype tempts the physician to eliminate the microorganism, it must always be kept in mind that this could be part of a microbiota that colonizes the patient, so treating such colonization can lead to the expression of various mechanisms of resistance in microorganisms that naturally do not express them, and that do not cause illness.

A 36-year-old male, from Huancayo – Peru, with a history of spinal cord injury associated with paraplegia, the reason why he undergoes motor kinesiotherapy and uses a Foley catheter intermittently.

In August 28, 2016, the patient was hospitalized after having a urine culture result with development of Klebsiella pneumoniae resistant to carbapenems (see table 2), receiving in this opportunity antimicrobial treatment with imipenem until completing seven days, awaiting assessment by the Infectology team.

At the same time, contact precautions for the patient were established, in addition to the active search for inhospital and intra-domiciliary contacts. During the hospital period this pathogen was not isolated in any other sample (28 beds, wife and child), and the patients who were in contact did not present any acute infection during their hospitalization.

Months later, two control urine cultures were performed on the patient, with an interval of 15 days apart, showing the presence of the same microorganism and resistance phenotype as in previous stages, all these in the absence of urinary symptoms, this was a reason to consider this as a colonization.

Currently, one year after the strain was investigated, the patient is stable, does not have urinary symptoms and continues receiving motor kinesiotherapy for the sequelae of spinal cord injury.

Regarding the microbiological diagnosis, the first sample for urine culture was taken in the emergency service (August 28, 2016), proceeding to the identification and study of antimicrobial susceptibility by automated system Vitek®2 Compact. The strain of Klebsiella pneumoniae with phenotype of resistance to carbapenems was identified.

Diagnostic confirmation of carbapenemase production was carried out through the Kirby Bauer method, according to the Clinical Laboratory Standards Institute 2015 standards and the manual of procedures for the phenotypic detection of resistance mechanisms of the Peruvian microbiology society (2014). Similarly, the Hodge phenotypic test was carried out.

Finally, on September 20, 2016, the strain was sent to the National Institute of Health - Peru, confirming on October 3, 2016 by conventional polymerase chain reaction (PCR) the finding of Carbapenemase producing Klebsiella pneumoniae (KPC).

Carbapenemases are a group of enzymes which have the ability to hydrolyze carbapenemic antibiotics. The carbapenemases of the type KPC (Klebsiella pneumoniae carbapenemase) belong to the class A of Ambler and group 2f of Bush; these enzymes are the most frequently isolated worldwide [5].

Factors for its acquisition include: immunosuppression, previous exposure to broad-spectrum antibiotics, presence of a urinary catheter and prolonged stay in the intensive care unit [8],[9]. Peru has been conducting epidemiological surveillance of antimicrobial resistance for six years [10]. Thus, in 2013 and 2014, the first cases of carabapenemases were reported in the capital of our country (Lima-Peru). After these events, these resistance profiles have not been reported to date in other cities. Unfortunately, the two cases mentioned above were deadly, unlike this case, which represents a colonization by K. pneumoniae producing KPC carbapenemases.

In 2009, the Centers for Disease Control and Prevention (CDC) disseminated strategies for the control of infections caused by carbapenemase-producing enterobacteria. Taking as main points: the isolation of the index case, the implementation of detection protocols for carbapenemic resistant strains and the weekly monitoring of index case contacts [11]. Likewise, a study of patients colonized with by Klebsiella pneumoniae producing KPC carbapenemases reported that the establishment of biosafety measures in hospitals of high prevalence decrease the incidence of this microorganism [12].

Another key point is to evaluate the colonization by carbapenemase producing Klebsiella pneumoniae. One study showed that the duration of colonization lasts less than four weeks in 17% of patients; while 83% of patients remain colonized for more than four weeks with an average duration of 270 days [13]. In the present case, the patient persists colonized by carbapenemase producing Klebsiella pneumoniae after one year.

Regarding the measures for the management of carbapenemase producing Klebisella pneumoniae infections, these are based on two main axes. First of all, it is essential to control and contain the index case, in order to reduce the transmissibility of the microorganism, these control measures consist of strict clinical hand washing, contact precautions and daily disinfection of the surfaces in the unit where the patient is located.

It is important to keep in mind that carbapenemases produced by Klebsiella pneumoniae are plasmidial, so if the control measures are not established early, the risk of plasmidial transfer between different bacterial genera is high, being able to generate the same phenotype of resistance in other microorganisms. which are found either in coinfection in the same patient or in other clinical units, constituting healthcare-associated infections (HAI).

Regarding the pharmacological management, once the strain has been detected, it must be assessed that this is not colonization. Subsequently, already defined that the microorganism is causing disease in the patient, the recommended scheme consists of colistin (polymyxin E) associated with meropenem or imipenem, or the use of ceftazidime-avibactam [15].

Other authors have described total remission of Klebsiella pneumoniae infections in blood cultures with the use of high dose oral fosfomycin (9 g every every 8 hrs) associated with other antibiotics according to antibiogram, with negative blood cultures results after two days of started the scheme [16].

The use of fosfomycin monotherapy at high doses (8 g every 8 hrs) intravenously is another option too, resulting in negative cultures at 24 hours since the start of therapy [17]. It should be noted that the bioavailability of fosfomycin is approximately 30% when administered orally, therefore, the use of oral fosfomycin must be at high doses in order to simulate the recommended intravenous administration dose of 3 g every eight hours. The oral administration of this antimicrobial is due to the fact that many countries don’t have yet intravenous presentation being forced to use other routes for the administration of the drug taking into account their pharmacokinetic parameters.

As mentioned above, keeping in mind the pharmacokinetics of each antimicrobial [18],[19] is crucial in predicting the desired antibiotic concentration in different extravascular compartments. The pharmacokinetic parameters of the antimicrobials indicated in Klebsiella pneumoniae KPC infection are presented in Table 3

Regarding the impact on mortality associated with this pathogen, an associated mortality of 32.1% was observed in a hospital in the United States for Klebsiella pneumoniae type KPC, compared to 9.9% for sensitive strains [20]. There are no studies addressing mortality by KPC in our country, due to the low incidence reported.

In retrospective, detailing the clinical history, the irrational use of antimicrobials was found as risk factors for the acquisition of this strain, as well as the chronic use of intermittent catheterization by Foley catheter. No other data were obtained that contribute to the acquisition of a KPC strain.

Unfortunately until now, our hospital does not have specific regulations for the management of these cases. Our action responded to the alarming fact of isolating a multidrug-resistant germ and its probable repercussion within our hospital.

The risk factors involved in the acquisition of carbapenemic-resistant strains in the present clinical case were the indiscriminate use of antimicrobials in previous hospitalizations together with the chronic use of intermittent Foley catheter.

Based on the information presented in the case, is a priority the creation of specific protocols for the management of cases of enterobacteria resistant to carbapenems, considering that these antimicrobials are the last line in the management of serious infections.

Active surveillance by rectal swabs in hospitalized patients has given favorable results for the early detection of XDR resistance phenotypes, whether they are extended-spectrum beta-lactamases (ESBLs) such as KPC-type carbapenemase.

The use of colistin associated with meropenem or imipenem is indicated as long as the organism is causing disease, and is not part of the patient's microbiota as colonization. Considering that 83% of patients remain colonized for more than four weeks. This translates into not initiating antimicrobial chemotherapy in patients with asymptomatic urinary tract infections.

The use of fosfomycin in cases of Klebsiella pneumoniae infections resistant to carbapenems is shown as a good alternative when the first line schemes have been refractory.

The unnecessary taking of urine cultures tends to cause confusion regarding the management of patients with asymptomatic bacteriuria, tempting the clinician to indicate antimicrobial schemes to microorganisms that are part of the patient's microbiota, thus generating positive selection and the expression of mechanisms of resistance.

Statement of conflicts of interest
The authors have completed the declaration of conflicts of interest form of the ICMJE, and declare not having received financing for the realization of the report; not have financial relationships with organizations that could have interests in the published article, in the last three years; and not having other relationships or activities that could influence the published article. The forms can be requested by contacting the responsible author or the editorial direction of the Journal.

Financing
The authors declare that there were no sources of external financing.

Acknowledgement
To the National Institute of Health - Peru, for the collaboration in the confirmation of the strain. 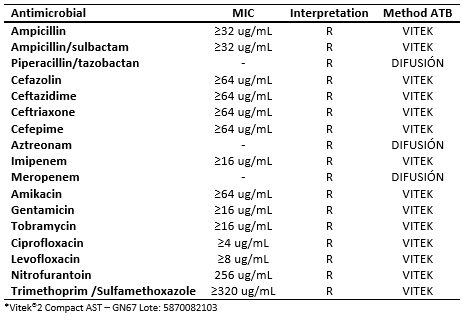 Guidance for Control of Infections with Carbapenem-Resistant or Carbapenemase-Producing Enterobacteriaceae in Acute Care Facilities. Cdc.gov. 2018 [on line]. | Link |