Elephantiasis nostras verrucosa, a rare manifestation of Kaposi’s sarcoma, is a progressive cutaneous hypertrophy caused by chronic non-filarial lymphedema secondary to obstruction of the lymphatic system that can lead to severe disfigurement of parts of the body that have gravity-dependent blood flow, due to edema, fibrosis, and hyperkeratosis, especially lower extremities. Among the various conditions that can induce chronic lymphedema are tumors, trauma, radiotherapy, obesity, hypothyroidism, chronic venous stasis, and AIDS-related Kaposi’s sarcoma. Kaposi’s sarcoma is a vascular tumor associated with the presence of human gammaherpesvirus 8 that is predominantly cutaneous, locally aggressive, with metastasis, and is associated with the production of factors that favor inflammation, lymphatic obstruction, and lymphedema.

The term "elephantiasis" has traditionally mainly been used when referring to limited to cutaneous changes caused by lymphatic filariasis transmitted by human blood-sucking mosquitoes carrying filarial nematodes (Wuchereria bancrofti, in 90% of cases, as well as Brugia malayiandB. timori)[2]. Elephantiasis nostras verrucosa is a progressive cutaneous hypertrophy resulting from chronic non-filarial lymphedema secondary to obstruction of the lymphatic system. It can lead to severe disfigurement of parts of the body with gravity-dependent blood flow, due to edema, fibrosis, and hyperkeratosis. Among the various conditions that can induce chronic lymphedema are tumors, trauma, radiotherapy, obesity, hypothyroidism, chronic venous stasis, and AIDS-related Kaposi’s sarcoma.Kaposi's sarcoma is a heterogeneous group of neoplasms classified by clinical and epidemiological characteristics into four types: classic, endemic, associated with transplants, and epidemic (AIDS-related). The incidence of Kaposi's sarcoma in men who have sex with men and have been diagnosed with AIDS ranges from 21% to 40%; the incidence in pediatric patients is 1.6%. These neoplasms are characterized by aggressive behavior, lack of a specific cutaneous location, and frequent effect on the gastrointestinal tract, lungs, lymph nodes, and other organs[1]. This report describes a case of elephantiasis nostras verrucosa secondary to AIDS-related Kaposi's sarcoma. Although this condition is rare, it has been reported in Chile, so it must be considered in the differential diagnosis[3],[4],[5].

A 63-year-old male patient, 1.73 meters tall and 70 kilograms in weight, with AIDS-related Kaposi's sarcoma, diagnosed nine years earlier and undergoing antiretroviral treatment, presented with a skin condition with a three-year history of evolution characterized by the appearance of papules that converged into plaques, located on the lower-right extremity. At the time of development of the dermatological disorder (June 2015), there was a median CD4 count of 364 cells/mm3and a viral load of 124 copies/ml. Antiretroviral treatment with didanosine, lamivudine, and efavirenz was started in September 2006. In July 2007, the treatment was simplified to lamivudine/zidovudine plus efavirenz. In September 2011, due to lipodystrophy and neuropathy, the treatment was changed again, to abacavir/lamivudine plus efavirenz. In October 2014, due to intolerance, the treatment was changed once more, to abacavir/lamivudine, atazanavir, and ritonavir; this was the last treatment performed. At the time of the October 2014 examination, there was diffuse thickening of the lower-right limb from the ankle to the knee, forming a large constrictive plaque with a crust similar to a wart that surrounded the entire leg, hyperkeratosis, violet areas, and erythematous papules on its periphery, both distally and proximally (Figure 1). General blood tests were performed to measure blood count and erythrosedimentation rate, biochemical and liver profile, renal function, and C-reactive protein; no significant changes were found. The tissue culture for bacteria and mycobacteria did not reveal the presence of pathogens that could explain the hypertrophy, and the polymerase chain reaction was negative for the presence of the human papillomavirus. Four samples were taken from the proximal and distal peripheral region of the lesion and two samples were taken from the center. The samples were described as dermis infiltrated by a population of isolated fused cells arranged in short fascicles between collagen fibers and surrounding preexisting dermal vessels, delimiting clefts, with extravasation of erythrocytes, hyperkeratosis, and acanthosis compatible with Kaposi's sarcoma (Figure 2). Immunohistochemistry showed the presence of human gammaherpesvirus 8(Figure 3).

Figure 1. Hypertrophy (thickening) of the lower limb from large, constricting, crusted plaque with a warty appearance and (in more proximal parts) violaceous lesions.

AIDS-related Kaposi's sarcoma is one of the conditions that can produce chronic lymphedema. Kaposi's sarcoma is a malignant tumor of endothelial cells, with four different, recognized clinical presentations, all associated with human gammaherpesvirus 8. This virus has human homologous regulatory genes that stimulate inflammation, cell proliferation, and angiogenesis, and this phenomenon becomes amplified by the HIV Tat gene, which stimulates the production of cytokines and angiogenic factors. In addition, lymphatic infection with human gammaherpesvirus 8 leads to inflammation and obstruction, favoring the appearance of lymphedema. The involvement of vessels and deep lymph nodes by confluent masses of Kaposi's sarcoma favors the appearance of massive lymphedema. Due to the high interstitial protein concentration that retains fluid in the connective tissue, there is chronic inflammation and synthesis of growth factors (bFGF, VEGF, and PGF), which lead to fibrosis and hyperkeratosis, and a hyperkeratotic variant of Kaposi's sarcoma can develop. Hyperkeratotic variants of Kaposi's sarcoma, which are uncommon, are characterized clinically by papules that coalesce into extensive constrictive plaques that have a warty or cobbled appearance and alter the functional capacity of the limb[6],[7],[8].

Histologically,elephantiasis nostras verrucosa is characterized by pseudoepitheliomatous hyperplasia. Other histological features observed during the early stages of the disease include dilated lymphatic channels, loss of sweat glands, and dermal papillae. During the last stages, there is fragmentation and separation of the elastic fibers of the dermis, with abundant fibrous tissue in the dermis, subcutaneous tissues, and walls of the lymphatic vessels. Adipose tissue is observed as edematous[9].

Diagnosis of elephantiasis nostras verrucosa is based mainly on patient history, physical examination, and the presence of skin lesions typical of the condition. Identification of the causes of this type of secondary lymphedema may require a skin biopsy and use of various imaging techniques, including computed tomography and magnetic resonance imaging. Differential diagnoses include venous stasis dermatitis, lipodermatosclerosis, lymphatic filariasis, chromoblastomycosis, Hennekam syndrome, papular mucinosis (lichen myxedematosus), and pretibial myxedema[9],[10].

Treatment of underlying causes is crucial in the management of elephantiasis nostras verrucosa. The initial therapy should be directed at alleviating lymphedema with massage, multilayer inelastic lymphedema bandaging, and compression stockings, after confirming adequate vascular perfusion and control of any infection. More intensive therapy includes decongestive lymphatic therapy, a form of complex physical therapy that includes skin hygiene, limb compression, and exercise. Success has also been reported with external sequential pneumatic compression devices[11].

In this case, antiretroviral therapy was very useful. In other cases, if no response is obtained, systemic cytotoxic chemotherapy can be initiated, using liposomal preparations of anthracyclines (liposomal doxorubicin) as the first-line treatment. Lymphostasis can be managed conservatively, using compression bandages and mechanical massage, to reduce the circumference of the limb and improve skin changes associated with elephantiasis nostras verrucosa. Diuretics and systemic antibiotics may be necessary to reduce edema and treat superinfection. The efficacy of antibiotics in the control of chronic colonization in elephantiasis nostras verrucosa has not yet been established. Hyperkeratosis can be treated with keratolytic, topical, or systemic retinoids. Surgical intervention can be considered in recalcitrant cases when the response to medical treatment is poor[9],[10],[12].

Elephantiasis nostras verrucosa may be a manifestation of various pathological processes that lead to obstruction of lymphatic drainage, including those related to Kaposi’s sarcoma, a group of neoplasms associated with human gammaherpesvirus 8, and can cause subsequent deformity. Therefore, clinicians should remember the various pathophysiological mechanisms through which human gammaherpesvirus 8can lead to the formation of elephantiasis nostras verrucosa, and consider this type of progressive hypertrophy as a potential albeit rare initial manifestation of any of the four types of Kaposi’s sarcoma, including the epidemic (AIDS-related) form of the disease, especially when evaluating HIV patients.

Ethics
The informed consent requested by Medwavehas been signed by the patient and a copy of the signed form forwarded to the editorial board of the Journal.

Funding statement
The authors declare that there were no external sources of funding.

Note from the editors
The present article was originally submitted in English and has been copyedited by the Journal. 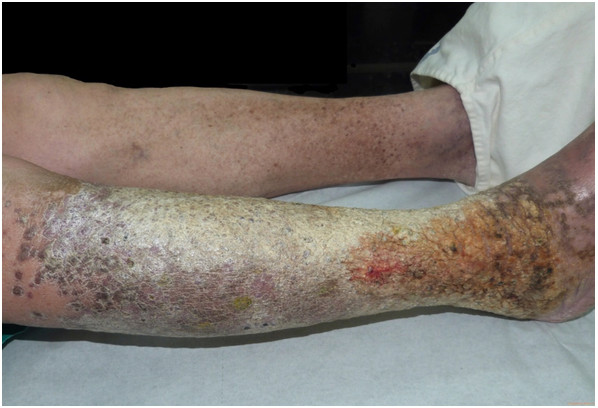 Figure 1. Hypertrophy (thickening) of the lower limb from large, constricting, crusted plaque with a warty appearance and (in more proximal parts) violaceous lesions. 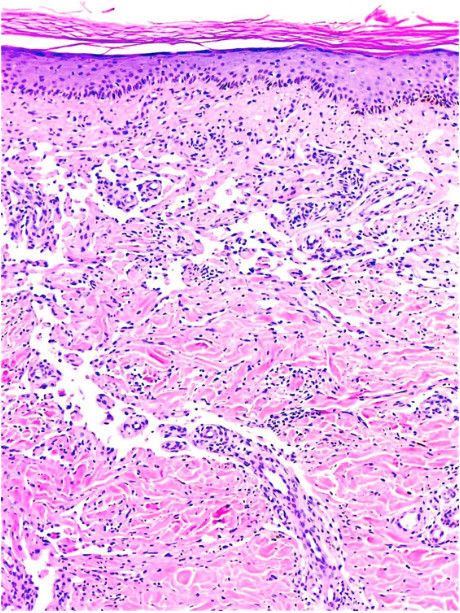 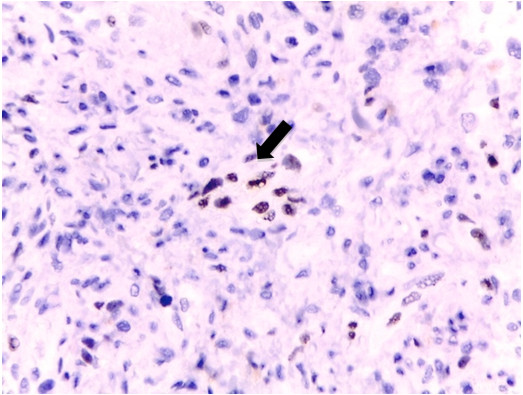 Elephantiasis nostras verrucosa, a rare manifestation of Kaposi’s sarcoma, is a progressive cutaneous hypertrophy caused by chronic non-filarial lymphedema secondary to obstruction of the lymphatic system that can lead to severe disfigurement of parts of the body that have gravity-dependent blood flow, due to edema, fibrosis, and hyperkeratosis, especially lower extremities. Among the various conditions that can induce chronic lymphedema are tumors, trauma, radiotherapy, obesity, hypothyroidism, chronic venous stasis, and AIDS-related Kaposi’s sarcoma. Kaposi’s sarcoma is a vascular tumor associated with the presence of human gammaherpesvirus 8 that is predominantly cutaneous, locally aggressive, with metastasis, and is associated with the production of factors that favor inflammation, lymphatic obstruction, and lymphedema.