Introduction
Breast cancer is the second most prevalent neoplasm in women after cervical cancer in Peru. It is also the third leading cause of female mortality. The implementation of screening programs using mammography has led to a considerable reduction in the mortality of this cancer in high-income countries.

Objectives
To analyze the factors associated with mammography use in Peruvian women between the ages of 40 and 59.

Methods
Secondary analysis of the 2018 Demographic and Health Survey in Peru. The national representative sample consisted of 4822 women between the ages of 40 and 59. The main outcome was the use of mammography during the last 24 months, with which we calculated percentages and crude and adjusted prevalence ratios (PR).

Conclusions
The use of mammography as a preventive examination for breast cancer in Peru is still low compared to other countries. The association of mammography with the better-off quintile shows the inequalities of access to preventive health in the country.

Globally, breast cancer is the most frequent neoplasm in women, attributing approximately 24% of the total of all neoplasms in females[1]. In Peru, breast cancer is the second most prevalent neoplasm in women after cervical cancer, with an estimated annual incidence of 26.35 new cases per 100 000 inhabitants, and it is also the third leading neoplastic cause of mortality in women[2].

It has been estimated that mortality by breast cancer has reduced by 13 to 33% due to the implementation of mammogram screening programs worldwide[3],[4]. In high-income countries, the five-year survival rate for breast cancer increased to more than 80% during the period 1995 to 2009, with breast cancer screening programs being attributed as one of the largest determinants of this increase[5]. However, the high cost of these programs means that their implementation in low- and middle-income countries is often deferred, despite their cost-effectiveness[6].

The World Health Survey reported that the rate of mammography in low-income countries was approximately 2.2% in the five years prior to the survey[7], with this rate for the same period exceeding 60% in high-income countries[8]. These notable differences are thought to be determined in part by the high costs and limited access to these exams in low resource settings[9]. In Peru, in 2017, the Demographic and Family Health Survey (Encuesta Demográfica y de Salud Familiar [ENDES]) reported that 17.1% of women between 40 and 59 years had undergone mammograms during the last 24 months[10].

Knowledge of the factors associated with mammography is a vital aspect of planning large scale prevention programs. Previous studies have suggested that non-performance of mammograms was associated with lifestyle factors such as alcoholism, poor physical activity and smoking[11],[12],[13], as well as sociodemographic factors, such as low levels of education, low incomes and immigration status[6],[14],[15]. Quantifying these factors can contribute to proper planning and prioritization of preventive programs, in addition to helping to overcome the barriers to their implementation.

Although in Peru the ENDES provides descriptive information annually about the use of mammography services in women between 40 and 59 years, no information is available for analyzing and evaluating the characteristics related to greater or lesser use of mammography in this population group. Therefore, the objective of the present study was to analyze the bio-socio-demographic factors associated with the performance of mammograms in Peruvian women between 40 and 59 years of age in 2018.

Design and study population
A secondary analysis of the ENDES survey 2018 was executed by the National Institute of Statistics and Information Technology of Peru (INEI) with the aim of obtaining information on health issues of Peruvian inhabitants on life habits, maternal and child health, use of health services, communicable and chronic diseases, among others[16]. The sampling and analysis unit were households and people residing at home, respectively. More details on the sample design, procedures, and data collection can be found in the ENDES technical report.

A total of 33 794 inhabitants over the age of 15 with complete data were included in the 2018 ENDES health questionnaire. The sample selected for this study consisted of women aged 40 to 59.

Variables and measurements
The main variable of this study was the performance of mammography up to 24 months prior to the survey. The independent variables considered in the analysis were: age groups (grouped in quinquennials), educational level (without education or initial/primary/secondary/higher), wealth quintile (grouped into five quintiles), geographical domain (field, village, small city, capital), marital status (unmarried/married or cohabiting/other), smoking (yes/no) assessed by cigarette consumption in the last 30 days, self-report of diabetes diagnosis by a doctor (yes/no), nutritional status according to body mass index of overweight/obesity (<25/25 or more), and depression (yes/no) evaluated by a score of 10 or more points in the Patient Health Questionnaire 9 (PHQ-9) scale. Most variables were included using the Andersen service access model as the reference[17],[18].

The software Stata 14.2 (Stata Corp, College Station, TX, US) was used for data analysis. Means and standard deviations were used to evaluate the quantitative variables, and weighted proportions were used for the categorical variables. Evaluation of the association among the study variables was performed using the chi-square test. The association between mammography and independent variables was then measured using generalized linear models (GLM) of the Poisson family with raw and adjusted link function (log), reporting prevalence ratios (PR) together with their 95% confidence intervals (95% CI). The inclusion of variables in the adjusted model took into account the variables that were significant in the crude analysis. All analyses considered the complex sampling and weighting factor of the ENDES, considering a p-value of less than 0.05 as significant.

Ethical considerations
The conduct of the study did not require the approval of an ethics committee because it is an analysis of aggregated secondary data that is in the public domain and does not allow the identification of the participants assessed. The ENDES 2018 databases can be freely obtained and downloaded from the INEI web portal.

The total sample analyzed was composed of 4822 women between 40 and 59 years of age, with a mean age of 48.1 years. Of these, 16.9% reported having had a mammogram during the two years prior to the survey. A comparatively high proportion was also observed in women with higher education (30.1%), greater wealth quintile (34.2%), and those from a large city (26.9%). Smoking, previous diagnosis of diabetes or obesity were not related to a higher prevalence of mammography use. The remaining characteristics of the women and the percentages of mammography in the last two years are shown in Table 1.

Table 1. Characteristics of the women included in the study (N=4822).

The same variables were used to construct the crude and adjusted models for the estimation of the PRs of mammography (Table 2). In the bivariate analysis, the variables age group, educational level, wealth quintile, geographical domain, and smoking were significantly associated with the use of mammograms. Of these, the variables showing the greatest association in all their categories were educational level, the wealth quintile, and geographic domain (p < 0.001). The PR of the highest wealth category (quintile 5) in the multivariate wealth quintile analysis was 5.75 (95% CI: 2.97 to 11.15; p < 0.001). Similarly, the age of women was associated with increased use of mammograms with an adjusted PR of 1.83 (95% CI: 1.31 to 2.55). The other variables showed no association in the multivariate analysis.

The proportion of Peruvian women between 40 and 59 years who had had a mammogram in the 24 months prior to the survey and the associated factors were evaluated. We found that in this population group, 16.9% (95% CI: 15.0 to 18.8) had undergone mammography before the ENDES 2018 survey. This figure was not statistically different from the results of the ENDES 2014 survey (18.7%)[10].

In Peru, two out of every ten women in the age group who require mammography have done so in the last two years. However, this figure is comparatively low compared to previous studies in other countries in which 54.5 to 80. 0% of women had undergone mammography in the previous 24 months[19],[20]. The reasons for the difference may be due to the higher age cut-points used (up to 69 years) with which higher percentages of performing this test would be expected. On the other hand, the high percentages of mammography in high-income countries could be due to the more developed health strategies of prevention of breast cancer implemented as part of the health systems and individual behaviors or awareness towards better preventive practices in health.

We also found that the percentages of mammography were higher among women with a higher educational level and wealth quintile compared to those with a lower educational level and wealth quintile. Furthermore, the multivariate analysis showed that the higher the wealth quintile, the greater the probability of performing mammography. In this regard, previous studies have reported that socioeconomic level is a factor associated with higher rates of use of mammography services[21],[22],[23]. In Peru, 55% of the mammography equipment available can be found in the private sector[24] for women willing to pay for this service. Thus, increased economic resources appear to be the main and major determinant of the use of mammography services according to our findings, being necessary to improve the offer of this service in the public sector where the majority of the population is served, as well as to provide financial protection for women with lower resources.

On the other hand, we found no association among the nutritional status of women, the presence of comorbidities, smoking, and the geographical domain of residence with a higher percentage of mammography. Previous studies have shown varying results concerning the association between smoking and mammography[11],[12],[25]. However, regarding nutritional status, Lagerlund and col. reported an association between the presence of obesity and the use of mammograms (aOR = 1.14)[12]. Apparently, these associated characteristics were specific for each country in which they had been measured as they show great heterogeneity throughout the literature. Prospective population-based studies are necessary to elucidate the relationship of these variables with the use of mammography.

Among the main limitations of the study it should be mentioned that since it was a cross-sectional study, causality could not be established among the variables of interest. Likewise, there could be a lack of precision of the data as it is a study of secondary data. However, ENDES is a population-based survey that has quality control procedures and is designed to study health issues in the format of demographic and health surveys[26]. It is currently the only official source of population information that collects information on cancer prevention measures in Peruvian women.

Considering the different characteristics of breast cancer screening and prevention programs in each country, the findings presented make it difficult to compare them with other population-based studies. Specifically, in Peru, fragmentation of the health system makes the development and implementation of national prevention programs more complex.

The present study highlights the latent need to prioritize cancer prevention plans such as mammograms, taking into account the limited access to this procedure determined by purchasing power gaps.

It is necessary to implement breast cancer screening strategies to reach population groups at risk, especially in Peruvian women who fail to perform periodic mammograms for socioeconomic or geographic reasons.

Acknowledgments
The authors would like to thank the Instituto Nacional de Estadística e Informática of Peru for making the database available. The datasets are available at Microdatos INEI: http://iinei.inei.gob.pe/microdatos/

Funding
The authors declare that there were no external sources of funding. 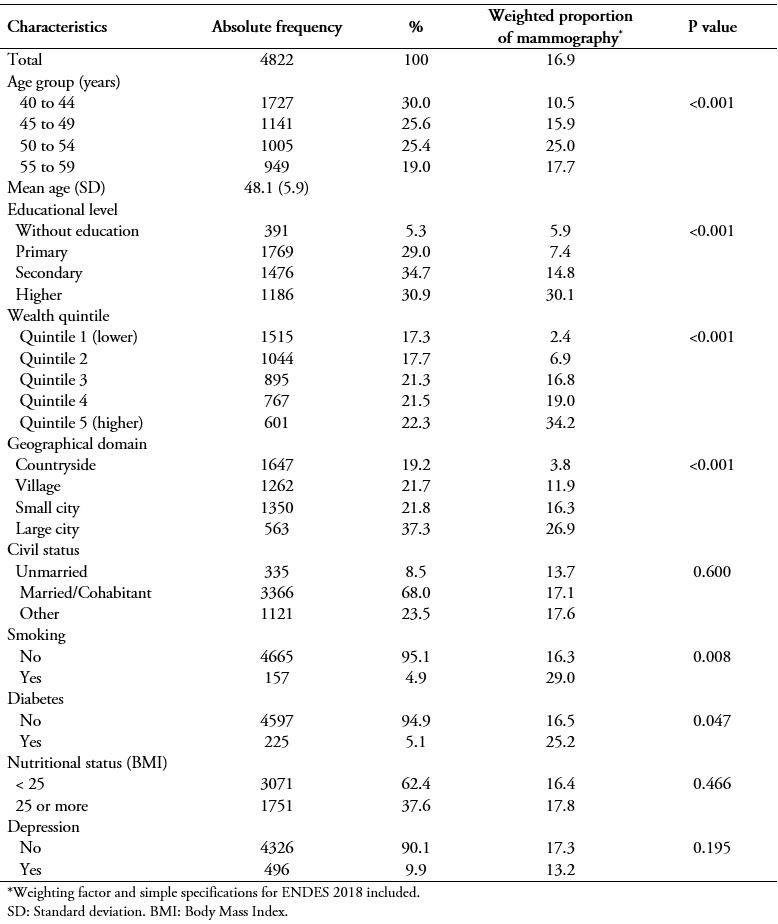 Table 1. Characteristics of the women included in the study (N=4822). 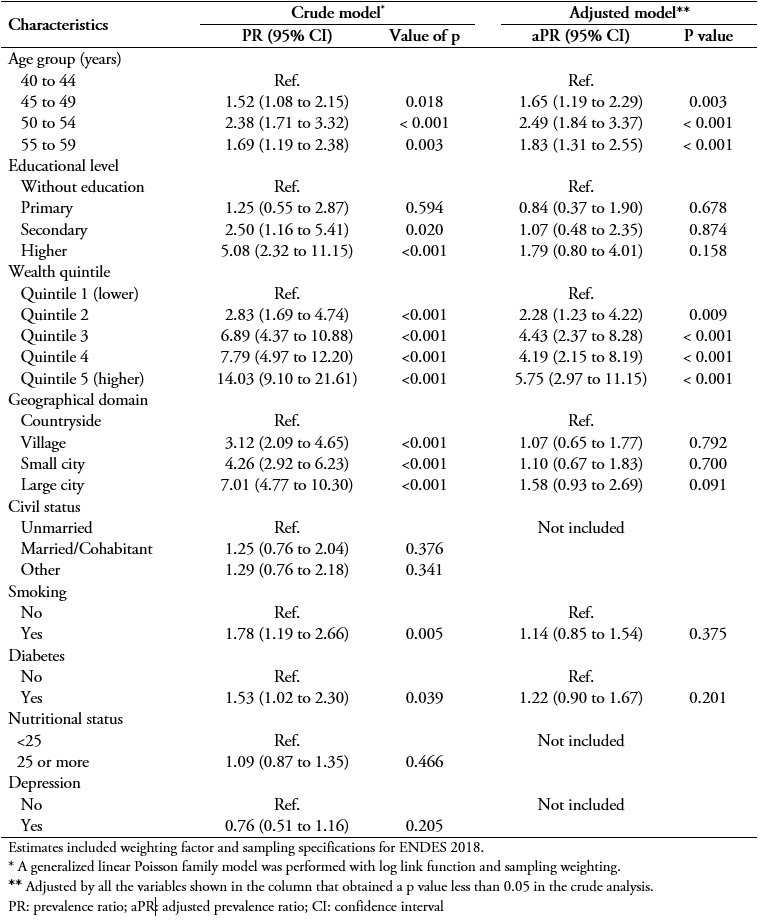