Objective
To determine if older adults in Chile have higher rates of traffic incidents, resulting in death or injury when compared to younger adults between 2008 and 2017.

Methods
The databases of the National Traffic Safety Commission of the last ten years and the data of inhabitants according to the projections made by the National Statistics Institute were used. Effect measures and 95% confidence intervals were calculated.

Conclusions
Older adults presented a greater vulnerability to death by traffic accidents. Substantial differences are seen across different regions. Future research should address the characteristics of the users, the strategies that could help them to have better interaction, and promote health with a focus on road safety for older people.

Road traffic is the movement of pedestrians, animals, and vehicles that traverse public roads[1]. Traffic accidents occur when such a movement is altered, causing damages and associated costs that may be material, health-related, administrative, and human in nature[2]. At the global level, traffic accidents are the eighth major cause of death in people of all ages and are sixth in terms of years of life potentially lost[3]. In countries like Chile, traffic accidents have an economic impact of 2% on the gross domestic product. Additionally, it is known that suffering a traffic accident reduces an individual’s quality of life; however, older people are even more vulnerable than other age groups[4]. Chile, in particular, has very low accident rates within the Americas. Nevertheless, the country still presents a rate of 12.5 deaths per 100 000 inhabitants, the highest among members of the Organization for Economic Cooperation and Development[5].

Demographic changes can alter the amount of older people participating in road traffic. It is known that as individuals age, traveling as a pedestrian becomes more difficult due to decreased mobility. Moreover, cognitive characteristics make crossing the street more dangerous, and traffic signals allocate insufficient time to cross, being that older adults have decreased walking speed[6],[7],[8]. These changes also affect driving, as the visual field is more restricted, which makes complex traffic conditions challenging to face. Therefore, older people tend to travel fewer kilometers and drive less at night until they stop driving altogether.

People aged 60 or older were considered as older people. The ages of adults ranged from 18 to 59. Data associated with the population for both age groups were extracted from the National Statistics Institute from 2002 to 2012 and projected until 2020.

Data on the number of fatalities and injured in traffic accidents

The database of traffic accidents in the senior and adult population was requested from the Traffic Safety National Commission (CONASET, in Spanish) via e-mail. In this way, all traffic accidents between 2008 and 2017 were gathered, extracting the total number of accidents, death toll and number of injured at the regional and national level, considering all types of participation, i.e., driver, passenger o pedestrian in a single category. Simultaneously, data on cause and type was obtained. Major and minor injuries were grouped into a single category.

Figure 1. Calculation of measures of estimation of effect.

This research was presented to the Ethics Committee of Pontificia Universidad Católica de Chile. Nevertheless, as it did not pertain to the category of analysis of public database records, the study did not require further considerations from an ethical point of view, and thus, the revision was exempted.

Table 1. Absolute numbers for traffic accidents in older people in Chile between 2008 and 2017.

Between the years 2008 and 2017, the elderly had approximately half the rate of suffering a traffic accident resulting in injury than non-elderly adults (rate ratio: 0.5; 95% confidence interval: 0.5 to 0.6 and rate ratio: 0.6; 95% confidence interval: 0.6 to 0.6). However, older adults showed 1.3 times the traffic accident mortality rate than other adults (Table 2).

Meanwhile, the death rate varied across regions, ranging from 0.9 for the Antofagasta region to almost double for the Arica region (rate ratio: 1.8; 95% confidence interval: 1.4 to 2.3). The Tarapacá, Antofagasta, Atacama, Coquimbo, Los Lagos, and Aysén regions did not present differences between older adults and other adults in terms of the death rate. Conversely, in the other nine regions, older people exhibited a higher rate of death in traffic accidents than other adults.

Table 2. Occurrence, death and injuries during traffic accidents for older adults between 2008 and 2017 in Chile.

Causes and types of traffic accidents

Table 3. Occurrence, death, and injuries during traffic accidents for older people by cause and type between 2008 and 2017 in Chile.

Older people in Chile have a 0.5 rate ratio of suffering a traffic accident and a 0.6 rate ratio of being injured in a traffic accident. Differences in their interaction with traffic could explain this. Older adults substitute driving cars with public transportation; they increase their participation as pedestrians, reduce the distance traveled by car, avoid complex transit conditions, interact with road traffic during the day, and the elderly could be less aggressive[9],[10],[11]. Nevertheless, older people were found to have 1.3 times the rate of death due to traffic accidents than other adults, which is similar to the rates of other countries, where the elderly have higher death rates than younger age groups[12]. Older adults probably have more chances of dying due to their fragility[13], which is also the case in work-related accidents in which they are more likely to suffer fatal accidents than young people[14].

The difference in the death rate ratio across regions could be explained by the geographical or socio-economic conditions of each region. Previous studies indicate that the proportion of older adults involved in traffic accidents varies depending on the geographical or socio-economic conditions of different countries[15]. This could represent an association within the differences observed across regions since road safety strategies rely on municipalities rather than on centralized institutions at the national level[16]. In this way, resource inequality across regions in Chile could have consequences on accident rate, since insufficient funding not only leads to bad quality or poor road infrastructure, but also to other problems such as the lack of or precarity of health systems in dealing with emergencies or treating people involved in a traffic accident. Therefore, these factors are important and should be considered[17].

Cause and types of traffic accidents

No differences were found in the rate ratio for suffering a traffic accident due to the pedestrian’s recklessness. This stands in contradiction to the literature, which describes older people as pedestrians with more conservative behaviors when crossing the street, who use more authorized crossing points and cause less conflict with vehicles than their younger counterparts[18]. Nevertheless, the decrease in the physical, cognitive and sensory capacities of older people could explain these differences, since, even after training in safe-street crossing, this age group has seen no improvements in this regard[19],[20].

Pedestrian recklessness only affects pedestrians, and our analysis confirms that both older people and adults would be equally reckless. However, when involved in traffic accidents due to pedestrian recklessness, the death rate for older people was almost three times the rate of adults and 1.5 times for accidents resulting in injuries. Thus, attention should be paid to policies for protecting the most vulnerable as established by international and national policies[21]. The short duration of traffic light signals and sidewalk and road conditions are some of the risk factors for older adults[7],[14],[23]. Consequently, pedestrian recklessness is the cause of most casualties in traffic accidents, which is in agreement with other results indicating that frequent victims of traffic accidents are older people hit by a vehicle[18].

In the case of collisions and crashes, older adults show approximately half the rate of suffering this type of accident and being injured than adults. However, no differences were found in the rate ratio of death in a collision, but older people did present a 0.6 rate ratio of death by a car crash. The reduction in the rate for suffering a collision or car crash could be because, in more than half of these accidents, older people were involved as drivers; thus, the characteristics attributed to older adults when driving mentioned in some studies, which is to say, slower and more careful driving, could be an influencing factor[23].

The third limitation corresponds to the age cut-off point. Although this study considered the age set by law for considering a person as an older adult, many studies consider people over 65 as older adults[27].

This study confirms the vulnerability of the elderly in Chile. Therefore, incorporating the importance of traffic interactions to the mobility of this age group is fundamental from a public health perspective that considers the different relevant actors and institutions. An example is the RedActiva initiative, which seeks to promote the mobility of older people through the use of a wrist band to facilitate payment in public transportation, as well as to increase the timing of traffic light signals for safe street crossing, among other functions[28]. Thus, it is imperative to continue researching to develop health promotion strategies focused on the prevention of traffic accidents involving older adults and oriented to the development of friendly cities. Finally, when speaking of traffic accidents, which involve the health of the population, multisector policies, and programs for reducing the exposure to these risk factors are necessary.

Funding
The authors of this study declare that there was no external funding.

Conflict of interest
The authors completed the conflict of interest statement form of the International Committee of Medical Journal Editors (ICMJE). They declare to have not received funding for conducting the study, not having financial ties with organizations that might have interests on the article published in the last three years, and not having relationships to activities that might influence the article published. The forms may be requested by contacting the corresponding author or the editorial office of the Journal.

From the editors
The original version of this manuscript was submitted in Spanish. This English version was submitted by the authors and has been copyedited by the Journal.

Figure 1. Calculation of measures of estimation of effect.

Table 1. Absolute numbers for traffic accidents in older people in Chile between 2008 and 2017. 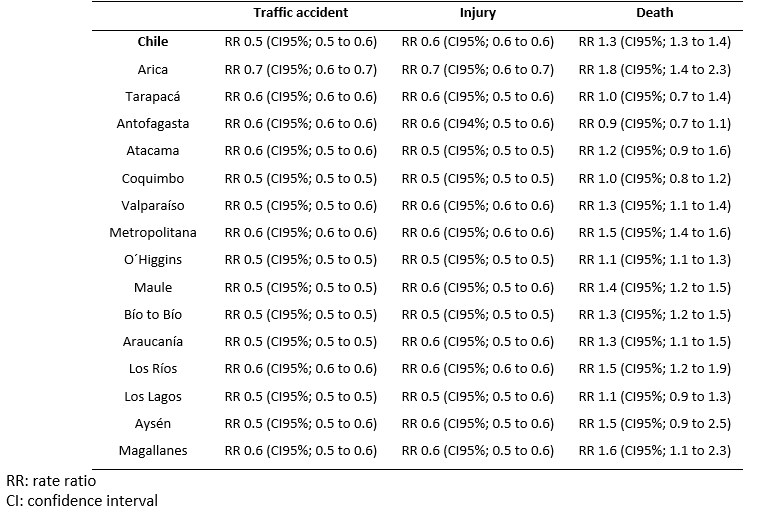 Table 2. Occurrence, death and injuries during traffic accidents for older adults between 2008 and 2017 in Chile. 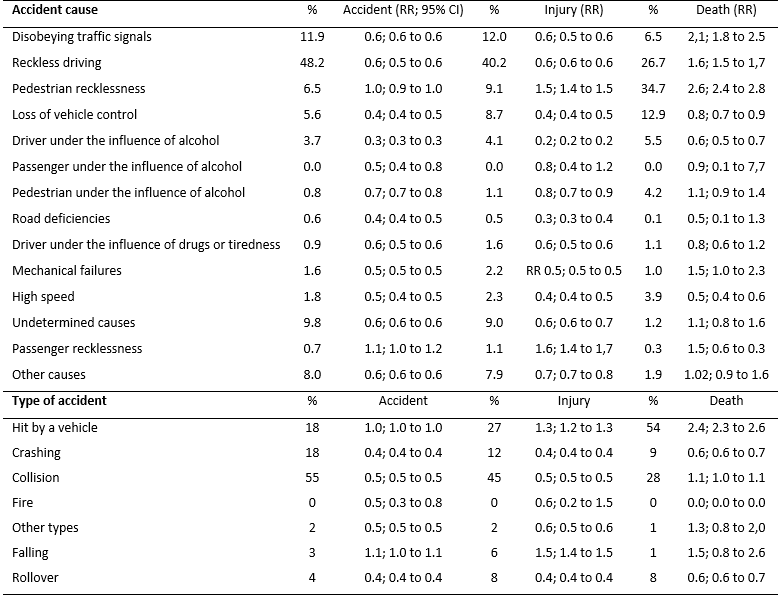 Table 3. Occurrence, death, and injuries during traffic accidents for older people by cause and type between 2008 and 2017 in Chile.