The Latin American Federation of Scientific Societies of Medical Students (FELSOCEM) was founded in 1986, 30 years ago in Valparaiso, Chile, at the First South American Scientific Congress of Medical Students. It was initially founded as an international society that later became the current federation. This moment marked a milestone in the participation of medical students in international events, multicentric projects and scientific publications [1].

Each year, the International Scientific Congress (ICC) organized by FELSOCEM is the most important scientific event of medical students in Latin America. Until 2016, it has been held in thirty-one opportunities, by scientific societies in different Latin American countries, which postulate to be host of the event two years in advance. In these events, academic activities, research papers competitions, international meetings of scientific journals of the health sciences [2] and the Ordinary General Assembly are held where the guidelines for scientific, academic and social projection activities of the federation are discussed.

In addition, different medical societies of students also conduct their own scientific events, providing to the medical students the opportunity to participate in national congresses at the height of international events. Such is the case of the National Scientific Congress (CCN) of the Peruvian Scientific Society of Medical Student (SOCIMEP) and the Colombian Student Congress of Medical Research (CECIM) organized by the Association of Scientific Societies of Medical Students of Colombia (ASCEMCOL) [3]. These were the pioneers of this initiative, motivating the accomplishment of the congresses in local scientific societies in Honduras, Panama and Paraguay.

Table 1 summarizes the characteristics of the main student scientific congresses that are regularly held in twelve Latin American countries, most of them organized by scientific societies belonging to FELSOCEM. Although these congresses annually bring together a significant number of physicians in training, many of these opportunities are unknown by a large population of students, especially those who are not involved in activities carried out by scientific societies. 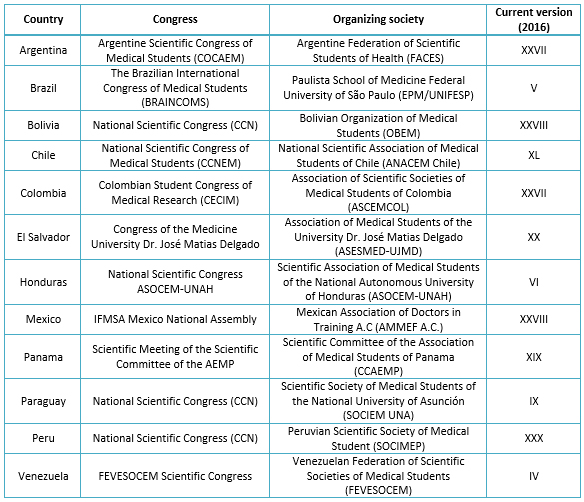 The impact of scientific societies on the promotion of scientific culture from the undergraduate level is undeniable. While there are limitations and difficulties [4],[5], it is necessary for medical students to take advantage of these opportunities in the academic-scientific field to complement their training process in medical research and education, which has been reported as deficient in most countries in Latin America.