Scientific collaboration between researchers is one of the most important aspects in the evolution of science helping promote the quality of the studies that are carried out. In turn, it determines an increase in citations when research results are published in scholarly journals. It is interesting to explore the dynamics of scientific collaboration networks regarding co-authorship of scientific articles published in Medwave from January 2014 to September of 2017 and indexed in PubMed/MEDLINE. The largest collaboration networks occurred among authors Rada G, Corsi O and Peńa J; and, at universities and healthcare centers level, in the Faculty of Medicine belonging to the Pontificia Universidad Católica de Chile located in Santiago, Chile.


An increase in scientific collaboration is a characteristic of the evolution of science in recent decades [1] and this is determined by the multidisciplinary and increasingly specialized nature of research as well as by the benefits in terms of citation and impact [2]. This justifies the fact that the evaluation of scientific collaboration is currently based mainly on the use of bibliometric indicators and the relational analysis of the scientific networks generated by the publication of articles between researchers [3].

A scientific collaboration network is the linkage of co-authorship that exists between the different authors of research work in a discipline, as well as the number of collaborations per author and the number of articles published. In this way, two authors consider themselves connected if they have collaborated in the same article [4]. From the collaboration between authors or institutions emerges a relational structure that can help to understand, manage and predict the results of scientific production generated by groups of coauthors [3].

Figure 1 shows a bibliometric mapping of the scientific collaboration networks carried out by the full counting method [5] through the software VOSviewer version 1.6.5 [6]. This means, for example, that the authorship of an article published by three researchers is assigned to each of them with a similar weight in terms of scientific collaboration. The two bibliometric mappings were made with the same software and method.

The authors correspond to those with two or more articles published in the journal in collaboration with other researchers. The co-authorship network consists of 12 clusters in which the size of the nodes represents the number of articles and the thickness of the lines represents the intensity of the collaboration in terms of the number of manuscripts. The authors Rada G (23 links and 57 articles), Corsi O (six links and three articles) and Peña J (five links and seven articles) constitute the researchers with the greatest number of scientific collaboration networks. This representation evidences a core of central authors densely connected with other less important members (in terms of shared publications) scattered around the periphery.

The graphic representation of these co-authors through the analysis of the networks forms the groups of researchers that have published in Medwave and are connected to each other by the joint signing of works. This is of great importance because it is recognized that the gradual growth of collaborations in the different areas of research is a factor that positively influences the attraction of citations, which is favorable for both authors and journals [4].

Figure 1. Bibliometric mapping of the co-authorship and scientific collaboration networks of articles published in Medwave from January 2014 to September 2017 and indexed in PubMed/MEDLINE.

In the last century, 80% of the articles were signed by an author. As science has evolved and investigations become more complex and specific, researchers turn to advisers in various fields and interact with other research teams. As a result of this, at the beginning of our century, this trend has been completely reversed and authorship is multiple in 80% of cases [7].

This has allowed the development of novel projects with important implications for the health of human populations [8]. The collaboration indicators offer a dimension of the concurrence and the degree of cooperation of the different authors in the realization of the investigations. Collaboration is necessary for the development of disciplines and scientific knowledge because it allows sharing resources and knowledge [9].

Table 2 lists the most productive universities and institutions (over four articles) in the period evaluated. In the first place is the Pontifical Catholic University of Chile with 182 articles. In the second place is the Peruvian University of Applied Sciences with 14 articles as well as the National University of Trujillo (Peru) and the Scientia Clinical and Epidemiological Research Institute with eight articles respectively.

Table 2. Most productive universities and institutions (over four articles).

Specifically at the level of universities and healthcare centers, the largest collaborations were registered in the Faculty of Medicine belonging to the Pontifical Catholic University of Chile located in Santiago, Chile (35 links). The Department of Clinical Epidemiology and Biostatistics of McMaster University, Hamilton, Canada and the Evidence Based Medicine Program of the German Hospital in Buenos Aires, Argentina, continue with six links. Then, continues with five links the Faculty of Medicine of the San Sebastián University located in Concepción, Chile and the Department of Internal Medicine of the Dr. Víctor Ríos Ruiz Healthcare Complex located in Los Angeles, Chile. (Figure 2). These results demonstrate to a certain extent the progressively international profile of Medwave.

Figure 2. Bibliometric mapping of the scientific collaboration networks at the level of institutions in articles published in Medwave from January 2014 to September 2017 and indexed in PubMed/MEDLINE.

I agree with Gonzalez et al. in 2010 [10], when they argue that one of the advantages of these representations is that they allow researchers and professionals to discover connections with authors from other disciplines, as well as the dynamics of interconnection and interdependence among scientists.

On the other hand, the evolution of collaboration networks over time allows us to know if the field has experienced an increase in the number of participants or links over the years [9], which was corroborated by Abbasi in 2016 [11] in a longitudinal study that evaluated the creation of scientific cooperation networks in Australia. It also allows researchers to broaden their circle of contacts, encourage participation more broadly in forums for discussion and exchange of ideas and the expansion of working groups and networks or the integration of new members into them [12].

The institutional collaboration is another aspect of great interest that should be commented. One of the obvious benefits of this collaboration is the possibility of participating in multicenter clinical trials, including access to the collective wisdom of leading experts, the state of the art on treatments and technologies as well as ongoing research programs, among others [9].

As can be seen, the collaboration networks in Medwave at the level of universities and healthcare centers are led by researchers from different countries. External collaboration is associated with greater productivity and is an important factor in attracting citations and increasing impact [13]. Narin et al in 1991 [14] found that papers written by scientists affiliated with institutions from more than one European Union countries were cited two times more than those written by scientists working in a single institution within the same country, concluding that the national collaboration increases the citation 1.5 times while the international one does it 2.5 times.

Also the integration of the authors in research groups and the larger size of the groups are variables that, in some Spanish clinical journals, have been related to the degree of citation that they have received, and consequently, with the increase of their impact factor, together with the publication in English and the foreign nationality of the first signer [15]. In addition, another important factor in the attraction of citations is the geographic distance between the countries of the authors that collaborate in their research, a fact reported in different investigations [16],[17],[18].

This study has inherent limitations due to not having had access to the Scopus database. Thus, the metadata of the articles published in the evaluated period could not be downloaded for performing other interesting analyses such as the scientific collaboration networks at the country level. Similarly, from the data of Scopus, it would have been possible to carry out deep analyses of the citations between the authors, countries, journals and institutions.

However, the analysis carried out allows us to infer that scientific collaboration improves, accelerates and increases the quality of research and Medwave constitutes an ideal space to disseminate its results since to contribute to the dissemination of shared knowledge is among its objectives.

Declaration of conflicts of interest
The author has completed the ICMJE's Conflict of Interest declaration form, and declares that he has not received funding for reporting; has no financial relationships with organizations that might have an interest in the published article in the past three years; and has no other relationships or activities that could influence the published article. Forms can be requested by contacting the author responsible or the editorial management of the Journal.

Financing
The author states that there were no external sources of funding. 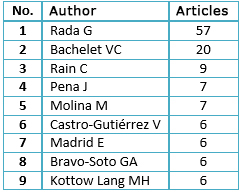 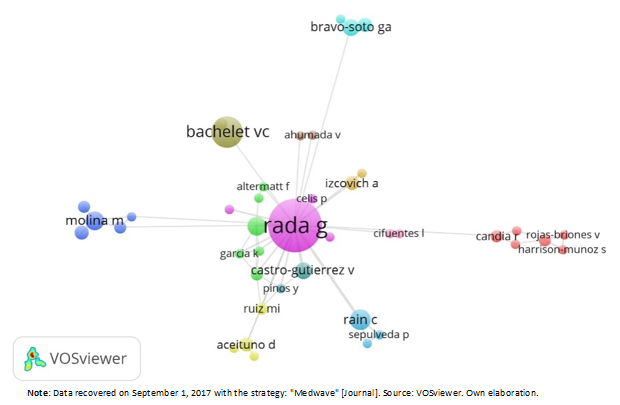 Figure 1. Bibliometric mapping of the co-authorship and scientific collaboration networks of articles published in Medwave from January 2014 to September 2017 and indexed in PubMed/MEDLINE.

Table 2. Most productive universities and institutions (over four articles).

Figure 2. Bibliometric mapping of the scientific collaboration networks at the level of institutions in articles published in Medwave from January 2014 to September 2017 and indexed in PubMed/MEDLINE.

Scientific collaboration between researchers is one of the most important aspects in the evolution of science helping promote the quality of the studies that are carried out. In turn, it determines an increase in citations when research results are published in scholarly journals. It is interesting to explore the dynamics of scientific collaboration networks regarding co-authorship of scientific articles published in Medwave from January 2014 to September of 2017 and indexed in PubMed/MEDLINE. The largest collaboration networks occurred among authors Rada G, Corsi O and Peńa J; and, at universities and healthcare centers level, in the Faculty of Medicine belonging to the Pontificia Universidad Católica de Chile located in Santiago, Chile.

Ebadia A, Schiffauerova A. How to become an important player in scientificcollaboration networks? Journal of Informetrics. 2015;9:809-825. | CrossRef |

Abbasi A. A longitudinal analysis of link formation on collaboration networks. Journal of Informetrics. 2016;10:685-692. | CrossRef |