Alfa-1 receptor blockers are prescribed to reduce urinary tract resistance. Blockade of α1 adrenergic receptors inhibits vasoconstriction induced by endogenous catecholamines; vasodilation may occur in both arteriolar resistance vessels and veins. The result is a fall in blood pressure due to decreased peripheral resistance. The magnitude of such effects depends on the activity of the sympathetic nervous system at the time the antagonist is administered, and thus is less in supine than in upright subjects and is particularly marked if there is hypovolemia. The fall in blood pressure is opposed by baroreceptor reflexes that cause increases in heart rate and cardiac output, as well as fluid retention. According to a meta-analysis by Nickel JC et al. [1] terazosin, a highly prescribed alfa-1 blocker, is associated with high clinical incidence of hypotension.

To our knowledge, this is the first case of acute myocardial infarction apparently induced by terazosin reported in the available literature. We found only one case report of a mechanic complication of acute myocardial infarction (AMI) due to a dynamic obstruction of the left ventricular outflow tract (DOLVOT) related to cilostazol administration [2].

There is not much literature respect to the incidence of acute ischemic events in patients under treatment with terazosin. In a case-control study there was not possible to demonstrate an association between the administration of terazosin for the treatment of benign prostatic hyperplasia (BPH) and admissions secondary to acute coronary events [3]. An experimental study in isolated perfused hearts evaluated the effect of four alpha adrenergic antagonists (prazosin, doxazosin, bunazosin and terazosin) on coronary occlusion-reperfusion injury demonstrating that prazosin and doxazosin augmented the infarct size, while terazosin had no effect compared with controls. [4]

We present the case of a 71-year-old man under treatment with enalapril 10 mg every 12 hours with good control of hypertension and terazosin 5 mg once a day as treatment for benign prostatic hyperplasia since long time. He had no other cardiovascular risk factors and had no previous cardiac symptoms. He had a very good functional physical capacity. The patient was admitted to our hospital complaining of chest pain. During the morning he experienced severe headache and his blood pressure reached 220/110 mmHg. He immediately self-medicated with terazosin 5 mg orally. One hour later he suffered an episode of syncope. After regaining consciousness, the patient felt a moderate chest pain. Four hours later he presented at the emergency department still in pain, blood pressure was 150/90 mmHg in both arms and carotid pulses were hyperdynamic. Cardiac auscultation revealed a systolic ejection murmur grade 3 according to the Levine scale located at the aortic area and lung fields were clear. First ECG showed sinus rhythm with an averaged ventricular rate of 90 beats/min, pathological Q waves and ST segment elevation in precordial and inferior leads (Fig. 1A). Coronary angiography was performed immediately, demonstrating the presence of chronically occluded mid left anterior descending coronary artery (Figure 1B). Transthoracic echocardiography revealed a ventricular diastolic diameter of 54 mm and sigmoid interventricular septum with basal septal hypertrophy. LVEF was estimated at 51% by Simpson's rule. Mid-septal, septal-apical and apex segments showed akinesia, otherwise basal segments were clearly hyperdynamic. A systolic anterior movement (SAM) of the mitral valve was detected, as long as dynamic left ventricular outflow tract obstruction (DLVOTO), with resting pressure gradient of 48 mmHg, which increased to 108 mmHg during Valsalva maneuver. Intravenous administration of beta-blockers (atenolol) was immediately followed by the disappearance of chest pain and systolic murmur. During the following 12 hours serum troponin dosage increased to 14 ng/ml (normal value: less than 0.04 ng/ml) and serial ECGs showed deep inverted T waves through precordial leads (Fig. 1C).

Cardiac MRI was performed one month later and confirmed the presence of ischemic cardiomyopathy, with an infarct scar located at the apex, and partially at the septum and inferior wall. Late enhancement sequence showed no myocardial viability. Midseptal and apical septal segments were akinetic whereas basal-septal segment showed marked hypercontractility. There was asymmetric septal hypertrophy characterized by sigmoid morphology with a ratio of 1.28 septal to inferior wall. LVEF was slightly diminished (51 %). SAM of the mitral valve and left ventricular outflow tract (LVOT) jet acceleration were remarkable findings. Some of these findings are illustrated in Figure 2. 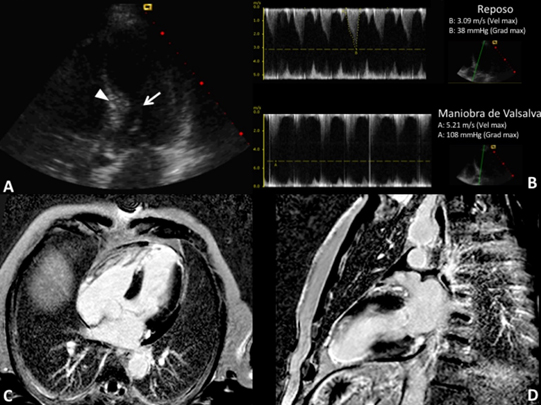 Dynamic left ventricular outflow tract obstruction may be induced or exacerbated by ischemia in different clinical situations as myocardial infarction, severe heart failure [5] or others less frequent. Although the presence of a sigmoid interventricular septum is generally considered normal in the aging process, usually carrying no clinical significance, there have been several cases associated with dynamic left ventricular outflow tract obstruction since first report of Fukuda N et al. in 1984 [6]. From a pathophysiological point of view, peripheral vasodilator effect of terazosin could have provoked a reduction in LV preload and afterload. These effects may have induced an increase in adrenergic tone and hypercontractility of LV basal segments associated with mitral SAM and dynamic LVOT obstruction, probably causing the syncope because of cerebral hypoperfusion.

Myocardial infarction, probably reinfarction, may have been the direct result of low coronary perfusion pressure, secondary to increased left ventricular to aorta gradient, in a patient with chronically decreased coronary reserve and not by rupture of a vulnerable atherosclerotic plaque. Therefore, this case corresponds to a type 2 myocardial infarction secondary to ischemic imbalance, according to the Third Universal Definition of Myocardial Infarction [7]. Left ventricular ischemic dysfunction leading to reduced cardiac output and increased adrenergic tone, may have induced a vicious circle, with further increase in gradient and reduction in coronary perfusion pressure. This vicious circle was neutralized by immediate administration of fluids and intravenous beta blockers, which decreased left ventricular outflow tract obstruction (LVOTO) gradients by reducing basal hypercontractility, increasing LV filling and size and reducing heart rate. Targeting heart rate below 60 to 70 bpm has been suggested to ensure adequate cardiac inhibition and reduction of left ventricular outflow tract obstruction.

Even though this is a rare case, it evidences the necessity of an adequate clinic valuation and good knowledge of pathological antecedents of patients before the administration of medication with an important vasodilator effect as terazosin has.

Ethical aspects
The authors did not ask for informed consent to the patient because they used only anonymous images that cannot identify him.

Conflicts of interest
The authors completed the ICMJE declaration of conflicts of interest, translated into Spanish by Medwave, and declare they have not received funding for the completion of the report; have no financial relationships with organizations that may have interests in the article published in the last three years; and have no other relationships or activities that could influence the published article. Forms can be requested by contacting the responsible author or editorial direction of the Journal.