Acute aortic syndrome includes a group of diseases that have clinical similarity in their natural history, the most important characteristic being their association with a high vital risk. The diagnosis and management of aortic dissection depends on the degree of aortic involvement according to the location of the lesion, as defined by the Stanford classification. In this syndrome, chest pain is considered the cardinal symptom; however, there are situations where clinical feedback is difficult. We present the case of a patient who debuted with a Stanford A aortic dissection, with an indication for surgical resolution in the acute phase, but who unexpectedly presented unspecific clinical manifestations. An opportune diagnosis was not obtained. After repeated consultations for changes in his symptoms, the definitive diagnosis was determined through imaging study, evolving favorably with ambulatory therapy.

The acute aortic syndrome includes a group of diseases that have clinical similarity in their natural history, the most important characteristic being the association with a high mortality rate. This group of catastrophic pathologies are potentially fatal and determine a cardiovascular urgency that demands an early and timely diagnosis to prevent life-threatening situations[1]. Among the conditions that define this syndrome are the following: aortic dissection, intramural hematoma, and penetrating atherosclerotic ulcer[2]; three entities that, despite having different physiopathological mechanisms, can coexist and have similar symptoms and signs that determine their clinical similarity.

The diagnosis and management depend on the degree of aortic compromise according to the localization of the injury. The two known classifications are the Stanford and DeBakey classifications with the former more commonly used. The Stanford classification is organized into two types: Type A (involving the ascending aorta) and Type B (considers the descending aorta)[3]. A Stanford Type A demands urgent surgical treatment given the high life risk involved. However, most of these conditions are underdiagnosed due to the non-specificity of their symptoms, associated with high morbidity and mortality[4], which remains a challenge to diagnose and treat.

After informed consent, we present the case of a 48-year-old male patient, with no significant morbid or family history, with a pack-year index of 5 for active smoking. The patient consulted for oppressive precordial pain of abrupt and intense onset, with a 10 / 10 score on the Visual Analog Scale for Pain of 3 hours of evolution, irradiated to the dorsum and which associated with severe dyspnea in regression. After re-evaluating the intensity of the pain, a 5 / 10 score on the Visual Analog Scale stands out. Upon physical examination, the patient was awake, oriented in time-space-person, hydrated and well perfused. Regular heart rhythm in two beats, without auscultation of heart murmurs or pericardial rub. No carotid murmurs were auscultated and jugular venous distension was not found upon examination. Pulmonary and abdominal examination showed no significant findings, and lower extremities were symmetrical with preserved peripheral pulses. The suspicion of coronary syndrome is established and an electrocardiogram and cardiac biomarkers are requested. The first was reported in sinus rhythm without significant alterations, and the biomarkers were negative. In this context, the initial suspicion is discarded and medical discharge is made.

After 24 hours, patient re-consults for chest pain persistence, with a lower intensity, with a Visual Analog Scale for Pain score of 3 / 10. Electrocardiogram and biomarkers were requested, which didn’t present changes in contrast to the previous ones. In this context, the patient is discharged again, without any specific diagnosis, associating this situation with a probable state of stress.

After one month since his last attention, he returned to consult for nonspecific abdominal pain and left lower limb pain associated with weakness and impaired gait. At the physical examination, no suggestive elements of the reason of consultation were found; therefore, a computed tomography of the abdomen and pelvis was requested and consultation to vascular surgery was made. The imaging study reported signs of aortic dissection with the involvement of the celiac trunk and superior mesenteric artery. This finding motivated further work-up with angio-CT of the thorax, which confirmed an aortic dissection Stanford A (Figure 1), with an extension of the flap of brachiocephalic arterial trunk dissection and involvement of the common carotid (Figure 2). Meanwhile, the vascular surgery team requested the study of both lower extremities by Doppler ultrasound. That study warned a grade 2-C pattern of left iliac arterial-femoral flow with an asystolic component. In this context, surgical intervention was ruled out, and the patient was referred to cardiology for continuity of management and risk stratification.

Figure 1. Angio-CT of the thorax with cross section. Stanford Type A Aortic Dissection in the Aortic Arch.

Figure 2. Angio-CT of the thorax with longitudinal section at the left paravertebral level.

Complementary studies were made, which reported an echocardiography without structural alterations and with normal systolic function, effort test without signs of ischemia, blood pressure Holter under normal limits, arrhythmia Holter with isolated monomorphic ventricular extrasystole, normal HOMA test and lipid profile, homocysteinemia in 13.4 uMol/lt, glycemia: 93.0 mg/dl and catecholamines in urine and plasma renin within normal limits. Given these findings, treatment with bisoprolol and amlodipine was initiated, achieving good compliance and adequate clinical response with both. After two months of treatment, the patient reported cessation of pain in the left leg while walking, along with an improvement in his quality of life.

Stanford A aortic dissection is a very grievous clinical condition that requires urgent surgical manage due to its high mortality rate. Among its clinical manifestations, chest pain is considered the cardinal symptom due to its high frequency, occurring in 84.4% of the cases[5],[6].  Pain is described as a ventral pain; penetrating, sudden, intense, sometimes oppressive, that can radiate to the neck, jaw, arms, dorsal and interscapular area, abdomen, pelvis and the proximal thighs, and its non-responsive to standard analgesic treatment. However, there are situations that, due to the ambiguity of clinical manifestations, delay the diagnosis. These include isolated abdominal pain (30%), migratory pain (19%), or in the absence of pain, other manifestations such as syncope (13%), pulselessness (30%) congestive heart failure (20%), cardiac tamponade (18%), focal neurological deficit (12%), stroke (11%), transitory ischemic attack (20%)[5],[6], fever of unknown origin or sudden death (4%)[7]. These situations determine a clinical challenge for the physician, as they increase the morbidity and mortality of the patient.

It should be noted that the clinical suspicion of aortic dissection can be based upon the presence of risk factors, among which arterial hypertension is the most common (77,8%)[7]. This condition produces the thickening of the tunica intima, fibrosis, calcification and extracellular deposit of fatty acids. In response to this, the extracellular matrix undergoes accelerated degradation, apoptosis and elastolysis with final disruption of the tunic. In addition to arterial hypertension, other important risk factors are white race (86,4%) male gender (66,9%), smoking (38,9%), atherosclerosis (26,5%), and obesity (11,1%), among others[8].

In this case, the first diagnostic suspicion was an acute coronary syndrome given the characteristics of the chest pain. However, the normal electrocardiogram and the negative cardiac biomarkers ruled out this hypothesis. Considering that chest pain irradiated to the back is a sensitive symptom for aortic dissection, the oppressive nature is not usually a frequent manifestation; therefore, it was ruled out as a possible scenario. Despite this, there are patients in whom this oppressive pain may present, so it is always advisable to carry out a comprehensive physical examination because it provides a better orientation to the diagnosis[5],[6]. In this case, the physical examination did not show any signs or symptoms that correlate with an acute aortic syndrome such as arterial hypertension or hypotension, focal neurological deficits, a difference in pulse amplitude between upper and lower extremities, among others, instead of developing abdominal symptoms and gait disorder described above. The result was that the diagnosis of acute aortic syndrome was wrongly ruled out, thus preventing the opportunity for prompt management.

Recent case reports suggest considering abdominal examination as a point to explore in patients with acute aortic syndrome, remembering that this is a symptom that occurs in a third of these patients. They even suggest considering chest pain reproduced after deep abdominal palpation as a possibly specific sign of acute aortic pathology[9], however, there is not enough evidence supporting it to consider it a guiding sign.

The fact that medical management was capable of stabilizing symptoms is striking, considering that surgical approach was not attempted due to poor iliac perfusion, as vascular intervention is usually advised in these cases[10]. It is known that medical management, in the absence of immediate surgical management, has a 24-hour mortality rate of 20%, 30% at 48-hours, 40% at seven days and 50% after 30 days[11]. Most common causes of death are aortic rupture due to cardiac tamponade (41.6%) and visceral ischemia (13.9%)[12]. In the case presented, none of these complications were recorded, achieving satisfactory manage without the surgical procedure.

This case is considered an atypical aortic dissection, given the low specificity of its clinical manifestations and physical findings, which led to an inappropriate clinical study. Early and timely diagnosis defines a favorable prognosis considering the high vital risk and mortality rate of acute aortic syndrome. Therefore, proposing the possibility of offering more accessible and low-cost complementary studies, together with taking into account the atypical presentations of this syndrome, provides a significant improvement in the prognosis and survival of these patients, in the context of a disease whose mortality and morbidity remain high and dependent on timely surgical management.

From the editor
The authors originally submitted this article in Spanish and subsequently translated it into English. The Journal has not thoroughly copyedited this version.

Acknowledgements
The authors thank Miss Jocelyn del Carmen Vargas Urra (Nurse), for her suggestions and points of view in the making of this article.

Ethical Aspects
The informed consent requested by Medwave, has been signed by the patient; a copy of it was forwarded to the editorial direction of the magazine.

Funding
The authors declare that there were no external sources of funding.

Conflicts of Interest
The authors have completed the declaration of conflicts of interest form of the ICMJE, and declare not having received financing for the realization of the report; not having financial relationships with organizations that could have interests in the published article in the last three years; and not having other relationships or activities that could influence the published article. The forms can be requested by contacting the responsible author or the editorial direction of the Journal.

Editor's note
The corresponding author declares that this manuscript is an honest, accurate and transparent transcription of the study being reported; that no important aspects of the study have been omitted; and that discrepancies between the study results and those anticipated (if relevant) have been recorded and explained. 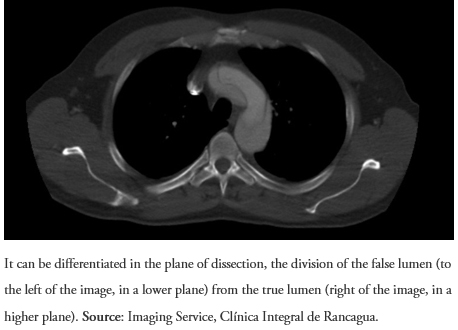 Figure 1. Angio-CT of the thorax with cross section. Stanford Type A Aortic Dissection in the Aortic Arch. 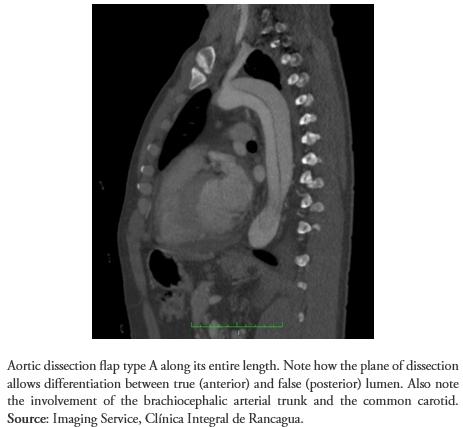 Figure 2. Angio-CT of the thorax with longitudinal section at the left paravertebral level.

Acute aortic syndrome includes a group of diseases that have clinical similarity in their natural history, the most important characteristic being their association with a high vital risk. The diagnosis and management of aortic dissection depends on the degree of aortic involvement according to the location of the lesion, as defined by the Stanford classification. In this syndrome, chest pain is considered the cardinal symptom; however, there are situations where clinical feedback is difficult. We present the case of a patient who debuted with a Stanford A aortic dissection, with an indication for surgical resolution in the acute phase, but who unexpectedly presented unspecific clinical manifestations. An opportune diagnosis was not obtained. After repeated consultations for changes in his symptoms, the definitive diagnosis was determined through imaging study, evolving favorably with ambulatory therapy.