Acute otitis media is one of the most common infectious diseases diagnosed in children. Antibiotic treatment use remains controversial. This summary aims to evaluate the effectiveness and safety of antibiotics in children with acute otitis media. Searching in Epistemonikos database, which is maintained by screening 30 databases, we identified six systematic reviews including 18 randomized trials. We combined the evidence using meta-analysis and generated a summary of findings table following the GRADE approach. We concluded antibiotics reduce pain at 48-72 hours and reduce the risk of tympanic perforations in children with acute otitis media, but they do not reduce late recurrences and increase the risk of side effects (rash, vomiting and diarrhea).

Acute otitis media is defined as the presence of tympanic effusion (demonstrated by pneumatic otoscopy, fluid level or impedanciometry) associated with signs and symptoms of acute inflammation of the middle ear. Acute otitis media occurs more frequently in children at an early age and the most serious complications are mastoiditis, meningitis and tympanic perforation.

The use of antibiotics for the treatment of acute otitis media varies considerably among countries because its real efficacy and safety have not been determined. On one side, the expected benefits of antibiotics include reducing the number of complications, the duration of symptomatic stage and the risk of recurrences. On the other side, the inappropriate use of antibiotics can cause adverse effects and increases antibiotic resistance. 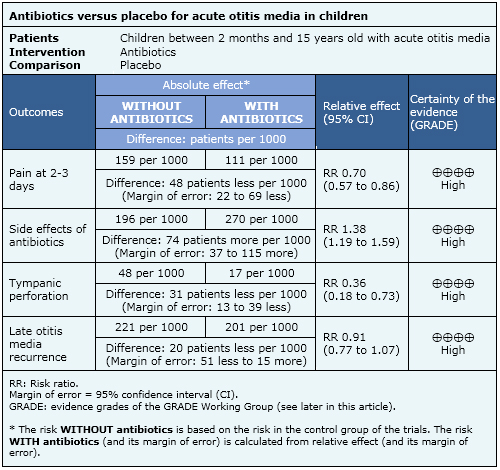 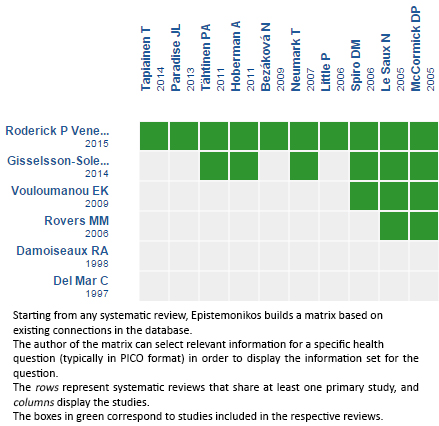