With the rapid increase in the number of studies and reports, different methodological designs have emerged to synthesize and analyze this information. This is the case of systematic reviews, which have long been considered the highest level in the hierarchy of evidence. The use of explicit and clear methodologies in their elaboration and analysis of systematic reviews have increased confidence in them for decision-making in small and large scale clinical practice. It has recently been proposed that systematic reviews can be viewed as the lens through which existing evidence is viewed and applied, rather than a level of evidence per se, due to their methodological characteristics [1].

In response to this concern, network meta-analysis was proposed in 2002 as a statistical procedure for evidence synthesis capable of comparing different therapeutic alternatives through direct and indirect comparisons [3]. Previously, some generalities regarding network meta-analysis and its methodology have already been reviewed [4],[5],[6],[7]. However, though time and the dissemination of analysis techniques added to the network meta-analyses advantages – i.e., their ability to synthesize mixed evidence (arising from direct and indirect evidence) – there has been an increased number of publications using this method. This generates a greater weighting of these meta-analyses when it comes to informing health care decisions. In fact, by performing a quick search in the PubMed database of papers indexed under the MeSH term "Network Meta-Analysis" it is possible to see an increase in publications of more than 15 times between 2010 (155 papers) and 2021 (2583 papers). There are also initiatives such as Cochrane Training, where the fundamentals and necessary tools to perform a network meta-analysis are taught. However, before questions related to the execution, it is necessary to bring clinicians closer to this methodology, discuss some important concepts for understanding network meta-analyses, and comment on their contribution to the certainty of the evidence on a given clinical question.

This the tenth article in a methodological series of narrative reviews on general biostatistics and clinical epidemiology topics, which explore and summarize in a friendly language published articles available in the main databases and specialized reference texts. The series is oriented to the training of undergraduate and graduate students. It is carried out by the Chair of Evidence-Based Medicine of the School of Medicine of the University of Valparaíso, Chile, in collaboration with the University Institute of the Italian Hospital of Buenos Aires, Argentina, and the Evidence Centre UC, of the Catholic University of Chile.

This manuscript aims to present basic concepts about network meta-analyses, their methodological assumptions, their particularities for interpreting analyses and results, and their advantages for evidence synthesis and informed decision-making in health.

What are network meta-analyses?

Unlike standard single-comparison (or pairwise) meta-analyses, network meta-analyses evaluate different interventions for a given condition in the same analysis [9]. This makes it possible to establish the relative hierarchy estimate about the studied outcome. The latter makes it a promising tool for assessing the relative effectiveness compared between different interventions and, in a sense, a necessary method for synthesizing the growing amount of information available to clinicians for decision-making [3],[10].

In these figures, each network node (treatment nodes) represents a different intervention. Their size indicates the number of patients randomized to that intervention proportionally. The connecting lines between nodes represent direct comparisons rescued from randomized clinical trials. Conversely, when there are no connecting lines between two nodes, no clinical trials comparing the two interventions were identified. Similarly, the width of the lines is proportional to the number of studies included for each pair of interventions [12].

To exemplify network geometries [9], Figure 2a shows a "star network", where the interventions to be compared (B-C-D-E-F-G-H) do not join, showing the lack of direct evidence linking them. However, all the interventions are linked to a single common comparator (A), which allows us to estimate a measure of effect without direct comparisons. Concretely, node A could represent placebo and the other nodes as active interventions. Figure 2b shows a "well-connected network", where each node is linked to the other interventions forming a highly interconnected and complex network geometry. This translates the existence of direct evidence for each linked intervention comparison [9].

First, as in systematic reviews with single-comparison meta-analyses, it is necessary to assess both clinical and methodological heterogeneity [12]. This is because the inputs needed to perform the meta-analysis comes from different primary studies whose results may be affected by other variables and not only by the interventions studied. Indeed, it is possible to assess the heterogeneity of the different direct network comparisons using the same methods used in paired (or standard) meta-analyses [8]. However, a fundamental assumption for the validity of network meta-analyses is that there are no other differences between the included clinical trials besides the interventions to be compared [9].

There are modifying effects that oppose this first assumption and may alter the effects reported in network meta-analyses [11]:

In network meta-analyses, there is also another source of variability other than heterogeneity due to the inclusion of studies evaluating different interventions [3].

In this sense, a critical assumption for the validity of network meta-analyses is the transitivity assumption, which assumes that there are no systematic differences between the included studies, except for the interventions [13].

Consistency can be evaluated statistically. It is a requirement to calculate this to obtain a valid mixed estimator for each of the interventions compared in the network meta-analysis [13].

If an inconsistency is identified, it is prudent to check for errors in data extraction. The possible modifying effects in the studies in which inconsistency is present should then be examined in more detail [12]. If the inconsistency is substantial and its source is not identifiable, synthesizing the information by network meta-analysis is discouraged [12].

A novel point in the analysis of evidence performed in network meta-analyses is the synthesis of indirect evidence. When this is related to direct evidence, it allows a single effect estimator to be obtained for a given pair of interventions. This is called "combined or mixed estimation" [10]. For this to be possible, any network meta-analysis must evaluate and meet the assumptions that have been previously reviewed. However, the main requirement for the statistical analysis of network meta-analyses is that the interventions included in the analysis relate to each other by forming a connected network [8].

The analysis of mixed evidence in network meta-analyses is carried out using complex statistical techniques of meta-regression [16]. These techniques provide effect estimates in terms of probabilities for each of the interventions included in the meta-analysis.

Presentation of results in network meta-analyses

Through the comparisons made by network meta-analyses, it is possible to obtain the relative therapeutic effectiveness between any pair of interventions in the network. The presentation of the results of mixed evidence analysis is generally through tables or matrices that order all the obtained information (direct, indirect, or mixed evidence) [12], with their respective effect estimators (usually in odds ratio or relative risk) and uncertainty [13]. The results of each pair of comparisons can be presented using Forest plot graphs (Figure 3) that summarize the effect estimators and their confidence intervals.

This table type makes it possible to show all the effect estimators between the different pairs of interventions for a maximum of two outcomes (outcomes 1 and 2 in Table 1) [12],[16],[17].

In most cases, clinical decision-making is based on a probability analysis. Network meta-analyses provide many estimated effects, which can complicate the decision to prefer one or another of the interventions included in the network. For this reason, network meta-analyses results must be provided in an organized and hierarchical manner [16]. This facilitates identifying the best therapeutic option among the compared interventions through a graphic and ordinal arrangement of the interventions evaluated with their effectiveness.

How to assess the certainty of evidence in systematic reviews of multiple treatments with network meta-analysis?

The Grading of Recommendation, Assessment, Development, and Evaluation (GRADE) approach is a widely used system to determine the degree of certainty of evidence in systematic reviews by analyzing five components. There is an article in this methodological series that deals with this subject in depth for more details [21].

To assess the degree of certainty of the evidence of network meta-analyses, it has been proposed to use the GRADE model with some modifications [15],[22] derived from the use of indirect evidence, the differential contribution of the different sources of direct evidence to the final effect, the assumption of transitivity for the assessment of mixed evidence, and the possibility of inconsistency between direct and indirect evidence.

The ranking of treatments estimate is done from the entire evidence network, while the effect size estimate between paired comparisons is done by incorporating results from direct and indirect sources. In this case, direct evidence weighs most heavily on the final estimated effect [15]. Due to the nature of the results offered by network meta-analyses, it has been proposed to evaluate the certainty of the evidence for the findings related to the effect size between each network comparison and for the ranking of treatments.

Although it is possible to analyze the five GRADE domains [15] for each effect estimator, this can be inconvenient when assessing each paired comparison present in a network meta-analysis. This is also true for assessing certainty in ranking, guided by the domains of the GRADE tool. In addition, there is a certain degree of subjectivity, for example, in the assessment of imprecision, which is based on the observation of rankograms.

Nevertheless, there are proposals based on the GRADE approach that focuses the analysis on two elements:

As shown in Figure 5, the GRADE working group does not currently include evaluating the imprecision of direct estimates [22], unlike other working groups that include this, based on the common GRADE evaluation framework [15].

Network meta-analyses, also called meta-analyses of multiple interventions, are a form of evidence synthesis that allows maximizing the use of available information, especially when multiple interventions are available for a single condition. This type of meta-analysis allows combining direct evidence (arising from direct comparisons) and indirect evidence from the comparisons included in the network, which is called mixed evidence.

Because of these peculiarities, network meta-analyses provide an avenue of analysis with "more background" for those who need to decide between multiple interventions. In addition, they seek to maximize the extraction of information from the currently available evidence. However, for their estimates to be valid and consistent, it is essential to assess the clinical and methodological homogeneity of the included studies. Finally, it is also necessary to evaluate the presence of systematic differences when extracting indirect evidence. 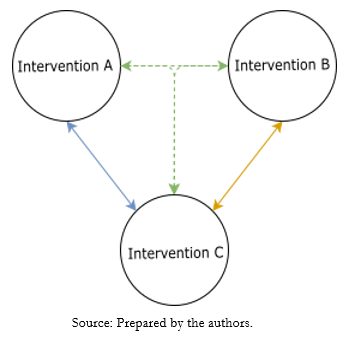 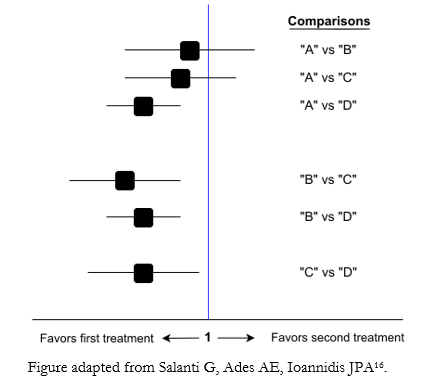 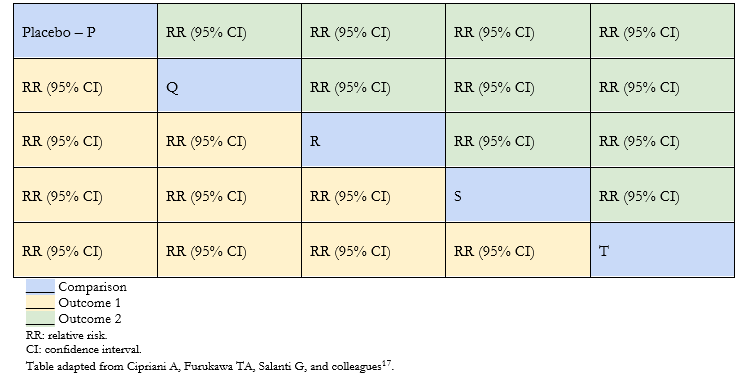 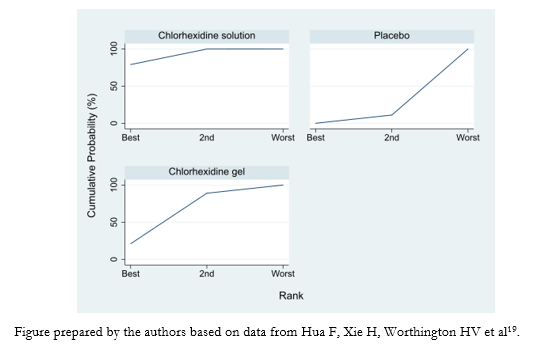 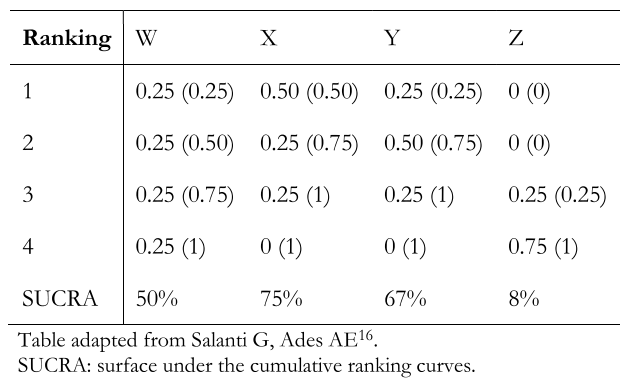 The authors completed the ICMJE conflict of interest statement and declared that they received no funds to complete this article. In the last three years, they had no financial relationships with organizations that may have an interest in the published article and they have no other relationships or activities that may influence this publication. Forms can be requested by contacting the corresponding author or the journal.

The authors declare that they have no external sources of funding associated with this article.

Given the attributes of the study, no ethics committee was required.

The data used for this study are available upon request from the corresponding author.