Moving towards a destination: considerations about cohort studies in less than 1000 words

Cohort studies are observational designs that follow a group of subjects with one or more common characteristics over time. These designs involve periodic measurements to check for the occurrence of an outcome, event, or disorder which is being studied1-4. The term has a historical origin: in the Roman legions, six centuriae of soldiers marching in the battle field toward various destinations were given the name cohorts (cohors). The destinations varied depending on the group to which they belonged2,5. This is very similar to what occurs in this type of design, wherein groups of individuals advance toward an outcome, and the frequency can be determined by one or more factors to which they are exposed.

The design of a cohort study is similar to that of a clinical trial, which is considered to be the most suitable for causal inference13. One major difference, however, is that exposure occurs naturally, since it is determined by preferences, clinical decisions, or other conditions. In clinical trials, the latter is directly assigned by the researcher6.

From this viewpoint, cohorts are considered to be prospective and analytical designs2,3. Nevertheless, it is also possible to find retrospective versions where researchers gather existing data among patients that have or have not shown an outcome. As there is a follow-up process after exposure to an event, the cohort denomination also applies to this last design. The big difference between case studies and controls is that the cohorts which are to be contrasted are separated on the basis of exposure to a factor, instead of the outcome. A third variant, the ambidirectional cohort, implies gathering data in two directions: existing data is taken in, from clinical records, for example, and then complemented by patient follow-up until an event develops.

Both cohorts should be similar in every relevant aspect, which is very difficult to achieve in these studies due to their observational nature. This means they are susceptible to confusion bias, wherein other variables, which are different to the exposure being studied, could explain the results6.

Table I provides a comparison between positive aspects and the complexities of cohort design.

The proper selection of participants, the rigorous recording of possible exposure factors, and the regular and objective control of the occurrence of events constitute the key to the proper development of this type of study2-4.

The individuals may belong to a general population, as in the Framingham study that contributed key information on cardiovascular risk factors14-26, or specific social groups7-9,11,12, such as a cohort of 40,633 English physicians that established a link between smoking and various events of interest10,27-33.

A cohort can also be selected on account of a specific type of exposure, such as environmental pollution, radiation, or occupational hazards. In these cases, that is to say, studies that cannot be assessed experimentally due to ethical reasons, this design proves ideal4.

The first aspect to be assessed in a cohort study is the similarity of the contrasted groups. This is achieved with a table of characteristics of the individuals being studied, which should be reported in any study of this type. In the event of imbalances, certain statistic techniques for multivariate analysis, such as regressions, can make it possible to adjust the analysis to account for the differences among groups.

In September 2004 a panel of experts issued a consensus checklist for reporting observational studies, known as STROBE (Strengthening the Reporting of Observational studies in Epidemiology). The checklist includes items such as title, abstract, introduction, methods, results and discussion sections for articles35. The STROBE initiative was conceived as a list of items for checking the report, and under no circumstances as an instrument for testing the quality of the observational study. Other tools have been put in place for this purpose36

Measures of association in cohort studies can be expressed as probabilities (risks) when all individuals are followed for the same amount of time. They can also be expressed as rates when subject follow-up differs, by using a measure of people/time in the denominator. The manner in which these measures are calculated is shown in Figure 1. Thus, and as with clinical trials, it is desirable for cohort studies to ensure sufficient statistical power to detect the expected associations.

Cohort studies are observational designs that have contributed enormously to biomedical knowledge. They have inherent limitations, and hence readers should ensure that sufficient control measures, such as confusion bias, are provided by the researchers. 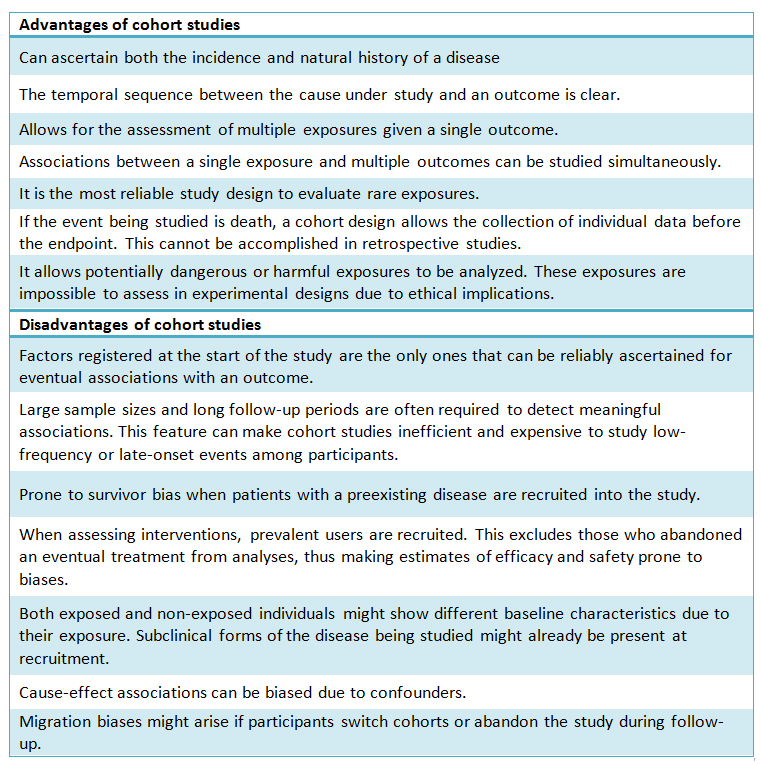