INTRODUCTION
Acute mountain sickness is a common condition occurring in healthy subjects that undergo rapid ascent without prior acclimatization, as low as 2500 meters above sea level. The classic preventive agent has been acetazolamide, although in the last decade there has been evidence favoring ibuprofen. However, it is unclear which method is more efficient.

METHODS
We searched in Epistemonikos, the largest database of systematic reviews in health, which is maintained by screening multiple information sources, including MEDLINE, EMBASE, Cochrane, among others. We extracted data from the systematic reviews, reanalyzed data of primary studies, conducted a meta-analysis) and generated a summary of findings table using the GRADE approach.

RESULTS AND CONCLUSIONS
We identified two systematic reviews that included only one primary study, which is a randomized trial. We concluded it is not possible to establish whether ibuprofen is better or worse than acetazolamide because the certainty of evidence has been evaluated as very low.

Acute mountain sickness or high altitude illness is a condition that can arise when a subject ascents to more than 2500 meters above sea level without prior acclimatization. Classically, it presents as headache plus one of the following symptoms: anorexia, nausea, insomnia, fatigue or dizziness, and can progress to more severe forms of illness such as high altitude cerebral edema or high altitude pulmonary edema [1],[2].

Acetazolamide has been the most used pharmacological prevention. It inhibits carbonic anhydrase at renal level, causing bicarbonate excretion through urine and metabolic acidosis. Its effect would offset hyperventilation and respiratory alkalosis, thus favoring the physiological response to hypoxic stimuli. However, the minimum dose (from 250 mg to 750mg per day) is still controversial.

An alternative treatment that has gained support during the last years has been ibuprofen, due to its availability and easy access [4],[5],[6]. This drug inhibits the synthesis of prostaglandin, which increases microvascular permeability at the brain as a physiopathological mechanism of acute mountain sickness. However, it is unclear which treatment is more effective.

The information about the effects of ibuprofen for prevention of acute mountain sickness is based on one randomized trial that included 343 subjects, from which 129 were randomized to ibuprofen, 125 to acetazolamide and 89 to placebo [3]. 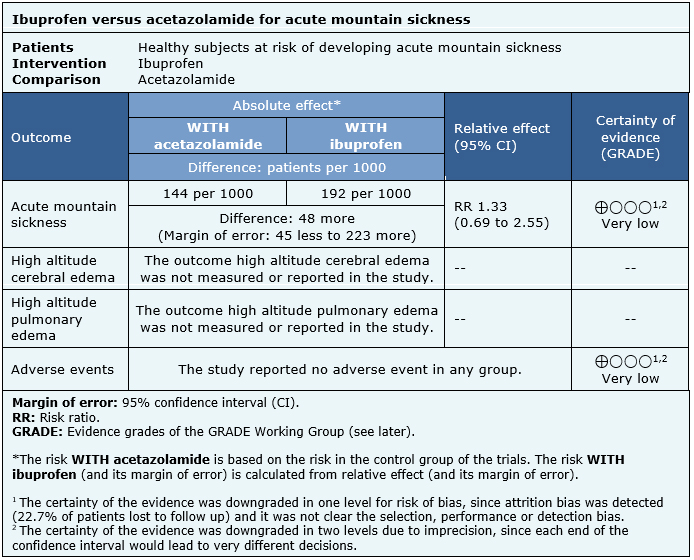 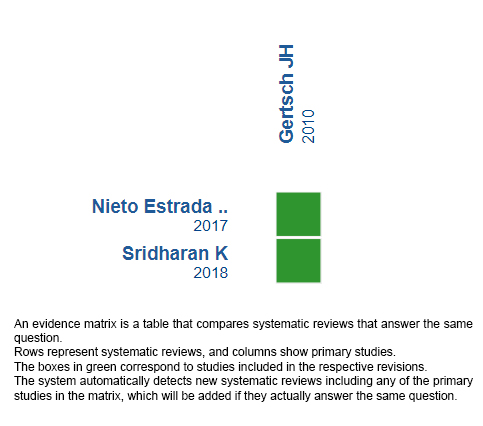